Brisbane-based indie-pop rock band Bugs performed at The Croxton Bandroom in Melbourne on Saturday night in support of their latest album release, 'Cooties'. 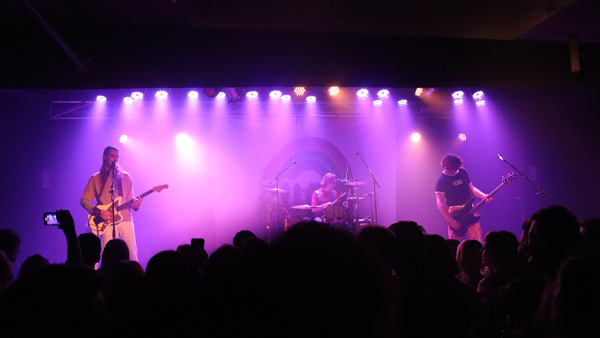 Brisbane-based indie-pop rock band Bugs performed at The Croxton Bandroom in Melbourne on Saturday night as the three-piece continued to tour in support of their latest album release,Cooties.

Having entered the Victorian leg of the tour the night before in Geelong and after visiting New South Wales, Northern Queensland, and Tasmania, Bugs were in Melbourne and set to bring their indie pop-rock sound to Melbourne, playing at The Croxton in Thornbury.

The first band to grace the stage was Queensland-based VOIID, bringing a punk rock sound to kick off the proceedings of the night. Consisting of Anji Greenwood on vocals, Kate McGuire on guitar, Antonia Hickey on bass, and Jasmine Cannon on drums, VOIID opened withVileand, from there, had the crowd who had come down early in a frenzy and bouncing around already.

VOIID followed up the opening song withNot For Youbefore launching into a couple of new, previously-unplayed and unreleased tracks, exciting the crowd with the new material to look ahead to.

The band rounded out the set withSour- while acknowledging the contents of the song being about consent, voicing a message regarding the topic -andHell- while thanking Bugs and engaging in banter about Loser's Tim Maxwell -before closing the set withBug.

After VOIID, Melbourne locals LOSER came onto the stage to inflict some indie punk-rock into the show, as a larger crowd slowly began to trickle in, encouraged by the band to move closer to the front of the stage. Tim Maxwell (vocals/guitar), Craig Selak (bass) and Jake Farrugia (drums) made up the members of LOSER, as the band began withMindless Joy.

LOSER went intoGet It All Outas the band introduced themselves afterwards and confessed they were responsible for warming the crowd up for the main event, Bugs, inviting the crowd to pick up the energy all throughout the night.

Head First,On The Edge,Don't Leave Mewere each received well by the crowd, with the band's riffs and punchy tunes riling the attendees up, a sign of things to come as the second half of LOSER's set was about to begin.

The band playedTime Won't Waitnext in a continuation of their latest album,All The Rage, which was released last year, as the energy picked up intoLazy,Skyward, andLoserto close out the set.

With the crowd building and more and more people coming through the doors with Bugs' set drawing nearer, excitement was building, helped by a curtain veiled across the front of the stage, adding suspense to the concert-goers' feelings and emotions with what they were waiting to witness.

As the time for Bugs to perform was approaching, there was little space to move within the crowd in front of the stage, all clamouring for a good spot; as the song playing over the speaker died down and the curtain opened to reveal the band, ready to rock out to a Melbourne crowd for the first time since December.

Bugs, lead by Connor Brooker (vocals, guitar), Jordan Brunoli (bass), and Brock Weston (drums), opened withComing To Get Meoff the recently-releasedCooties, which immediately had the crowd screaming and singing along, which extended into the following song,In The Middle (Of It).

Going back to the band's 2018 EPSocial Slump, Bugs played throughNeighbourhoodwhich elicited riotous applause, the fans knowing every word, with the band and crowd always in synch with singing the lyrics from the first note to the last.

Old Youth Feeling- the opener fromCooties- continued the set and continued the audience being another member of the band, screaming the lyrics back in every instance of the song. The ever-present energy continued withInstant Coffee, one of the older tracks the band played on the night, the song coming off the 2016 albumGrowing Up.

While introducing the nature and meaning of the next song - which included taking a jab at the Liberal Party with the result of the election the same night -,Diamondwas received well, with Brooker inviting the crowd to scream the words back at him, as it kick-started a string of seven songs in a row all from the latest album, withMicrowaverbeing the next track performed.

After acknowledging the toll of the last two years and providing thanks to the band's tour manager, and the chance to play at The Croxton, the band was relatable in introducing the next song,What Goes On (In Your Head)brought the mood down ever-so-slightly to a sombre feeling, but the crowd remained into it.

Bugs next playedAlone Again, but that was nowhere near the mood in the room despite the song continuing a more low-key sound of the vocals, guitar, and bass with a sprinkling of drums.Mars & Venus,Decisions, Commitments and Plans, andBridgeall followed as the night continued through its soft indie-pop sound songs that built into a louder crescendo.

Entering the final stages of the night, Bugs played a cover of fellow Brisbane artist Mallrat'sCharlie, and although it wasn't one of their own, the crowd knew the indie-pop singer's song just as much as the band made the song their own with Brooker's piercing vocals holding every note.

Bugs ended the set withSeriously, Weston bringing the band in with the sticks to force a full-blown sound that had the crowd going hard in grooving to the music, but also in, as they had done all night, making their voices heard in accompaniment with the band before the night would come to a proper close.

However, as is the norm for a lot of bands these days, and with the crowd not letting Bugs get away without one with the cries of one more song, Bugs returned to the stage almost as quickly as they hopped off, ready to perform an encore with punchy trackEsky Lid.

You can find details of and purchase tickets to the remaining dates of Bugs'Cootiestourhere.