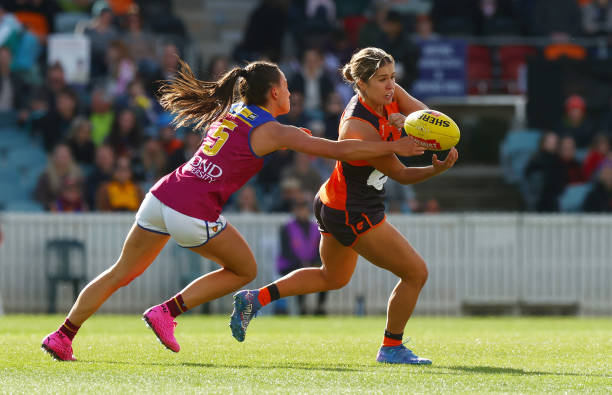 Giant ambush not enough to hold off Lions

The GWS Giants came out firing against the Brisbane Lions, but the premiership fancies fought back to take a big win.

Giant ambush not enough to hold off Lions

The GWS Giants came out firing against the Brisbane Lions, but the premiership fancies fought back to take a big win.

The Giants come out fast, looking to catch the Lions by surprise. Their ferocity early was effective, as Jess Doyle and Haneen Zreika kicked the first two goals of the match.

It looked like the Lions would be kept scoreless to quarter time, but a behind after the siren to Zimmorlei Farquharson gave the Lions a start, and from there, they got rolling.

Not only did the Giants have plenty of attack on the ball, but their defensive work was second to none in the first quarter. They kept Lions' superstar Emily Bates to just four touches, and livewire Orla O'Dywer only touched the ball once.

After quarter time though, it was a different story, as the Lions started to put their foot down. Courtney Hodder goaled within the first 30 seconds of the quarter, before O'Dwyer found the goals to put the Lions in front early in the second.

From there, the Lions accelerated away from the Giants, with Jesse Wardlaw and Greta Bodey adding to the scoreboard before the main break.

From there, the Giants ran away with the match, racking up a dominant final three quarters, as they suffocated the Giants' ball movement, and their midfield brigade started to get their hands on the ball.

It was a four goal blitz in the third quarter by the Lions that really took the game away from the Giants. Bates had two goals in two minutes, and the damage was done.

Jade Ellenger kicked off the fourth quarter with a goal, as the Lions continued to keep the pressure on. They eventually finished 47 point winners, 67-20, after a dicey first quarter.

After the game, Lions coach Craig Starcevich was pleased with how his side finished the game.

"It was a bit slow to start, obviously, but once we got going, it was ten goals to one or something from that point onwards after quarter time, so can't be too disappointed with that," Starcevich explained.

"There's some good parts about stopping the way they wanted to play it, and then getting our own game going as well, which was really pleasing."

The Lions converted 39 inside 50s for 17 scoring shots, but Starcevich wants to see more from his players as they convert opportunities.

"We led the comp last year for inside 50s. Our struggle is to convert those into scoring opportunities. So that's starting to turn a little bit at the moment, but we still feel like we're leaving a few out there.

"I think it's one of those things where in our competition, you only play a couple of practice days before you hit the season. So a lot of that connection and timing is still a work in progress.

"So in most of these seasons, this is our club seventh year in the comp, you sort of don't hit the straps until about round four or five so we've got some of that timing and synergy and connection that we're still working on."

For Bernasconi, he was pleased with the start, but after that, it was more challenging in his homecoming to Canberra.

"We had a really good plan in place during the week to try and combat one of the best sides in the competition and we executed really well early, but then as good sides do - they respond, and we struggled to totally go to the level that they go to, hence why they got on top of us.

"The positive sign is instead of rolling over in the last quarter, you know, the girls dug their heels in and they fought back."

"I thought the girls responded later in the game quite well, pretty disappointed with the result or not good to see that they're handled down."

For Bernasconi, the Giants have moved to 0-2, and his emphasis on a new, fast-moving game plan is starting to show, but is not fully effective just yet.

"We just reaffirm to the girls is that it's all about taking steps forward. Your game plan doesn't work overnight.

"We can get some really good learnings from this. And it's always nice to test it against the best to see where you're stuck up. And, for about a quarter and a half, two quarters, we're at the level. So we just know where we need to get to going forward."

The Giants' forward line showed promise early, and Bernasconi was pleased about that early showing.

"We've got a really good young forward line that probably do get underrated because of where they're at in their development. At training, we look forward to getting to the [Georgia] Garnetts and the [Jess] Doyles.

"We're trying to come up with a great game plan that isn't really, dictated on personnel and more around team and I think once we start to nail that, we'll just have different avenues to go because we know we just want to score more and, we looked like we were going to do it early on."

One of those focal points for the forward line early was Doyle, who spoke to Edge of the Crowd after the game, about the start from the Giants.

"Our backs are really good one-on-one and then once they get it, just trying to bring it out and change lanes. The focus is on doing the work early on your defender," Doyle explained.

After quarter time though, the Giants' ball movement slowed, as the Lions piled on the pressure.

"It didn't work all the time. I think we just shied away from it a couple of times and just went back to the old ways. But when you when you did say it looks good in it and it felt good as a team as well.

"It was good to use it and some let some of the fans see what what we can do and hopefully bring more up next week."

For Doyle, a goal today continues her hot streak, and she now has eight goals in nine games since her debut last season.

"I don't really think about it just happens but it's my role to teams kick goals as a forward line player," Doyle said.

"I just keep doing that as much as I can. I'm happy to get a goal. I think when the girls play and do our ball movement, it's easier for us girls in the forward line to get a mark when the backs are under pressure, so it's good for us."

On the flipside, Jade Ellenger was one of eight Lions who managed a goal today, and was pleased with how the side played in the latter stages of the match.

"We started a bit shaky but it was good to get there in the end," Ellenger told Edge of the Crowd after the game.

"We came into our own like the last five minutes of that first quarter was a bit more on our terms, but they definitely started really strong."

For Ellenger, she is finding more space on the wing this season, and is coming into her own. She is one of a number of Lions benefitting from the continuity of a side that has been largely consistent the last three seasons.

"It makes it so much easier. We love spending time together as it is so to go through the offseason together, then preseason and then another season, probably our second or third, even with the same sort of group.

The Lions are now undefeated after two weeks, and have put together the two highest scores this season. The Giants will turn their attention to their first cross-town derby against the Swans next weekend.