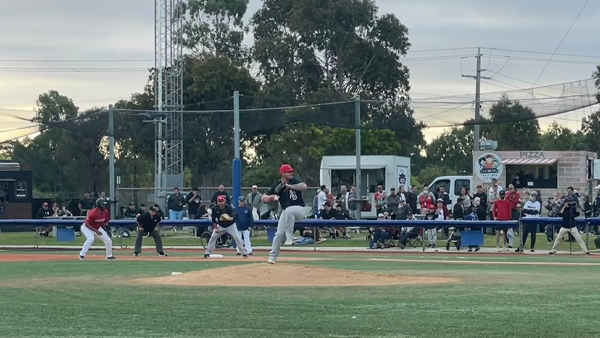 The four-run fifth inning contributed to a 7-1 Adelaide Giants win over the Melbourne Aces, as a 17-year-old phenom made history on the mound for the home side.

The four-run fifth inning contributed to a 7-1 Adelaide Giants win over the Melbourne Aces, as a 17-year-old phenom made history on the mound for the home side.

After a rain-affected, delayedGame 1 of The Melbourne Challengelast night, the Melbourne Aces and Adelaide Giants made their way to Melbourne Ballpark once again, the travelling side prevailing 7-1 ahead of decisive Game 3.

Following last night's 2-1 victory to the Aces, the Giants were out to prove themselves capable of taking it up to the back-to-back Claxton Shield-winning club and did so in a big way with offence and defence each playing their part throughout nine innings.

A four-run fifth inning from the Giants saw the team pile on the runs, unaffected by the pressure of a two-out situation, while the side continued to dominate, and run away with the contest, scoring a further two runs in the eighth, and one more in the ninth.

Veteran Team Australia pitcher Tim Atherton was strong on the mound, as the Giants pitchers limited the Aces to just one run that came in the final inning. However, it was a 17-year-old Aces pitcher who made headlines, with Gevevieve Beacom making her debut, becoming the first female to play in a professional men's team, completing a scoreless sixth inning for her side.

Adelaide started its first offensive innings of the game with a three-up, three-down dig which began with a Jack Partington groundout to third base, before Melbourne's starting pitcher Steven Kent finished off the next two batters via strikeouts.

In the bottom half, the first two Aces batters went down in succession however Jack Barrie reached first on an error - the ball bouncing between the legs of Giants first baseman Donald Lutz, and going into right field. Barrie would stand up on third as the Aces had runners on the corners after Kyle Perkins singled into centre right field, although the Giants picked up the final out, getting the force out of Perkins at second on a Jared Cruz hit to short stop.

A strikeout looking for Lutz began proceedings in the second inning before Wade McKinnon became Adelaide's first baserunner of the night, hitting a shot that caught the first base line deep in right field, sliding into second base safely for a double. He wouldn't advance as Griffin Weber and Brock Wells fell in succession to end the dig.

The bottom of the second inning was a three-up, three-down affair for the Aces, with Nick Bertucci and Bronson Neave grounding out and Marcus Graham striking out looking on a Tim Atherton pitch.

The first two batters up for Adelaide in the third inning each grounded out to Melbourne's third baseman Darryl George before Partington flew out to Willis at centrefield.

Atherton was able to get the first two Aces batters to freeze at the plate and look at strike three on both occasions, but George became a baserunner with a bounding ball up the middle and although McKinnon at second base made some ground and collected the ball well, couldn't make the play at first. George was stranded at first as Barrie struck out swinging.

Melbourne made a pitching change for its defensive inning, bringing in Jeremy Young for Kent, with the new pitcher conceding a lead-off walk to Rixon Wingrove and a single to Mitch Edwards to start off the inning. The threat wouldn't come to pass though as Lutz popped up in foul territory and McKinnon flew out to centrefield, before Weber struck out looking.

Atherton continued his dominance on the mound for Adelaide, securing Melbourne's first three batters up, each via a swinging strikeout to round out the fourth inning.

Darcy Barry hit a two-out single into left field after Wells and Max Stagg were sent back to the dugout, and made it to second on a steal, before Partington drew a walk and was awarded first base. A wild pitch from Young allowed Wells and Stagg to find themselves each in a scoring position.

Wells and Stagg did end up scoring when Wingrove connected on a pitch that went into left field for the Giants to take a 2-0 lead. The Giants had runners on first and second once again as Edwards drew a walk, and then both he and Wingrove entered scoring positions, from stealing the advancing base.

Lutz was up at the plate and delivered another two runs in, doubling Adelaide's score with a hit into right field that saw Wingrove and Edwards crossing home plate, the score then reading 4-0. McKinnon grounded out to third base to end the top half of the fifth inning.

Adelaide made a pitching change, bringing in Jayden Bastow, with a Graham groundout starting the bottom part of the fifth innings before Neave earned a walk, with Sam Skinner striking out for the second out. Neave made it to second on a pass ball however, Partington caught a Willis flyball in centrefield to end the inning.

History was made at the top of the sixth inning of this encounter, with 17-year-old Genevieve Beacom brought on to pitch for the Melbourne Aces, the development player making her debut and in doing so, becoming the first female to play with a professional men's team in Australia. Despite a shaky start by the pitcher which saw some Adelaide hitters get on base, she and the team behind her were able to get out of the inning unscathed, despite singles to Wells, Barry and Parlington.

For the Aces defensive sixth innings, George lined out to Barry at short stop for the first out, as Barrie became a baserunner, hitting a single through the infield and into left field. Bastow was able to get Perkins and Cruz to each strikeout swinging to end the inning.

The Aces made a pitching change once again ahead of the seventh inning, bringing in Angus Stahl who got Wingrove out with a swinging strikeout before Edwards earned his second walk of the game. Edwards made his way to second on a pass ball, and Lutz ended up at first on a walk but the Aces defensive efforts saw the side get out of the jam with two force outs.

The Giants made a pitching change for the bottom half of the seventh, bringing in Luke Wilkins from the bullpen who, after hitting Bertucci with a pitch, secured three strikeouts across the following three batters to end the inning.

Stahl was able to get Wells out with a swinging strikeout but from there, the next two batters up each collected a hit - Stagg with a single into left field, and Barry with a double into right field that went to the wall.

Partington made it three hits in a row for the Giants with a single into centrefield that brought in Stagg to make it 5-0 Giants lead as Barrie contributed to a double play to end the away side's offense, however, the score would tick over to 6-0 due to Barry crossing home plate before the final tag out was made.

Willis grounded out to second base to be the first out of the bottom half of the eighth, and George's deep hit was caught on the warning track in centrefield by Partington for the second out. Barrie was put out in a close play at first base from a Barry throw at short stop.

Adelaide lead-off batter Edwards hit a single into centrefield to become a baserunner, and while Lutz went down with a strikeout looking, McKinnon singled into right field to become another baserunner for the side. The bases became loaded when Weber earned a walk.

The Aces weren't able to get the double play to end the dig and although Cruz got the runner at second, Wells was safe at first, and therefore, it saw Edwards score. With runners on the corners, the home team got out of trouble when Stagg flew out to left field.

The Giants made a pitching change, bringing Tom Fitzgerald onto the mound, but it would be a tough ask for the Aces to claw back into the contest, especially after Perkins struck out looking to begin the side's defensive half of the innings. The Aces chose to bring in Kynon Molander to pinch hit, the batter struck by a Fitzgerald pitch and even though Bertucci struck out swinging, the home team started a small rally.

Graham drew a walk and Neave singled into right field which saw the Aces with the bases loaded, with Skinner then driving Molander in to plate the team's first run of the contest with Barry at short stop unable to complete the throw to first in time. However, still with the bases loaded, Willis was the final out, grounding out to McKinnon at second base to hand the Giants the 7-1 victory.

With the bats, the Aces tallied five hits, with Darryl George, Jack Barrie, Kyle Perkins, Bronson Neave and Sam Skinner each collecting singles. Kynon Molander scored the lone run of the ballgame for the Aces, courtesty of a Skinner RBI.

For Adelaide, the club was lead by Darcy Barry with the bat, going three for four at the plate with two singles and a double while Mitch Edwards, Wade McKinnon and Brock Wells each collected two hits for the game. Edwards and Max Stagg tallied two runs each while Rixon Wingrove collected three RBIs, and Donald Lutz two RBIs.

The Melbourne Aces and Adelaide Giants finish The Melbourne Challenge with Game 3 tomorrow, Sunday January 9 at Melbourne Ballpark from 1pm.