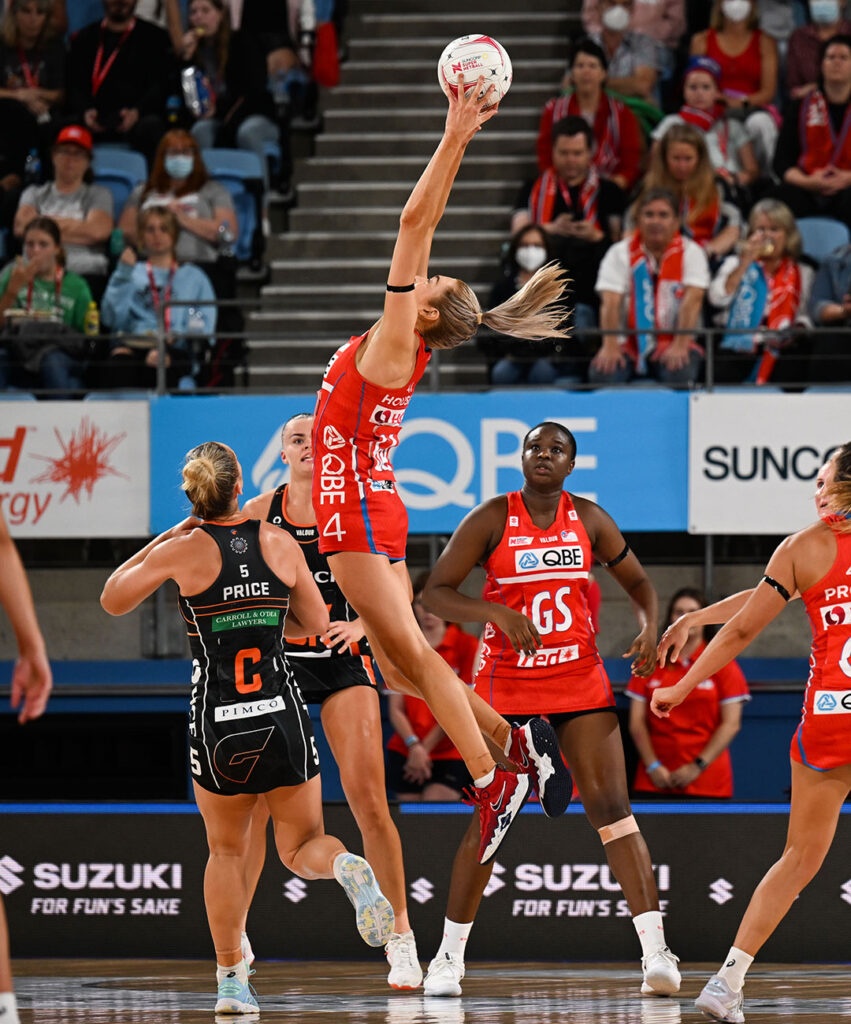 The Swifts suffered a double blow as they lost the season opener 55-57 to the Giants, and Sam Wallace suffered a serious-looking knee injury.

The Swifts suffered a double blow as they lost the season opener 55-57 to the Giants, and Sam Wallace suffered a serious-looking knee injury.

The Giants beat the NSW Swifts in a grand final rematch to start the Suncorp Super Netball season with a thrilling 57-55 win, but the story is bigger than the score for both sides.

The Giants won with Jo Harten doing to the Swifts what the Swifts have done to opponents for years, as she was the architect of a sequence of passes in the Giants' forward half that took the last two minutes off the clock.

The Swifts had fought back to the brink after their season was rocked with ten minutes to play in the fourth quarter.

Sam Wallace, the Swifts' star goal shooter, went down hard on the edge of the goal circle, with a suspected knee injury.

After the game, Paige Hadley was clearly devastated by what she had seen.

"It’s absolutely devastating, I can’t even describe it," Hadley said.

"She’s had a great preseason then she was ready to come in, so to hear her scream like that brings back thoughts of when Madz (Maddy Proud) and when I did it. So yeah, it’s absolutely devastating."

Hadley was full of praise for the Swifts defence who kept Giants stars Jo Harten and Sophie Dwyer as quiet as they could.

"I thought our defence did an absolutely brilliant job and in attack we just didn’t cherish it, I think we were playing quite long and that’s not our style of play.

"So I think, yeah, I think the first half didn’t really set us up for the second, which is disappointing, but, you know, the Giants are quite physical, so they kind of let you play how you don’t want to play.

"I think, and again that short, sharp ball movement that’s what we’re known for and also keeping possession, so for us going back to that sort of stuff, making sure that our centre passes are quite clear, our first and second phases, and obviously, praying that Sammy’s back, but if she’s not then it’s a long road ahead for us."

Wallace had been matched up on Tilly McDonell throughout the match. McDonell was a shining light for the Giants.

McDonell, stepping into the goal keeper position full time with the retirement at the end of last season of Sam Poolman, immediately made the bib her own.

McDonell had five gains, five deflections, two rebounds, and had subdued Wallace's impact on the court.

"Tilly played fantastically tonight, I think she will be excited," Fitzerald said.

"The more she gets to play, the better she'll be."

April Brandley started in goal defence, but only played half of the match.

"April was only ever allowed to play half a game and even then we weren't sure about that until halfway through the week, but we were very grateful that she could play a half."

"But then I'm really happy with Jemma, because she's worked so hard in the offseason. She really deserved the opportunity tonight."

McDonell gushed about the chance to play with Brandley.

"I love working with all the defenders, but its been unreal to work with her," McDonell said.

"You just get that vibe and the energy and we all play quite similarly, and have a fly at the ball and back each other up, so it was great to have her back in the mix."

When Brandley went off, and Giant Jemma Donoghue made her debut in the second half, McDonell took a leadership role in the defensive circle.

"I played a lot with her coming through the pathway together, so I felt comfortable with her.

"We played in preseason together, and she's a great young player and we worked really well together."

The Giants' win to start the season is the Swifts' cross to bear, as the result is compounded by Wallace's injury.

"I'm proud of them. At the end of the day, that is probably the toughest ten minutes they just played in their life, and just getting them to finish the game is probably key," Akle said.

"I just told them we don't know what the diagnosis is. Obviously, it doesn't look very good at all, but you can only stay in the moment and we'll see what happens."

"That definitely could have gone the other way, and we'd lost by 12. They got on with it, and there's nothing more you can ask your girls and to keep playing and play for each other."

Akle was confident that the Swifts will be able to enact a Plan B.

"No one is Sam. So I think you just play a different style of netball and we're capable of that with our depth that we have.

"We've got Sophie Fawns [a late elevation to the playing squad tonight] and we've got Laura Towell who played in preseason.

"That's what preseason is about - they got some good hours, so you wait and see."

The Swifts play the Melbourne Vixens next week, but will be sweating on the results of Sam Wallace's scans.

The Giants will travel to play the Adelaide Thunderbirds next week.