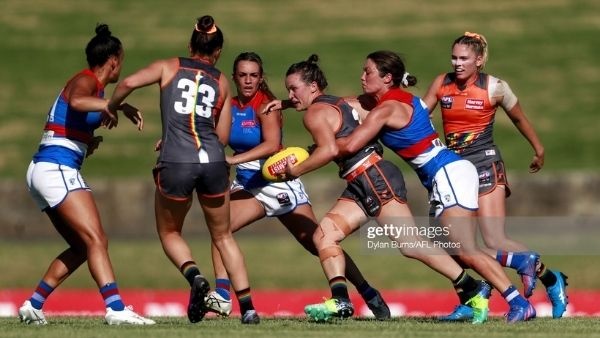 Giants raise the Barr as Nicola and Alyce Parker star

The Giants have won their second game of the AFLW season after a 21 point win over the Western Bulldogs at Henson Park.

Giants raise the Barr as Nicola and Alyce Parker star

The Giants have won their second game of the AFLW season after a 21 point win over the Western Bulldogs at Henson Park.

The GWS Giants were able to get its second win for the AFLW season after a 21 point (43-22) win over the Western Bulldogs.

It was the Bulldogs first match in just under three weeks with the Bulldogs not playing since round one against Melbourne.

The Giants drew the first blow for the match with a goal from Nicola Barr was able to kick it off the ground through for her first AFLW goal in 34 games.

The Giants piled on the pressure giving the Bulldogs little room to move which opened a scoring opportunity throughLouise Stephenson.

Isabella Grantwas piling on the pressure for the Bulldogs, receiving two holding the ball calls going her way within a couple of minutes.

Stephenson’s move up forward was working wonders for the Giants kicking a second goal in the first quarter after selling a bit of candy before snapping a goal.

Richelle Cranstonkicked the Bulldogs first goal on the quarter-time siren as well as her first in the red white and blue.

The Giants went into quarter time with an eight-point lead after coming out firing in the first quarter.

Barr kicked off proceedings in the second quarter slotting her second goal for the match.

The Giants put their foot on the gas withCora Stauntonkicking a goal extending the Giants lead.

The Giants went into the halftime break with a 21 point lead, leading the Bulldogs 31-10.

When it looked like the Bulldogs were finally going to get a goal with captainEllie Blackburnrunning into an open goal, a free-kick was awarded the Giants way which saw the ball go down the other end.

Blackburn quickly got another opportunity in front of goal and she made sure she made the most of it, steaming inside forward fifty with a minute to play in the third quarter.

The Bulldogs kept that forward pressure up, keeping the ball in their forward fifty for the last forty seconds but couldn't get another goal. Instead of kicking two behinds.

Despite not scoring in that third quarter, the Giants held the lead but the Bulldogs were able to chip away at it. Cutting the Giants lead to 11 points. (31-20)

Annalyse Listerwas taken from the ground with a lot of blood streaming from her eye after a collision. Although she came back on the ground after getting her head tapped.

Barr kicked her third for the match after a free kick in front of the goal making it hard for the Bulldogs with ten minutes left.

Jessica Doyleput the final nail in the coffin, kicking her first goal in AFLW extending the lead to 21 points with five minutes to play in the final quarter.

Barr was among the best for the Giants, having a career-high three goals andAlyce Parkerwas also up there with a game-high 20 disposals.

WhileEleanor Brownwas among the best for the Bulldogs having 19 disposals playing an important role off half-back.

The Bulldogs will have a quick turnaround playing Fremantle on Tuesday at Whitten Oval while the Giants will play St Kilda next Saturday afternoon at Henson Park.