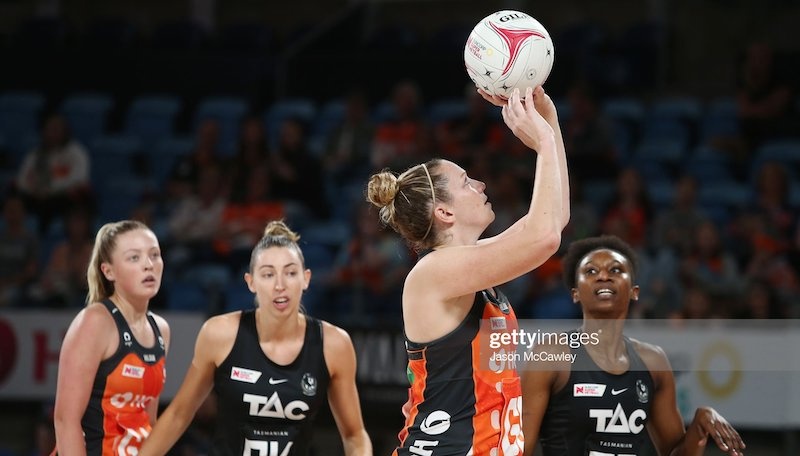 Giants jump off bottom with win over Magpies

The Giants have made a big statement to end a huge week, finding another level to jump the Collingwood Magpies on the Super Netball standings, 76-61.

Giants jump off bottom with win over Magpies

The Giants have made a big statement to end a huge week, finding another level to jump the Collingwood Magpies on the Super Netball standings, 76-61.

The Giants have made a big statement to end a mammoth effort of three games in eight days, finding another level to jump the Collingwood Magpies on the Super Netball standings, 76-61.

COVID-19 drama hit the Magpies before the clash in Sydney. Sophie Garbin and Gabby Sinclair had already been ruled out before the mid-week games due to protocols, and on Saturday Geva Mentor and Molly Jovic joined the others under the health and safety protocols.

The outs certainly helped the Giants, who are only just recovering from a wave of COVID-19 through their own camp. Returning from the protocols, their players have struggled to run out halves and games of high intensity netball.

It was, however, no longer an issue for the Giants on Saturday night, as they appeared to be fully recovered and ready to fire, resulting in smiles all-round.

Player of the Match Sophie Dwyer said it was "very good to get a win."

"We've been building the last couple weeks, so it's finally nice it all came together."

Her teammate, Giants wing defence, Amy Parmenter said the team was "very fired up today" after Tuesday's disappointing loss to the Queensland Firebirds.

"I don't think any of us are very good losers, so definitely wanted that win. Feel like we can go into Easter Sunday now and chill out, and be happy," Parmenter said.

"I think we definitely had some more motivation to do our homework, and obviously we've just been through what they've been through COVID-wise, so we didn't want to miss that opportunity to really get on top of them."

Collingwood Magpies coach Nicole Richardson was proud of her squad, who "fought gallantly" despite the challenging circumstances of three games in a week, with a side of COVID-19 added into the mix on Tuesday.

"I'm super proud of the girls, to be honest with you. We've had one crazy week as you can imagine, and I thought that the group that we were able to put out there tonight, worked their butts off, to be honest," Richardson said to media post-match.

"So, the scoreline at the end was disappointing, it probably blew out a little bit. But you know, we were in a position where we needed to take a couple of two point shots, which didn't fall our way, so I was disappointed that it blew out to the score line that it did.

"But as I said, you know, with the outs that we've got in this group, I thought we were pretty competitive tonight against a team that were pretty much on fire compared to what they were last week."

The momentum was swinging quickly in the opening quarter at Ken Rosewall Arena, with the Magpies taking an early three goal lead, before the Giants hit back with a run of their own.

A flurry of goals and two point shots in the final five minutes saw an 8-2 period that put the Giants ahead by eight at the first break.

Collingwood responded in the second quarter, an impressive shooting quarter from Shimona Nelson, supported by a more confident Nyah Allen, put 18 goals on the board.

And the team was in the heads of the Giants, who were fading out a little, as they have in the past two games, tiring towards the half-time break.

After the margin got out to as much as 10, but the Magpies were unable to capitalise on a run of five that brought them back in it. The deficit remaining at six at the main break.

In the third, the Giants were comfortably back on top, Richardson forced into playing around with players and their positions, to try some different combinations with the options available to her.

The Giants extended the lead late in the game, capitalising on the missed super shot attempts by Nyah Allen. The young shooter hit two, before a four goal run finished off a 15 goal win for the Giants.

While Dwyer was named player of the match, her English Rose shooting partner Jo Harten seemed to be back in form, confident and finished at 100 per cent for both one-point and two-point shots.

Speaking to media after the game, Dwyer said the group being back together this week, instead of separated by COVID-19 had made a massive difference to their cohesion.

"Obviously, we were a bit disrupted the past couple weeks with people coming in and out of COVID, so it was nice, I guess, just to have a week of everyone together and a few games under our belts back as a group. So yeah, [Harten] probably did have a bit more confidence with not only her game, but everyone around her."

They were also a lot happier bunch, celebrating goals with high-fives, even coach Julie Fitzgerald was smiling throughout the game.

"We had a chat after our Firebirds loss just about celebrating the small wins," Dwyer said.

"I feel like we have such a high expectation of ourselves that we can play some really great netball, so I think we don't really celebrate that because we just expect it of ourselves. So yeah it was definitely a focus that we wanted to give some more high-fives, some more smiles, just have some fun out there, because that's, at the end of the day, when we play our best netball."

The players also created the unit defence across the court, five of the seven took intercepts, and it contributed to a strong team win. Speaking about that "unit" approach post-game, Parmenter said it was the key to breaking down the Magpies.

"I think it was a real unit thing. We knew, playing the Magpies, like if you just go one-on-one and work by yourself, they'll just out-run you. So, I think it was good that we worked together, kept them really high and that was like a full team effort. I gotta get my running shoes on when I play Kelsey (Browne), I'm like ready to run."

After three games in eight days, and with both teams feeling the effects of COVID-19 - although currently at different points in their waves - the Giants and Magpies, and all Super Netball teams, could be forgiven for a few fatigue-related mistakes.

However, Richardson said her side isn't actually feeling too bad right now, although they are looking forward to having more time to "review, preview and then find a team to put out on court".

"They're actually not too bad, the group, so we'll see how they pull up over the next couple of days.

"We've probably got more concerns about the group that are going to come out of iso. Giants have found it hard the past couple of weeks, and I'm not really looking forward to that for our group.

" So you know, we'll just have to take it each day as it comes in, manage load across the week and just see what presents next Sunday for us."

The Giants will host the Fever next Sunday, while the Magpies will travel up to Brisbane for a clash with the Firebirds.