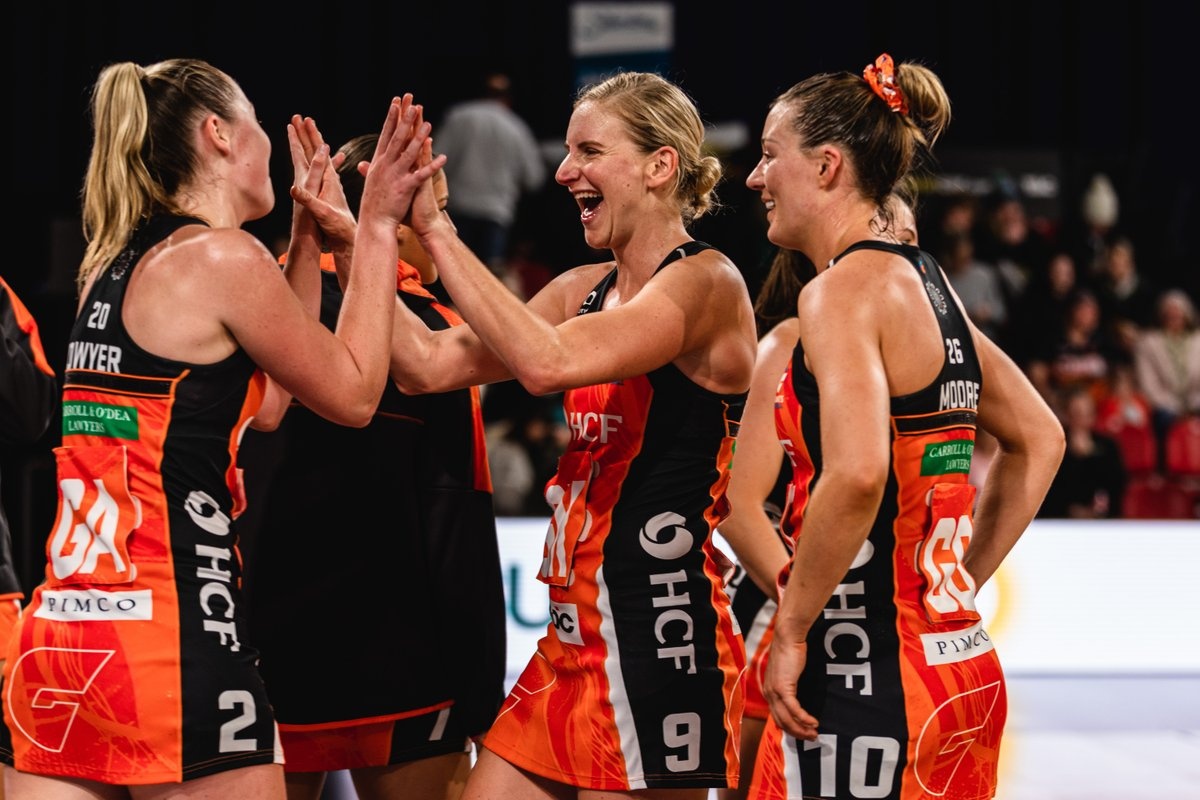 Giants Join Top Four After Sending Magpies Down In Launceston

The Collingwood Magpies lose their Tasmanian winning streak after a Giant third quarter, ending the game 69-60.

Giants Join Top Four After Sending Magpies Down In Launceston

The Collingwood Magpies lose their Tasmanian winning streak after a Giant third quarter, ending the game 69-60.

The match-up between the Collingwood Magpies and Giants was certainly a game of two halves. Up by six at halftime, the Magpies went crashing down following a 24-10 quarter to the Giants.

After their closely fought match against the Melbourne Vixens, the Giants headed down to Launceston to face the Magpies. The pair last played each other in Round Five, where the Giants had a comfortable 15 point lead.

Statistics-wise, the teams were close, both with four wins and five losses to their name this season. Additionally, they were similarly ranked for shooting accuracy, intercepts and turnovers. Their primary difference was penalties, as the Magpies had 585, whereas the Giants only had 495.

The Giants kicked the game off, with Harten appearing fit and healthy after leaving court due to illness over the weekend. Early on, the Magpies were able to get ahead early, thanks to a rebound from Geva Mentor. Tilly McDonell returned the game to point-for-point, before a missed goal had the Magpies ahead once again.

Throughout the first quarter, there were several fumbles from both sides, possibly due to fatigue from the weekend’s games. Early in, Jacqui Newton replaced Jodi-Ann Ward in at goal defence, a switch that would remain throughout the game.

Come Power Five, the score was 11-7 to the Magpies, following an intercept and leading in their centre pass. It was here where the Giants held a tactical time-out, with no discussion of the super shot. It was when the score hit 14-8 that Harten went for her first of the evening, closing it to a four-point lead.

On the next centre pass, Sophie Dwyer continued the super shot streak. Over the season, the team was making 51 per cent of their super shot attempts, whereas the Magpies were ranked the lowest in the competition at 46 per cent. Harten closed with another two-point shot, ending the quarter 17-15 in the way of the Magpies.

Seven minutes into the second quarter and the Magpies called their first tactical time-out. The Giants took their chance to have a change in defence, putting Lauren Moore in at goal defence, taking April Brandley out. When the lead blew out to eight, the Giant called their own time-out to regroup.

With three minutes left to go, it was now 34-23 and it was Harten’s time to take the super shot risk. If the game continued to go the way it was, the super shot may just be the Giants saving grace. With four consecutive super shots, Harten managed to bring the difference to six points, 37-31.

Coach Nicole Richardson reflected on the second quarter in her post-match press conference.

"I think the back end of the second quarter hurt us, even though we went in six goals up at half-time, we probably should've been 12 or 13 goals up, if we didn't have the two-point shot in play.

"But to be honest with you, we knew that coming into the match, Giants are so potent in that part of the game. Unfortunately, they were on fire with that tonight."

Opposition coach Julie Fitzgerald also commented on the first half after the game, noting there were positive passages of play, but often to no reward.

"In the first half we had a couple of good passages of play, but then we'd win ball back and give it straight back to them again. We just made too many errors, we just weren't striving hard enough to the ball.

"We really addressed that at half time, had a good chat amongst ourselves and came out firing, thank heavens, in the second half."

For the third quarter, McDonell was replaced by Brandley at goal keeper. The Giants closed the gap to one point in the following five minutes with a five-goal run. Soon, the Giants were ahead coming into the Power Five.

The Magpies' resident super shot scorer Gabby Sinclair was on court, giving them an opportunity to stop the Giants from creeping away.

But creep away they did, scoring 24 points to the Magpies' 10. Only six of the points came via super shot, thanks to Harten, though this still put them up 55-47. Now it was the Magpies' turn to dig deep to keep their Tasmanian winning streak up.

It was nine points that the Magpies ended up losing by, something Richardson acknowledged post-match.

"I think the downfall for us tonight was the two-point shot if I'm brutally honest. Statistically, when you look at the stats across both teams - centre pass conversions, game possession, lost possession - the stats are really very even. They had nine more two-point shots than us, and we lost by nine goals."

After quarter-time, the Magpies put their heads down and started working on getting back into the game. Although Nelson had a four-goal run, the Giants seemed to have no issues getting the ball from centre to goal.

THUNDERBIRDS TAKE FLIGHT IN BATTLE WITH FIREBIRDS, WHO DROP A THIRD ON THE TROT

Now 63-59, there was four minutes to go. Even if the Magpies were to start taking the super shot, the Giants would have no problem returning the favour. The Magpies called a timeout, with Richardson saying, “everything [had] to be a two-point shot.”

In the final minute, the players appeared to know that there was no way they could get the win. The four points for a win puts the Giants at third on the ladder, thanks to their percentage. It also marks the 11th consecutive win the team has had against the Magpies.

Jo Harten was named player of the match, making 10 of her 11 attempted super shots and a 91.1 per cent goal success rate. Harten reflected on the game post-match, saying, "I guess it was a game of two halves, Collingwood were pretty hungry in that first and second quarter and they were capitalising on our errors.

"I feel like in that in that third [quarter] we knew what job we had to do, we had to cut out a few of our errors, closed down their space a little bit and then actually delivered up out of our attacking end and that's what catapulted us to the win, I guess."

One positive the Magpies had from the game was their ability to hold onto the ball.

"We also won plenty of ball in the first half, I think where we got hurt in the second half was we weren't able to win ball and give the supply to our attack end."

The Magpies will return to Melbourne to play the Adelaide Thunderbirds, whilst the Giants travel to West Coast to face the Fever.