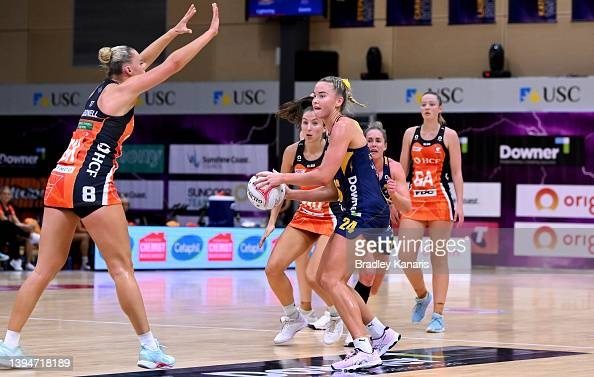 Early in the pre-season, the teams met once with the tough match-up going in the Lightning’s favour. Historically, the Lightning have beaten the Giants over the years, although this year the teams appear to be evenly matched.

Hours before the game, it was announced that star shooter Cara Koenen was out due to COVID-19 health and safety protocols. Annika Lee-Jones was named as the replacement player, a training partner who has played at both ends of the court. Lee-Jones has typically taken the goal keeper position on the court for the Lightning, making this replacement especially interesting.

Leading into the mid-season clash, both teams were sitting in the middle of the pack and were both coming off two consecutive wins. Last week, the Giants battled against the Fever, beating them by one point. After that game, the Giants would understand the power of the crowd, playing with supportive voices at their home venue. With the Lightning celebrating Member’s Round, the home crowd may have been what they needed today.

The Lightning started off quickly putting points on the scoreboard via youngster Reilley Batcheldor. At the other end of the court, Jo Harten had her game face on and matched Batcheldor’s shots. A missed long shot from Steph Wood lead to the first turnover, allowing the Giants to get one up on the Lightning.

Their lead didn’t last long, though, with Tara Hinchliffe denying Harten her fifth goal. It was the Lightning defence who were the first to start reaping the benefits of their pressure, continually slowing down the ball in the Giants' attacking end.

Unfortunately, several of their turnovers were not converted, keeping their lead at one for the first half of the quarter. Their work soon paid off, though, putting the Lightning three points ahead just before the Power Five.

After a time out, the Giants’ came out with a bang, thanks to their defence. Harten and Dwyer took these opportunities to showcase their long-range shooting, sinking three consecutive super shots. In these final five minutes, the Giants were steaming ahead, up by six to end the quarter.

The second quarter started off fairly evenly once again, until Wood was called for footwork. Frequent penalties were called on the Lightning, further allowing the Giants to stay in possession. Now nine behind, a change was needed in the Lightning camp, with a tactical time out called.

The Giants still remained unfazed, continuing to sink the shots. Thanks to some more intercept and turnovers, they now had a 12 point lead. At this point, Kadie-Ann Dehaney replaced Hinchliffe at goal keeper in an attempt to get more ball back. Her long arms were enough to shake Harten’s super shot attempt, converted for a vital two points by Batcheldor.

During this time, Kate Walsh was replaced by Tara Hinchliffe in goal defence, after a penalty-heavy second quarter. Dwyer and Harten were still standing strong, quickly scoring once ball was in hand. The pair ended the quarter with 18 points, putting them 13 ahead at half time.

Post-match, Coach Kylee Byrne addressed her team's penalisation, saying "we probably didn't expect the umpiring calls to be so one-sided, as they were.

"I think that really meant we had to try and do something different, which when you start a game and you're trying to do a completely different defensive style that you haven't really trained for, or you're not known for, it does impact what you're doing out there.

"At the end, it just gave them too much space, they were just able to have uncontested balls."

For the third quarter, Lee-Jones came on as a goal shooter, putting the first points on the board for the Lightning. Her presence changed up the attacking from its moving circle, offering a new challenge for the Giants' defence. Another positional change for the Lightning was the addition of former Giants training partner Annie Miller at wing attack.

Batcheldor was back on, another chance for super shots to come in to decrease the margin. Thankfully, she was on her A-game, although the ball needed to get to her first, something that was easier said than done. Nothing could stop the Giants, putting 26 points on the board in the quarter, ending it 63-39.

QUEENSLAND FIREBIRDS BOUNCE BACK WITH WIN OVER NSW SWIFTS

VIXENS SENSORY ROOM TO BE RENAMED AFTER INGLES FAMILY

With their score increasing, it was possible that the Giants would be elevated two spots on the ladder, putting them in third place.

Post-match, April Brandley discussed the importance of percentages, saying to the broadcast "the ladder's super tight, so every little thing you can do to get the percentages up is really important to us."

Even with the Lightning leading the fourth quarter in the first five minutes, the Giants were getting a decent conversion on goals. Soon, it was an even quarter, but the Lightning players were hitting the deck left, right and centre. During the final quarter, both Kate Walsh and Mahalia Cassidy had to leave the court due to injury.

Come the final five, and the Lightning were lifting spirits with super shots, even if they were futile. Although it was their highest-scoring quarter, the Giants still came out on top. With a 19-16 quarter, the Giants ended with a 28 point win, putting them fourth on the ladder.

"It was a really good game, I think the girls around me made me look good, to be honest."

Post-match, Lightning coach, Byrne alluded to external influences that may have affected the Lightning's gameplay, saying "it's been a pretty tough week off-court, there's been a fair few things happening that has caused our attention to be diverted elsewhere.

"The girls got in this week, they were amazing, put their heads down and trained, and we thought we were going to pull it together today, it just didn't come off for us."

Earlier in the week, Lightning and Netball Australiaissued a joint statementregarding the online bullying defender Walsh was experiencing. The targeted hate was centred around her gameplay against the Swifts last week, where she and the Swifts' goal circle put it all on the line.

The Lightning will host the Thunderbirds next Saturday, while the Giants return home to try and continue their winning ways in a derby with the Swifts.