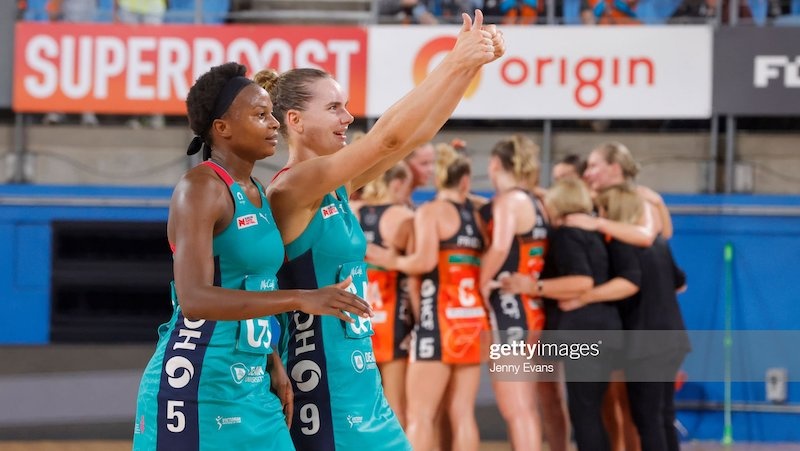 Without Jo Harten in the second half due to illness, it was up to Matisse Letherbarrow to fill her Roses-sized shoes and from her first shot on goal, there were positive signs.

Letherbarrow finished the night nine from 11 for super shots, and 13 from 14 for one-pointers, flexing her long-range shooting muscles and highlighting the very specific role she could play for the Giants as their season rolls on.

Talking to the media after the three point loss, Letherbarrow said, "it's heartbreaking, but I think you just have to take the positives out of that.

"Like, I feel like that, the whole 60 minute performance, we just absolutely took it to them, and we showed that we're real contenders, and we also showed the type of netball that we can play and how capable we are.

"So, I think it's just going to be important to take that intensity, and what we put out there, into the next two games because they're obviously two quality sides and obviously getting those wins will be important to have a good back end of the season."

Vixens' coach Simone McKinnis spoke to the media after the match, commenting how the experience of an extra time win will be "super valuable" come finals.

"To come through that situation, and one of the things that impressed me, in that five minutes extra time, was that I thought that we were quite composed, and we were, you know, [we] kept it simple, driving and playing our game well, so I thought that was really pleasing to see.

"And that sort of experience, and that experience together as a team, coming through that, that's important for them."

Bodies were being thrown from the early moments of the game, as Giants' wing attack Maddie Hay left the court to have her bleeding knees tended to following a diving effort on a deflection that saw her hit the deck. Amy Sligar came on for the few minutes while Hay was patched up.

The Vixens, in their box defence, picked up early intercepts, that saw the travelling team hit the lead at the first break, 13-10.

A short patch of better play from the Giants pulled the margin back in, however, it was then the Giants' game plan and starting seven took a hit.

Giants' captain Harten signalled for a time out, though not before the Vixens had called their own. At the time out, Harten left the court after words with Fitzgerald, with the physio and then the doctor following her to the rooms.

When asked about Harten's condition post-match, Letherbarrow said, "there's just been a little bit of sickness going through the team.

"Obviously with the season changing and everyone's getting colds and stuff, so she's just been a bit unwell, but I'm sure she'll be back in her amazing self next week."

Letherbarrow was given the goal shooter bib and she started off strong with a two-point shot.

Lauren Moore came on at goal keeper in the second, with Fitzgerald looking to challenge the unwavering pillar in Kumwenda and her now potent combination with Austin.

In the third quarter, as the Giants were still finding their groove and feed into Letherbarrow and Dwyer, the margin reached as many as 11 points. However, come the Power 5 period, it was time for the Giants' shooters to show their range.

Five super shots in the third quarter alone - four of those from Letherbarrow - got the Giants back in it.

While the shooting was taking centre stage, the workrate of Liz Watson in the midcourt for the Vixens was unmatched. While Amy Parmenter had two deflections and two intercepts for the game, her opponent Watson picked up 36 centre pass receives, made 46 feeds - of which 30 were converted - and 121 Nissan Net Points.

The centre battle between Jamie-Lee Price and Kate Moloney was also high quality and ferocious.

With just five minutes left in the game, Price came up with yet another deflection and followed it up for the intercept gain to McDonnell. The Giants transitioned the ball down the court slow at first, and then found Letherbarrow in a matter of passes, with Dywer and Letherbarrow finding space off their defenders.

The Vixens called a time out, but it was to no avail as the Giants continued their press and found the lead with another Letherbarrow super shot.

That one point lead became three, as Letherbarrow nailed her eighth super shot, but the Vixens responded with Austin sinking her own.

With little time on the clock, the Giants played a possession game, but were unable to add to the scoreboard, giving the Vixens time to level it, which they did.

An intense final minute of play saw Austin miss an attempt to win with a two, and then the Giants threw it away down their end. With the sides unable to be split, it was taken to five minutes extra time.

In extra time, it was the Vixens who had a touch more composure to maintain possession and score through the one-pointers, while the Giants went for twos.

Letherbarrow was able to sink her ninth super shot, but her tenth was unfortunately off-line and that gave the Vixens opportunity to take the lead. With a goal advantage, the Vixens converted their centre pass and another turnover for the win, 66-63.

The calmer side in the final five minutes was the winner, and it was something the Vixens have specifically practised at training in the past six months, because "it is different", says McKinnis.

"We have practised the five, the extra time because it is different.

"So everyone's got to be familiar about what extra time looks like, cause otherwise you're at the end of the game dealing with what's happening."

While the defensive combination of Jo Weston and Emily Mannix was challenged by the super shot shooting of the Giants' goalers, their partnership is something McKinnis spoke about post-match and how they are always looking to improve, despite their long-term relationship.

"They've got a combination that's been together for a long time and they're always working hard to improve and get better and how they can do things differently, and it was a tough one for them tonight - they did some great defence across the game, but it was a tough one in terms of that two-point time."

Letherbarrow was still on an energy high when she spoke to the media after the game, obviously a little heart-broken by the result, but having nailed her role as a substitute for Harten, Letherbarrow should see more court-time as the season continues.

She is a specialist long-range shooter, has been since she was young, and with the Power 5 at the end of each quarter, her accuracy could be valuable, even for a team like the Giants who already feature two more than capable shooters.

"I think, like, my whole life, since I was little, I always kind of pushed the boundaries a bit, and I was always a bit of, like, a long range shooter, [it] was my speciality," Letherbarrow said.

"So I think, obviously since the two-points come in, that's what we practice at training, and it's a real focus of ours.

In those final minutes, Letherbarrow was looking to her bench, who had directed her since she stepped onto court in the second quarter, to decide if she should play it safe with ones or go for the twos.

"I think, looking on the bench as well, they were all - it was either one or two point - and obviously the two point is what gets us ahead, and I'd obviously been shooting them in the two quarters before, so I had the confidence going to post.

"And obviously having someone like Soph out in front of me, who is absolutely incredible, so I had that confidence just knowing she would back me up."

Both of these teams now face travel before their midweek matches. Though, for the Vixens, that is a trip to Perth. McKinnis said the team would remain in Sydney to do their recovery, before travelling cross-country more relaxed.

"The focus tomorrow is just, really, that recovery... we'll spend the day here in Sydney and overnight again, so we get on the flight... and we're in good condition."

The Melbourne Vixens now travel to Perth where they'll face the West Coast Fever on Tuesday evening, while the Giants will take on the Collingwood Magpies in Tasmania on Wednesday.