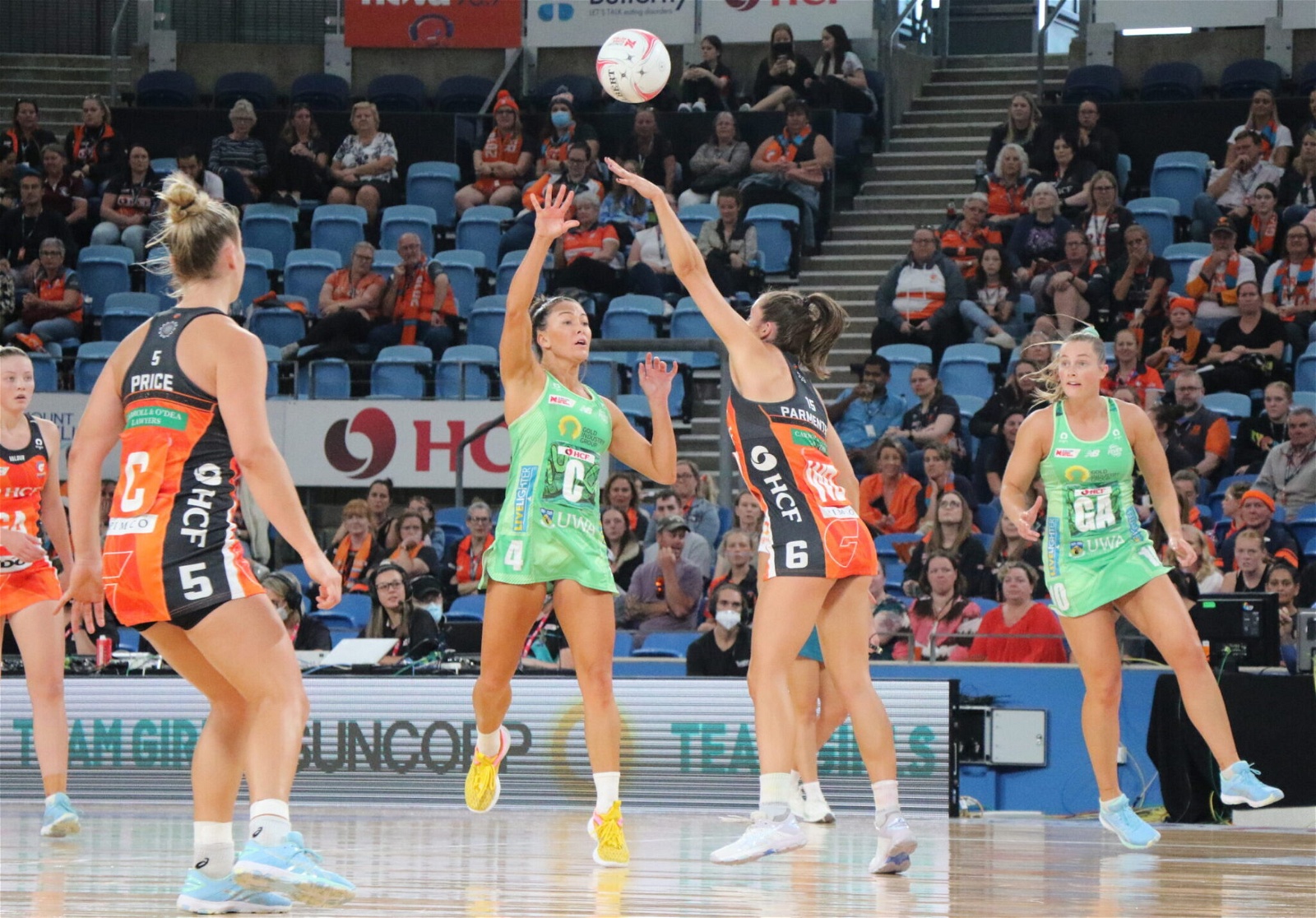 Giants brush off a Fever to keep the rivalry alive

The Giants continued their rivalry against the Fever, holding off the fast-finishing West Coast to record a one goal win.

Giants brush off a Fever to keep the rivalry alive

The Giants continued their rivalry against the Fever, holding off the fast-finishing West Coast to record a one goal win.

The Giants have held off a fast-finishing West Coast Fever to win a thriller by one goal, 74-73. It's a repeat result of last year's preliminary final, where the Giants eliminated the Fever to book their place in the Grand Final.

This year, the result keeps the Giants well-placed for a run at the finals, as the team starts to gel, as the stars recover from COVID-19. The West Coast Fever were struck with COVID-19 in the final hours before the game, as both Jess Anstiss and Sasha Glasgow were late withdrawals.

The Giants jumped out to a quick start, as Amy Parmenter and Tilly McDonell proved to be menaces for the Giants in the defensive end.

Jo Harten was up and about early, as Courtney Bruce played to disrupt the Giants, rather than on the body of Harten. It proved to be a challenge for the Fever all day, as Harten ran riot in a match-winning performance.

Harten finished with 33 goals, and two intercepts to her name, while her opposite number, Courtney Bruce failed to record an intercept.

Alongside Harten in the circle was Sophie Dwyer, who tallied 35 goals from 38 attempts, including five of six Super Shots.

After the game, Giants coach Julie Fitzgerald was full of praise for Dwyer.

"Sophie is growing in confidence wth every game, and she’s really taking the defence on, and its probably showing - she’s always had that ability but sometimes she’s doubted herself. Now I think she’s really pushing through," Fitzgerald explained.

Fitzgerald also had high compliments for Maddie Hay, who had a day out, with 30 feeds, 17 goal assists and an intercept.

"I think its the best game Maddie’s had this year. She was available for us most of the time, she was steady in the disposal of the ball, she was there in defence to help us build pressure. I think it was her best game."

Hay's midcourt partner, Jamie-Lee Price explained after the game that there had been a conscious effort to help each other out with spacing and making their way to the circle edge.

"For us, at times we get bunched a lot, so for us this week it was just working together, getting the depth, and having more than two options to the ball," Price explained.

"We worked really hard to do that, and hit circle edge, and once we got to circle dude, we could feed it really easily.

"Doing the hard work, and what Julie always says, ‘prelims really work’ - I hate to admit that."

Price also acknowledged that there had been a conscious effort to keep Courtney Bruce quiet.

"Courtney is such a strong player, and such a key player for the Fever and she’s a confidence player, so the more ball you give her, the more she will have a fly at the ball, and the more the Fever will get the ball.

"As much as we can keep her away from the ball and isolate her from getting those flashy intercepts, the more that we can score those goals. So its key for us to play it short and keep her out of that game."

The Giants didn't have it all their own way, as the Fever launched a comeback in the third quarter, winning the term by eight goals and actually hitting the front at the final change.

In the words of Price, it was a stern challenge, but the Giants held their nerve.

"In that fourth quarter it was ‘we want this, we’ve worked hard for this, so lets bring back the energy and do all the hard work’ and I think that really showed.

"We really tightened up in the defence as well, which you need to do against a team like this when they have a tall shooter at the back, because they can score so quickly like we saw."

The Giants managed two bursts of three consecutive goals in the fourth quarter, one, just four minutes in, swung the lead to the Giants, and the final burst, in the final five minutes, put the game just out of reach for the Fever.

Sophie Dwyer leaps for the ball late in the match as the Giants held off the Fever. Image: Emma Dayan

Most impressive though was the slow pace of play. The Giants were patient, stringing plenty of passes together and not letting the Fever's swarming defence stymie them.

For Fitzgerald, the calm fourth quarter was invaluable for her team, with so many young players.

"I think its just showing a level of maturity that we know we can do it, and just maintaining our composure in those pressure moments.

"I think its a big win for us, not only in points, but what we will have learned from tonight."

For the Fever, its not all bad news, as Dan Ryan explained after the match.

"I’m really proud of the fight, particularly in that second half, but certainly not at our best in the first 30 minutes and in the end it cost us," Ryan said after the game.

"Giants are a hard one in terms of how smart they can be with the ball and keeping it low and fast and flat, and getting our heads turning a little bit.

"I thought there were times where our defensive pressure as a unit was a bit off the pace, and we were releasing pressure by not attacking or staying on what we needed to. So there were a few little gaps in there at times, but when we’re all in sync, and doing our jobs, I thought we were really effective.

"You need to maintain that for the full match against the Giants or they do hurt you, which they did to us at times throughout the game."

Jamie-Lee Price leaps for the ball as she played a key role for the Giants against the Fever. Image: Emma Dayan

For Ryan, the adjustments with Glasgow and Anstiss meant that the team was challenged, but he believed they had managed it.

"We got the news yesterday, just before flying out, so it was a bit of a mad scramble to ensure that we had Plan B, C, D ready to go. Fortunately we were prepared for any of those scenarios to take place.

"Obviously it might have been a last minute change but such is life in COVID at the moment in the season. I’m really proud of the group that they’ve handled that, and particularly their ability to fight through the match and put ourselves in a really strong position late in the game."

One player who was added in was Zoe Cransberg, who made her Super Netball debut for the Fever today.

"I’m really pleased for her, and so proud that she could get out on a Suncorp court and make her debut. She’s a really talented player and we really like having her in our environment.

"We had no hesitation putting her out there against one of the best midcourters in the game. She learned a lot from the experience - it was a bit of a whirlwind for her, but she’s grateful for the opportunity and hungry for the next one."

As the Fever made their move in the third quarter, Ryan could identify what had changed for the Fever.

"I thought we were sighting and sending the ball into Jhaniele with far more conviction in that third quarter in particular. We were a little bit hesitant with that feed early, and really not using our weapons as we needed to.

"I thought our defensive pressure really intensified in that second half to give us a chance to get right back in the match. While it was a really impressive third quarter, we probably struggled at key moments in the fourth quarter to really own the match, but plenty of key learnings and takeouts for us next time."

In the end, the third quarter was the only term the Fever one, as the Giants fought back to wrest the momentum, and the result in the fourth term.

The West Coast Fever will travel again to the Adelaide Thunderbirds next week, while the Giants will travel to the Sunshine Coast to play the Lightning next week.