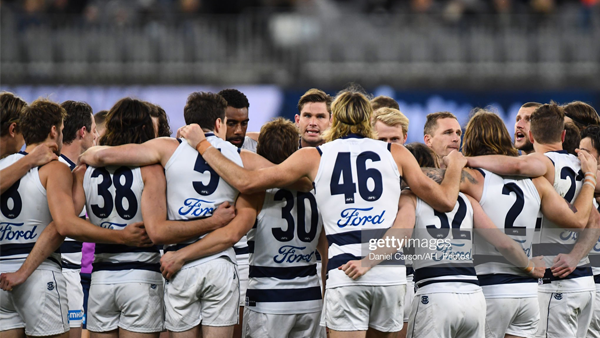 After another finals campaign without a premiership, the Geelong Cats have again turned to experience over youth, hoping 2022 is the year it'll pay off.

After another finals campaign without a premiership, the Geelong Cats have again turned to experience over youth, hoping 2022 is the year it'll pay off.

With another finals campaign finishing without a premiership, Geelong's methods of going for experience over youth have become apparent once again, however, just how long can this focus be sustained for?

In 2021, Geelong made its sixth consecutive finals series (and 16th of the last 18 seasons), however couldn't replicate its 2020 form and make the Grand Final yet again, instead succumbing to a large 83-point loss to eventual premiers, Melbourne, in the preliminary final.

During the off-season, Geelong saw many players leave, including experienced duo Lachie Henderson (206 games) and Josh Jenkins (149 games), as well as some young players who had the potential to develop at Kardinia Park. The club did go to the draft with five picks - the most since their 2018 haul of six picks - and targeted Geelong Falcons players, as well as a need for midfielders.

In the pre-season, Geelong began with a scratch match against Richmond over six periods of play, before the club's official pre-season hitout against Gold Coast, losing by 23 points after surrendering a halftime lead. Jeremy Cameron kicked three goals for the Cats while Cam Guthrie lead the way around the ground, gathering an equal game-high 32 disposals.

Geelong, although a team that has finished high up on the ladder for the best part of the last 15 years, it's the team's recent form under coach Chris Scott that's drawn the ire of the football world, and most importantly, fans of the club. With Scott's coaching methods and tactics called into question many times from gameplans and game style, the Cats need to show they can match it with the best, in September.

While the ball movement from the Cats works to get themselves forward, it's often stagnant and a stop-start nature of keeping possession, and the narrow dimensions at GMHBA Stadium favour this, and the team's ability to squeeze their opponents and counter if a turnover happens. The Geelong side is ageing quickly, and perhaps a shake-up to include some fresher legs and constant pressure will help stay with the remainder of the top eight.

It's all well and good for Geelong to continue to find wins at home, but come finals - and the AFL's stance of not allowing the club to host finals at GMHBA Stadium - Geelong needs to have a Plan B and beyond if it's to contend to the standard the club sets out, and hopes of achieving success, and the ultimate glory.

In Geelong's first game of the 2021 season, it didn't exactly go to plan, losing to the previous year's wooden spooners, Adelaide by 12 points, and despite gaining two wins against Brisbane (one point) and Hawthorn (five points) across the fortnight following, all that luck of narrow victories ran out in Round Four, losing to Melbourne by 25 points to finish the first month of the season.

It was still a mixed bag of results for the Cats in the month that followed - which included a two-point loss to 2020 bottom-four team Sydney. However, the Cats came out of the blocks throughout the middle parts of the season, winning 11 of the next 12 from that point and entering into the top two. Heading into the final few weeks, the Cats lost two of their last three games heading into finals.

Geelong met Port Adelaide in the qualifying final, however lost their ninth game in the first week of finals out of the last 11 instances, going down by 43 points. Geelong then beat Greater Western Sydney by 35 points in the semi-final before the club's season ended with an 83-point loss in the preliminary final over eventual premiers, Melbourne.

Geelong's biggest strength is its midfield, with the likes of Joel Selwood, Patrick Dangerfield, Cam Guthrie, Mitch Duncan and Isaac Smith all experienced players, and with that stable base of midfielders, it's easy for the team to get first use of the ball, and get it forward.

The Cats were the team with the second-highest clearance count of the 2021 season, averaging 33.7 per game, also being the second-ranked side in centre clearances (10.8) and stoppage clearances (22.9), signifying a real intent for the football, and movement quickly and seamlessly out of congestion.

Geelong will welcome back Jeremy Cameron to full health after three soft-tissue setbacks prevented him from going through a full pre-season, and in turn, missing the first five rounds of the season and a further five rounds towards the back-end of the year, prior to finals. The former Giant still kicked 39 goals last year, including a haul of five against the Power in Round 15, and six against the Tigers in Round Eight.

All too often, Geelong's game plan revolves around chipping the football around, maintaining possession and working its way up the ground that way, never really a team who takes the game on with the frenetic pace that recent premiership-winning sides such as Richmond and Melbourne have. With Geelong's recent record in finals, and with the aforementioned teams changing the landscape of the game with high pressure and intensity, Geelong needs to adapt.

So often too, Geelong has relied heavily on its experienced stars, however, with that being the focus in recent years, including recent off-season pick-ups Jonathon Ceglar, Jeremy Cameron, Shaun Higgins, Isaac Smith, Josh Jenkins, and Jack Steven.

These moves have stunted some of the growth and ability of the next generation of Cats, in place of experience and hoping to stay in a possible premiership window.

The focus on the now instead of looking to the future is noticeable in Charlie Constable, Jordan Clark, and Darcy Fort's departures, the club allowing them to leave after just three seasons, and the likes of Oscar Brownless never making his debut since being picked up in 2018.

However, with a strong draft hand, Geelong seems to have made the most of it, with the hope of local players such as Toby Conway and Mitch Knevitt making their mark within the club and getting opportunities early on.

After appearing in eight games throughout the middle part of the year for the Cats in his debut 2020 season, Brad Close took an extra step into becoming a best-22 player for the club last year, playing 22 games from Round Four onwards, with a foot injury the only thing plaguing him from a Round One selection.

Close took his increased opportunity in the Geelong forward line, getting on the scoreboard in all bar three games, kicking 15 goals across the season as a handy medium-sized forward. Flying under the radar at times with others focusing on similar players such as Luke Dahlhaus, Shaun Higgins, Gary Rohan and Gryan Miers, allowed Close to go about his game unguarded and blend in, but still get results.

Entering his third year at Kardinia Park, Close does the fundamentals of the game right, using clean hands in the contest, upholding acts of pressure onto his opponents, his team-orientated attitude, his effort, impact and work rate is a considerable factor in Close having another career-best season in 2021.

Geelong will no doubt be back up at the top of the ladder come the end of the season, and continue its streak of making the finals, however, it's what the club does in finals which will be the determining factor, given past form from previous years across the last decade. However, many of the club's wins will probably come from playing at home - nine games at GMHBA Stadium -, helping the team go forward.

The more experienced players, and players starting to come into their own will be heavily relied upon once again, but it's equally important that the club try to find ways to blood the new players entering the mix of senior football, especially if they've been at the club for a while already, without a great amount of chances to make their mark at the top level.

With a damaging midfield unit, and an equally-dangerous combination of Tom Hawkins and Jeremy Cameron - who should have his injury troubles behind him - working in the forward line, the Cats will continue to be a benchmark of consistency in their results, and in their output as a team.