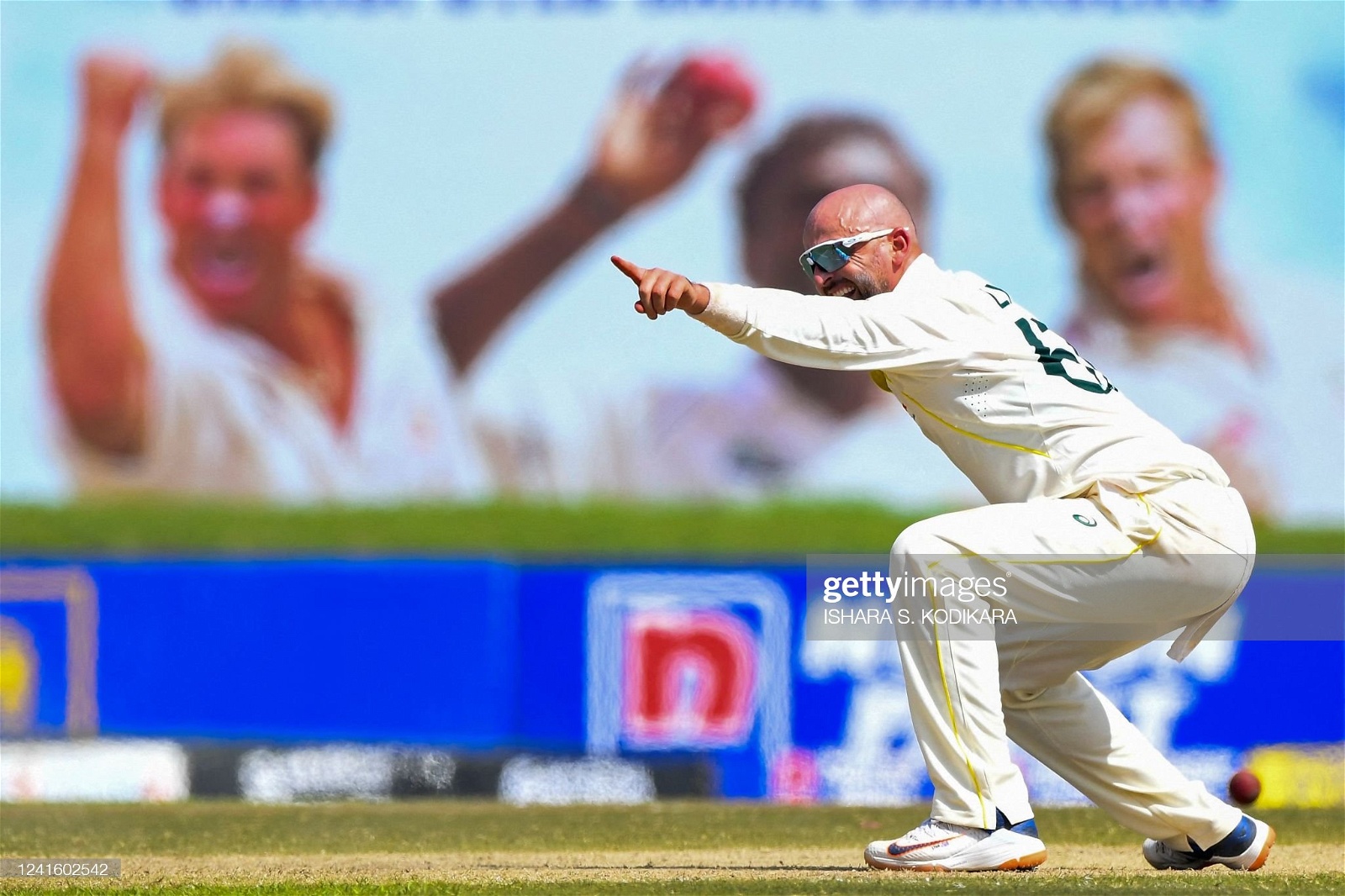 Nathan Lyon bowls Australia to advantage on day one in Galle

Nathan Lyon led the bowling lineup well once again taking five wickets in spinning conditions at Galle, and in the process went past Richard Hadlee for the most Test wickets of all time.

Nathan Lyon bowls Australia to advantage on day one in Galle

Nathan Lyon led the bowling lineup well once again taking five wickets in spinning conditions at Galle, and in the process went past Richard Hadlee for the most Test wickets of all time.

It was a fast-moving day one in Galle today with more than 300 runs being scored as well as 13 wickets falling. Given the pace of this match it's highly unlikely we see play for all five days but that is yet to be seen.

11 years ago Nathan Lyon made his debut in Sri Lanka with a five-wicket haul including the wicket of Kumar Sangakkara with his very first ball. While he had to wait a little longer today he still finished with five to make it his 20th five-wicket haul in his long Test career.

In the process of his five-wicket haul he went past New Zealand great Richard Hadlee and now only sits one behind Sri Lanka's own Rangana Herath.

Nathan Lyon said of the achievement, "I’m not where I stand on that list, it’s something I don’t look at, to be honest with you. The top end of wicket-takers in world cricket, to be joining guys and going past guys is something special and something I’m proud of. But it’s all about the team."

The day started with Pat Cummins losing the toss and the Aussies were forced to bowl first. It was clear from Lyon's first over that this would be a spinning track, and spin it did. Although it was the pace of Pat Cummins who took his only wicket when Pathum Nissanka edged one through to the keeper.

Not too long after that Mitchell Strarc provided the only other wicket for pace on day one when Kusal Mendis attempted to drive a full and wide one. The outside edge gave Carey his second catch of the day.

Lunch was taken with the contest relatively even with Dimuth Karunaratune and Angelo Mathews looking set at the crease with the score of 2/68.

It didn't take long until after the break before the precision of wickets in the middle session fell. Firstly it was Karunaratne who never really looked comfortable, he became Lyon's first victim thanks to a good diving grab from David Warner.

Mitchell Swepson then chipped in taking the wicket of Dhananjaya de Silva with an excellent spinning delivery that grabbed the outside edge on the way through to Carey. Another came from the next ball with Dinesh Chandimal getting an inside edge that went to Warner, and after a little juggle, Swepson was suddenly on a hattrick.

Since the time he took his maiden Test wicket in Pakistan, Swepson had bowled more than 70 overs before he finally broke that drought. The field came up for the hattrick opportunity but it was a no-go.

Niroshan Dickwella came in with plenty of pressure on him with the score on 5/97 but he rode that pressure perfectly. His innings was counter-attacking and he brought his 50 up off only 42 balls.

With only 16 of those being boundaries, it was clear his running game was key to posting the score that he did. Eventually though after tea not even Dickwella could get past the Lyon and Carey partnership. There was a bottom edge from a sweep shot that was held on nicely.

Lyon complimented the Dicwella innings, "Dickwella put the pressure back on us as bowlers in that middle session. Sometimes you need to tip your hat and say well batted. But I was really proud of how we came back after tea. But I see this game as even stay."

From there, wickets continued to fall regularly with Swepson and Lyon doing the majority of the bowling through the innings. Sri Lanka finished with 212 after 59 overs meaning that Australia would have a nasty couple of hours to bat before stumps.

At one point Lyon had bowled 22 overs straight through the middle and final seasons of the day all the more impressive when you consider his first over the injury.

"After my fourth ball, I had a little back spasm type of thing. I’ve never had one, I’ve been lucky with injured, but it didn’t prevent me from bowling.

"No doubt I’ll be having dinner in the team room and getting physio. It happened in the first over so it’s nothing that impressed me, so I’ll do everything to get enough rest and recover well."

Swepson did well with 3/55 although he was expensive going at more than four per over, Dickwella took a particular liking to him. It was however the best he has bowled with the baggy green in hand, his case to be Australia's next spinner is now clearly presented.

Lyon was also quick to compliment Mitch Swepson on his good work. "He is learning how hard Test cricket is, it’s a hard game to play. He’s in a good place and the way he’s been bowling is excellent. He will get his rewards and he’s doing all of the hard work. He bowled beautifully today," said Lyon.

It looks as if that case will not be needed for a long time though after doing some of his best work yet on the sub-continent. His 5/90 from 25 was just the start of what one feels will be a productive series for the veteran.

It would be a tricky 29-over session for the Aussies to bat out, although Sri Lanka didn't get through all of them. David Warner and Usman Khawaja made their intentions clear early, some would even suggest they took a leaf out of England's book.

The openers had taken 47 runs from the first nine overs before Warner missed a straight one that hit his back leg. Some may criticise him for missing a ball that went on straight but when a pitch turns this much it's the straight one that will always get you.

Marnus Labuchange and Usman Khawaja continued their aggressive ways although it slowed down when the right arm off-spin of Ramesh Mendis came into the attack.

Mendis looked dangerous getting in a good grove as well as spinning the ball a long way. Labuchange attempted a reverse sweep which he hit right in the air to the point fielder. A terrible shot that just wasn't needed towards the end of the day.

Steve Smith came out and looked scratchy but managed to get through some difficult times. His innings came to an end when he attempted a quick single with Usman Khawaja sending him back. The wicket came thanks to some good work by the fielder which allowed Dickwella to whip off the bails.

Smith was visibly furious with the call from Khawaja but at the end of the day, there was nothing Smith could do about it. What Khawaja needs to do now though is make up for that call and go big tomorrow.

He will have that chance when play begins again tomorrow at 3 pm AEST. Khawaja who sits on 47 will be joined by Travis Head who passed his fitness test this morning and is currently on six from 11 balls.

Overall it was Australia's day but Sri Lanka will be confident of their spinners such as Ramesh Mendis adding to his two wickets from today when play resumes.