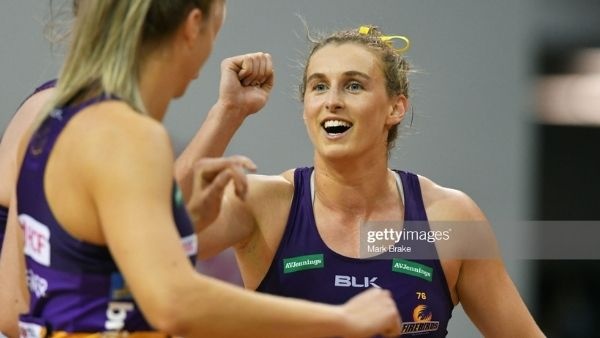 After five incredible years at the helm, Gabi Simpson has stepped aside as the Captain of the Queensland Firebirds.

After five incredible years at the helm, Gabi Simpson has stepped aside as the Captain of the Queensland Firebirds.

Queensland Firebirds legend Gabi Simpson has today announced that she will not be contesting for leadership in 2022.

Simpson has lead the Firebirds for five seasons after taking over the captaincy from Laura Geitz in 2017 and has become one of the Firebirds longest serving captains.

Simpson said she was incredibly proud to have led the club for as long as she did and leaves the role better for the experience.

“Captaining the Firebirds has been one of my greatest honours. I am unbelievably grateful for my five years in the role,” Simpson said.

“I have grown as a person, a leader and a player from my experiences and it has brought me so much joy spreading the heartbeat of the Firebirds throughout Queensland and Australia.

“It has been a huge part in building me into the person that I am.”

The 28 year old said that she used the off-season to stop and reflect about netball and life. Although she admitted it was hard to step away from the role, she's looking forward to getting stuck into her 10th season in purple.

“I know the time is right.

“I have loved giving my absolute heart, soul and energy to this club as captain for the past five years as I know no other way and it’s what the club deserves.

“Whoever steps into the role will bring a wonderful, fresh energy and drive and I will have an opportunity to follow their lead while redirecting a little bit of my energy to the areas that will help me feel the most energised and freest version of myself both on and off the court.

“I also know the time is right because this group is a bunch of passionate hungry players who are already leading the way."

FIREBIRDS TO HEAD NORTH FOR PRE-SEASON BATTLE IN MACKAY

A much-loved member of the Firebirds side throughout her time leading the club, Simpson made a special mention of the members who kept the faith during both the good and the tough times.

“Netball is an incredible community that can create a place where we all feel like we belong, riding the highs and lows together.

“Our Firebirds fans remind me of that year in year out. The heartbeat of this club is like no other and it is an absolute honour to share that heartbeat with our fans.”

Queensland Firebirds head coach Megan Anderson said even after a season at the helm of the Firebirds she can see why Simpson was highly regarded at the club.

“Gabi has this amazing ability to take a broad outside view of the situation and really consider what effect it would have on the team, her empathy is second to none,” Anderson said.

“She is always striving to improve her game and turn up with her trademark intensity and passion to every session, which in turn encourages others to do the same.

As Simpson passes the torch to the next captain of the Firebirds, Anderson praised Simpson and the way she's led the club for the last five years.

“Gabs has left (and will continue to do so) an incredible legacy on the Firebirds club, and I guarantee the purple family as well.

“Everyone you speak to who loves netball in Queensland, loves Gabi Simpson. Gabi is the ultimate professional and is such a great spokesperson for the Firebirds out in the community and on behalf of Netball Queensland.

“The players that experienced her captaincy over the years will attest to her amazing kindness and her will to put the players first in any decision making that occurred. She really embodies the Team First attitude that we love at this club.”

The Queensland Firebirds will announce the club's leadership team over the coming weeks but whoever the next captain or captains are of the Firebirds it's going to be big shoes to fill.