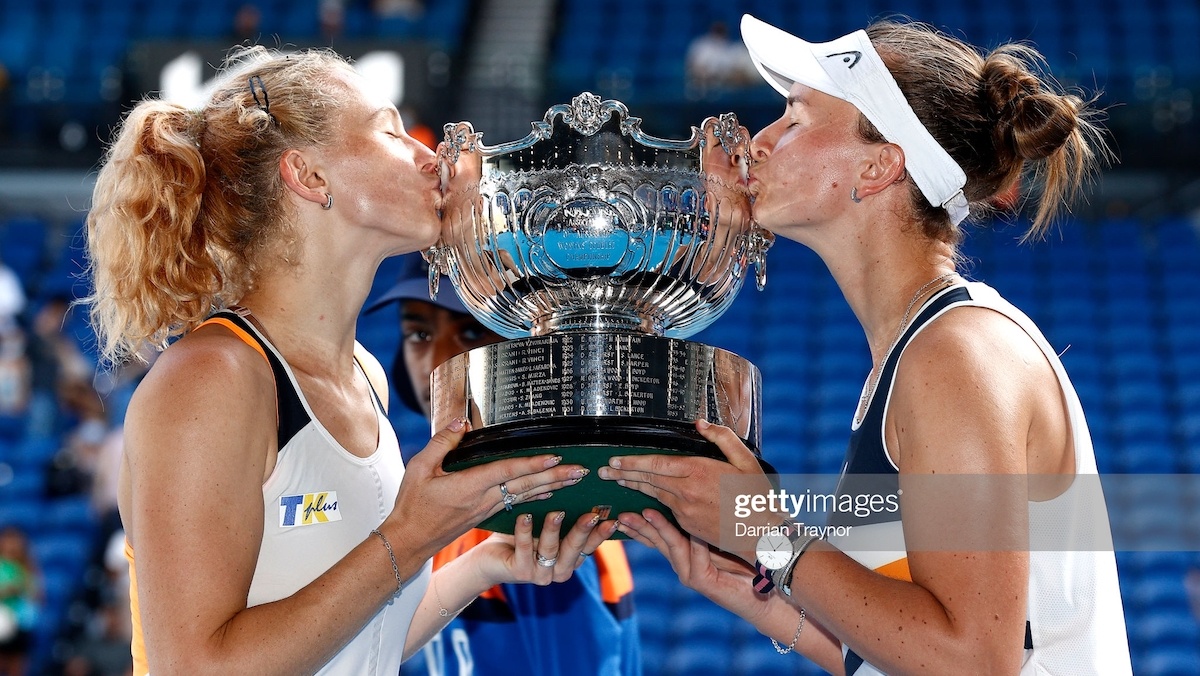 From runners up to Champions, Krejčíková and Siniaková win first Australian Open title

It wasn't easy, but the number one seeds Barbora Krejčíková and Kateřina Siniaková have won their first Australian Open title.

From runners up to Champions, Krejčíková and Siniaková win first Australian Open title

It wasn't easy, but the number one seeds Barbora Krejčíková and Kateřina Siniaková have won their first Australian Open title.

Runners up in Australia in 2021, last year's French Open and Olympic champions Krejčíková and Siniaková did it the hard way after dropping their first set for the tournament to begin Sunday's final.

Their opponents, Russian born, Kazakhstani Anna Danilina and Brazilian Beatriz Haddad Maia were aggressive and fought hard, as they had all tournament. The new pairing could not find the fairytale finish to their successful January in Australia but will be ones to watch this season.

The Czech pairing knocked out the third and ninth seeds on their way to the final. Their opponents only faced a seeded pair in the semi-final, where they defeated second seeds, Japanese pair Ena Shibahara and Shuko Aoyama, for the second time in a month, to move through to Sunday's final.

The unseeded Kazakhstani-Brazillian pair only teamed up recently but won the Sydney International earlier this month.

Unsurprisingly, the combinations have never played each other on tour.

Krejčíková served first in a back-and-forth opening game. A solid hold for the pairings' stronger server was a good result, as the unseeded duo attacked early.

Haddad Maia opened the serving with a comfortable game, and the pair were able to immediately resume their pressure on the Krejčíková/Siniaková service game.

Haddad Maia challenged the passing shot to set up a breakpoint opportunity and Danilina at the net volleyed straight into the body to secure it. The pair took an early lead in the first set, 2-1.

Aiming to consolidate, Danilina had some trouble on her service game, however, the pair worked to set up forced errors off the racquets of the Czechs and held their lead.

Krejčíková held comfortably once again, the seeds settling into the afternoon match on Rod Laver Arena.

A long forehand and then an unforced error into the net from Danilina put them on the back foot in her service game, but she hit backhand winner up the line to level it at 30-30.

Some tentative serving from Danilina set up a break-back opportunity for the Czech's and they took it, the first set back on serve at 4-all.

Krejčíková served for three games in a row for the number one seeds and put the pressure back on Haddad Maia to keep them in the opening set.

A backhanded volley miss-hit from Danilina gifted the opening point of the most important game of the set to their opponents. The scoreboard pressure only increased as Haddad Maia missed a forehand in the air.

They recovered, winning the next four points to keep proceedings on serve in the first.

Siniaková was back under pressure serving to stay ahead, and as things went point-for-point, the Czech pair started to crumble. A backhand and then forehand unforced error handed the break to Haddad Maia and Danilina, the latter would serve for the set.

For the second time in the match, Danilina was broken. The seeds had two break points and only needed one, with Danilina putting a loopy forehand long to send the opening set to a tiebreaker.

With the early advantage secured, Haddad Maia served an ace, before she drew the errors from Siniaková to take a 6-0 lead in the tiebreaker for the Brazillian-Kazakhstani combination.

While they were able to save three thanks to strong serving by Krejčíková, the Czech's dropped their first set for the tournament, 7-3 in the tiebreak.

To start the second set, Haddad Maia served first and the Brazillian served the opening two points well, while also outplaying Siniaková in a groundstroke battle.

Krejčíková found an opening down the line with the forehand and nailed it for another break point. Incredible defence at the baseline from Haddad Maia saved the opportunity, though she sent a backhand long to give up the advantage again.

On the second break point, Haddad Maia served a double fault, her third for the game, to hand the early lead to the number ones.

Krejčíková consolidated with ease before Danilina did much the same - an important service game from the Kazakhstani, who had struggled to hold in the first set.

The other player who had had difficulty with her serve, Siniaková, was serving next and her troubles from the opener continued.

Though miscommunication between Danilina and Haddad Maia gave her breathing room, a ripping forehand from Danilina set up deuce. Siniaková held on for the 3-1 lead.

Unlike her opening game this set, where she had difficulty serving, Haddad Maia gave up just one point - the first - this time around.

The only player on the court yet to drop a service game put herself under pressure with two double faults in a row. Krejčíková pulled her team back in it with a strong serve that Siniaková could finish at the net and then served it out.

Danilina and Siniaková had solid games, as did Haddad Maia, who put it back on Krejčíková to serve out the set and level the match at one apiece.

And the number one seeds did exactly that, unforced errors from Danilina and Haddad Maia gifted it to the Czechs.

Back all-square after Krejčíková and Siniaková had dropped their first set for the Australian Open, the Women's Doubles final was set up for an exciting finish to the event.

In contrast to the start of the second set, Haddad Maia held her serve to love, an important start for the unseeded pairing.

Krejčíková put the Czechs on the board, she controlled the service game and targeted Danilina on the baseline, who ultimately put a forehand wide.

Signs of Siniaková's nerves crept back into her first service game in the third, two double faults gave Danilina and Haddad Maia a sniff, and a third offered up a second break point for the game, but the Czechs recovered nicely to keep the scoreboard level.

A remarkable point, featuring three volley returns from Danilina and baseline saves from Haddad Maia was not enough to save the break on Haddad Maia's serve. The Brazilian dropped her second service game for the match and the duo was behind in the decider.

Krejčíková consolidated and the pair broke again, putting Danilina's service game under strain for the third time this match, the Czechs were too good, while their opponents failed to hold their nerve in their first Grand Slam final.

Not done with yet, Danilina and Haddad Maia had nothing to lose as they smashed through Siniaková's serve to break back. The Czech's dropped their first chance to sew up the win.

The twists continued with Haddad Maia serving one of the pair's most concise and confident games of the match to force the number ones to serve it out on the second attempt.

With the freedom to attack the serve of Krejčíková, Danilina and Haddad Maia pushed the Czech pair with longer rallies and encouraged them to take the risks.

A series of lobs back and forth ended with Danilina caught moving forward when she needed to go back, and with it, Krejčíková and Siniaková became Australian Open champions.

After falling at the final hurdle in 2021 to Elise Mertens and Aryna Sabalenka, Krejčíková and Siniaková found success in Australia in 2022.