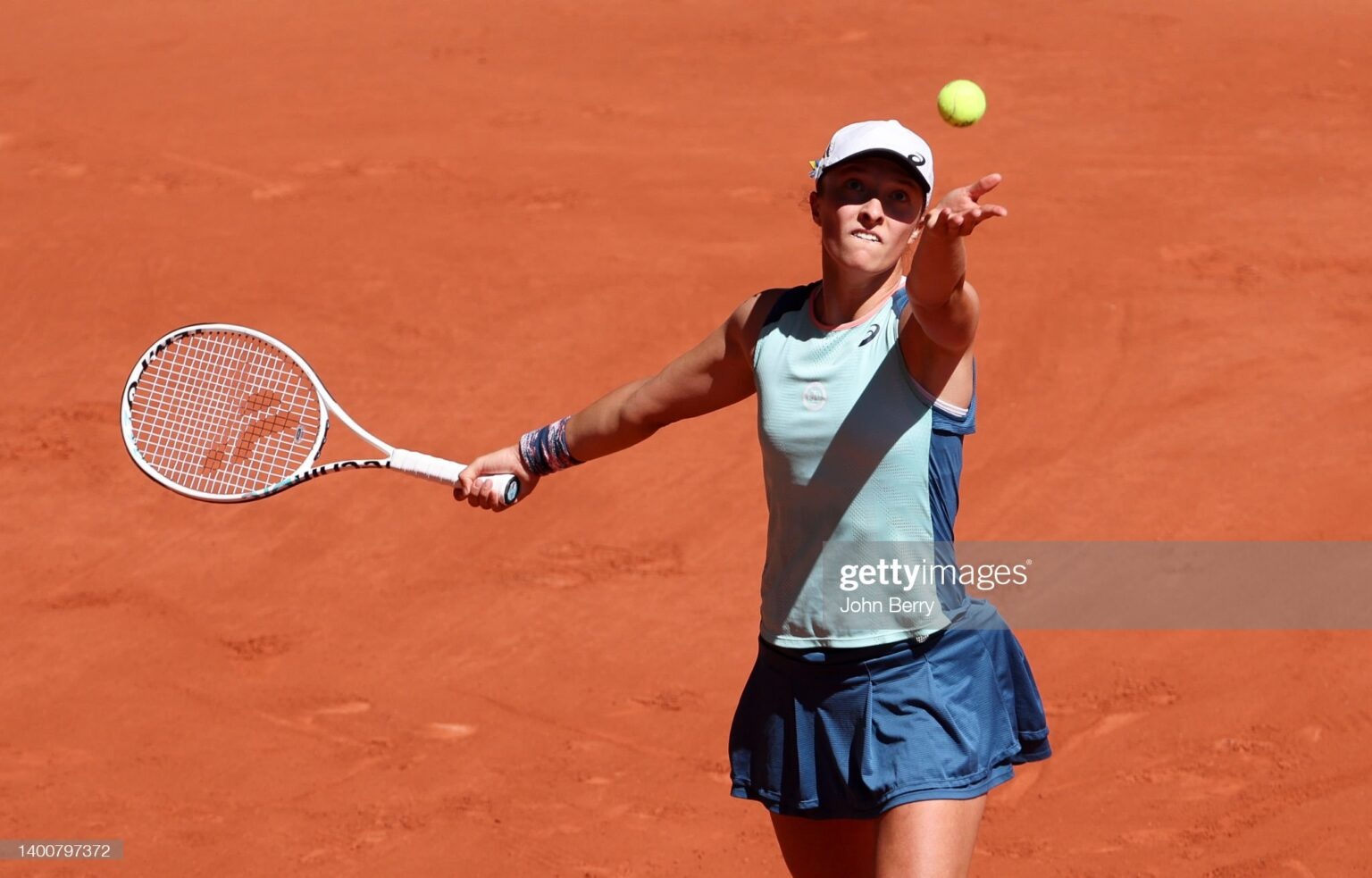 The 2022 French Open is winding to a climax, as the semi finals unfolded with drama, and the possibility of history just around the corner.

The 2022 French Open is winding to a climax, as the semi finals unfolded with drama, and the possibility of history just around the corner.

The singles finals are all decided now, as the sun starts to set on Roland Garros for another year. Catch up on all the action from the final four, as the singles competitions narrowed down to the end.

Can anybody stop Iga?

World Number One Iga Swiatek was up against young Russian Daria Kasatkina. Swiatek started with a double fault, but within a flash was up a break over Kasatkina, and looked in total control. Kasatkina did break back, but gave up her serve again, with Swiatek on the front foot early.

In the blink of an eye, the first set went from 2-2 to 6-2, as Swiatek worked her way through her gears as she overpowered the 20th seed.

Within minutes, the second set took on the same tone as the first, as Swiatek raced to a 4-1 lead, to be just inches from booking her place in the final. The momentum continued, as Swiatek eased into the final with one final service break, taking the second set 6-1.

The Polish star has now won 34 matches in a row and has hardly been troubled on her way to the French Open final.

On the other half of the draw, teenage sensation Coco Gauff was in her first Grand Slam semi-final, up against Martina Trevisan. Gauff got the upper hand early, with a break early in the first set, but gave the break back immediately.

Gauff and Trevisan continued to trade breaks until Gauff finally held at 4-3, and then broke Trevisan to take the first set 6-3. The backdrop for the first set was a series of noise complaints about Trevisan's post-shot grunting, and a number of close calls that the umpire had to come down to the court to inspect.

Between sets, Trevisan received some treatment for her right leg, and she managed to hold her first service game in the second set.

Gauff then broke the Italian's serve the next time around, and then accelerated away to make it a double break in a matter of minutes. Shortly afterwards, Gauff converted one of three match points and booked her place in the final for the first time at a Grand Slam tournament.

The King of Clay still stands

Alexander Zverev jumped out of the blocks against Rafa Nadal, breaking the Spaniard's serve in the first game of the match. Zveerev had all his power and speed on show, as he ran Nadal around the court from the beginning.

Midway through the first set, Nadal started to find his feet, as he broke back in the eighth game of the match, to level it at 4-4. Both players ratcheted up their game another gear following that, with no easy hold of serve for either player for the rest of the set, as it was sent to a tiebreak after more than an hour on court.

Nadal would come out on top of the marathon first set, after winning a gruelling tiebreak 10-8, with Nadal clawing back from four set points down finishing it off with his first forehand winner of the match.

The second set started with the same ferocity as the first, except with four consecutive breaks of serve. Zverev finally held in the fifth game of the set, to make it 3-2, and then broke Nadal to give himself an advantage in the second set.

The German was in control, as he served for the set at 5-4, before three double faults gifted Nadal the break to get back into the set.

The gruelling matchup continued, with both players trading breaks of serve to get the match to 6-6. In taking it that far, in just over three hours, Zverev fell heavily, as his ankle gave way as he hit the final error to send the match to another tiebreak, at 6-6.

Zverev was taken off the court in a wheelchair after his ankle gave way, and returned to the court on crutches, as he retired from the match, ending the thrilling semi and sending Nadal into his 14th Roland Garros final.

Across the draw, Marin Cilic was facing rising Norwegian Casper Ruud. Cilic, as the more experienced player, settled quickly and took the first break of service.

Cilic would go on to run away with the first set, using his big serve, and dominating Rudd to make it a double break and the first set.

Ruud came out in the second set a different player, as he weathered the storm of Cilic's serve to steal a break early in the second set. The second set proceeded as a battle of the titans before Ruud stepped up to serve for the set. He threw himself behind the eight-ball, giving Cilic three break points, but staved off the 20th seed to take the second set and level the match.

Aussie Heath Davidson has been the last Aussie flying the flag this week. Competing with a new quad wheelchairs doubles partner (after the retirement of Dylan Alcott), Davidson and Brazilian Ymanitu Silva reached the final of the quad doubles.

Davidson also reached the semi-finals in the quad wheelchair singles, before falling to Dutch wunderkind Neils Vink in their semi-final. Hours after their singles battle, Davidson and Vink were on the court again, this time with Silva, and Vink's doubles partner, Sam Schroder.

Schroder and Vink gave Alcott and Davidson plenty of trouble, and the same was the case with a new doubles partner for Davidson, as the Dutch duo were able to seal the title in straight sets.

Davidsod welcomed the expansion of the quads draw at the French Open this year, leaving fans wondering if Wimbledon will expand to an eight-player draw this season or be the last Grand Slam to at four.

Schroder and Vink are also set to face off in the quad singles final, but they aren't the only ones with the potential to take out two titles in Paris. The day after reaching her first singles Grand Slam final, Coco Gauff found herself in the Women's Doubles semi-final, alongside countrywoman Jessica Pegula.

The American duo easily accounted for another American duo, in Madison Keys and Taylor Townsend, in an all-American semi-final. Gauff and Pegula, both accomplished singles players, were able to get on top and win through in straight sets.

In the other semi-final, 14th seed Jelena Ostapenko and Lyudmyla Kichenok were upset by Caroline Garcia and Kristina Mladenovic. The unseeded duo were outclassed in the first set, as they lost with a double break.

They quickly settled through, finding their rhythm against their highly ranked opponents, and reeled off a complete performance in the final two sets to take the match.

In the Men's Doubles semi-finals, Austin Krajicek and Ivan Dodig booked their place in the final, as they beat the fourth-seeded pair, Marcel Granollers and Horacio Zeballos in three sets. The winning pair conceded the first set, before taking the second in a tiebreak, and then running away with the break of serve in the third to book their place in the final.

The 12th seeded pair of Jean-Julien Rojer and Marcelo Arevalo also found themselves down after one set, trailing 16th seeded Matwe Middelkoop and Rohan Bopanna. The higher-seeded duo fought back though, taking the final two sets to book their place in the final.