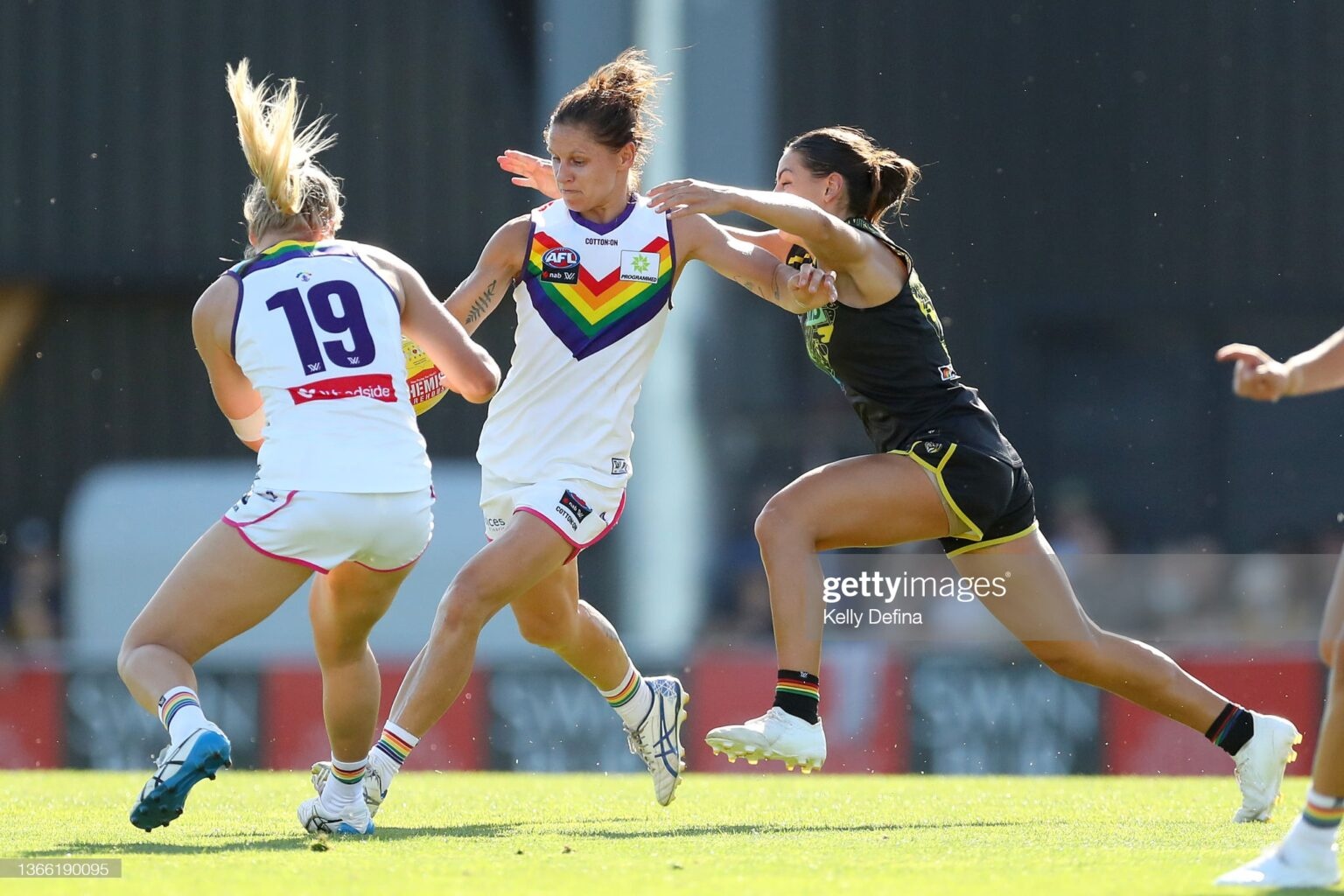 Fremantle run away from the Tigers attack in AFLW Round 3

AFLW Round 3 continued, as the Richmond Tigers came out fast against the Fremantle Dockers, but the Dockers weathered the storm to dominate.

Fremantle run away from the Tigers attack in AFLW Round 3

AFLW Round 3 continued, as the Richmond Tigers came out fast against the Fremantle Dockers, but the Dockers weathered the storm to dominate.

The Fremantle Dockers have survived a hard-fought first half to run away with an emphatic win over the Richmond Tigers this afternoon at Swinburne Centre, finishing 11.11 (77) to 7.5 (47) winners.

It was the first time the Tigers and Dockers had met since the Tigers joined the competition in 2020.

The Tigers started fast, with the desperation of a side knowing it is going up against one of the form teams of the competition, and wanting to bounce back after a loss last weekend.

Their intensity was matched by the Dockers, who are premiership contenders and have dispatched all their opponents so far this season.

As the Dockers came out of the blocks, leading at the front was three-time All Australian Kiara Bowers. Bowers finished with 28 disposals, 16 tackles and some bruises dished out, as she exuded physicality and effort all match.

The first quarter had just one goal scored, as Gemma Houghton capitalised on a downfield free kick to slot the opener just before the siren sounded.

Ebony Antonio continued to plug her nominations for Goal of the Year with another sterling effort as she maintained her good form with another two goals.

The Tigers came out with the same intensity to start the second term, but they were matched by the Dockers, who looked to be running away with a win, before Sophie Molan and Emelia Yassir pegged them back.

It was a milestone goal for each of Molan and Yassir, as they scored their first AFLW goals.

The match turned for the Tigers, as Harriet Cordner went down with a serious-looking non-contact knee injury. Cordner was carried off, and despite the best efforts of Monique Conti and Katie Brennan, it appeared as if the wind went out of the sails of the Tigers slightly.

PIES COME OUT UNSCATHED AND UNDEFEATED IN PHYSICAL CONTEST AGAINST CATS

OPINION:WESTCOAST CAN’T AFFORD TO CONTINUE TO FLOUNDER OVER LACK OF PRIDE

Gemma Houghton had a dagger for the Dockers, slotting a set shot after the siren at three quarter time, and after the break, the Dockers came out with a vengeance.

With the breeze at their backs, the Dockers showed an animal killer instinct to kick five unanswered goals to start the final term, and by the time the dust settled, the margin was more than 40 points.

Although the Tigers pegged back two goals in the last few minutes, the final score of five goals probably reflected the gulf between the teams, as the Dockers stamped their credentials.

Bowers and Conti were the dominant players on the ground for each team, as the only players with more than 20 disposals, and Bowers had a third week with double digit tackles.

Houghton and Gabby Antonio were particularly successful in applying forward pressure, keeping the Richmond defence under siege all day, even when they had the ball.

The Tigers will take heart from knowing that they contended with a premiership favourite for three quarters, and a stiff breeze to start the last quarter did not help their chances.

All eyes will be on Cordner this week, in the hope that her injury is not as serious as it appeared.

The Tigers play the Gold Coast Suns next week, and will hope to arrest a two-game losing streak then. Fremantle take on Collingwood in a blockbuster clash scheduled for Sunday afternoon.