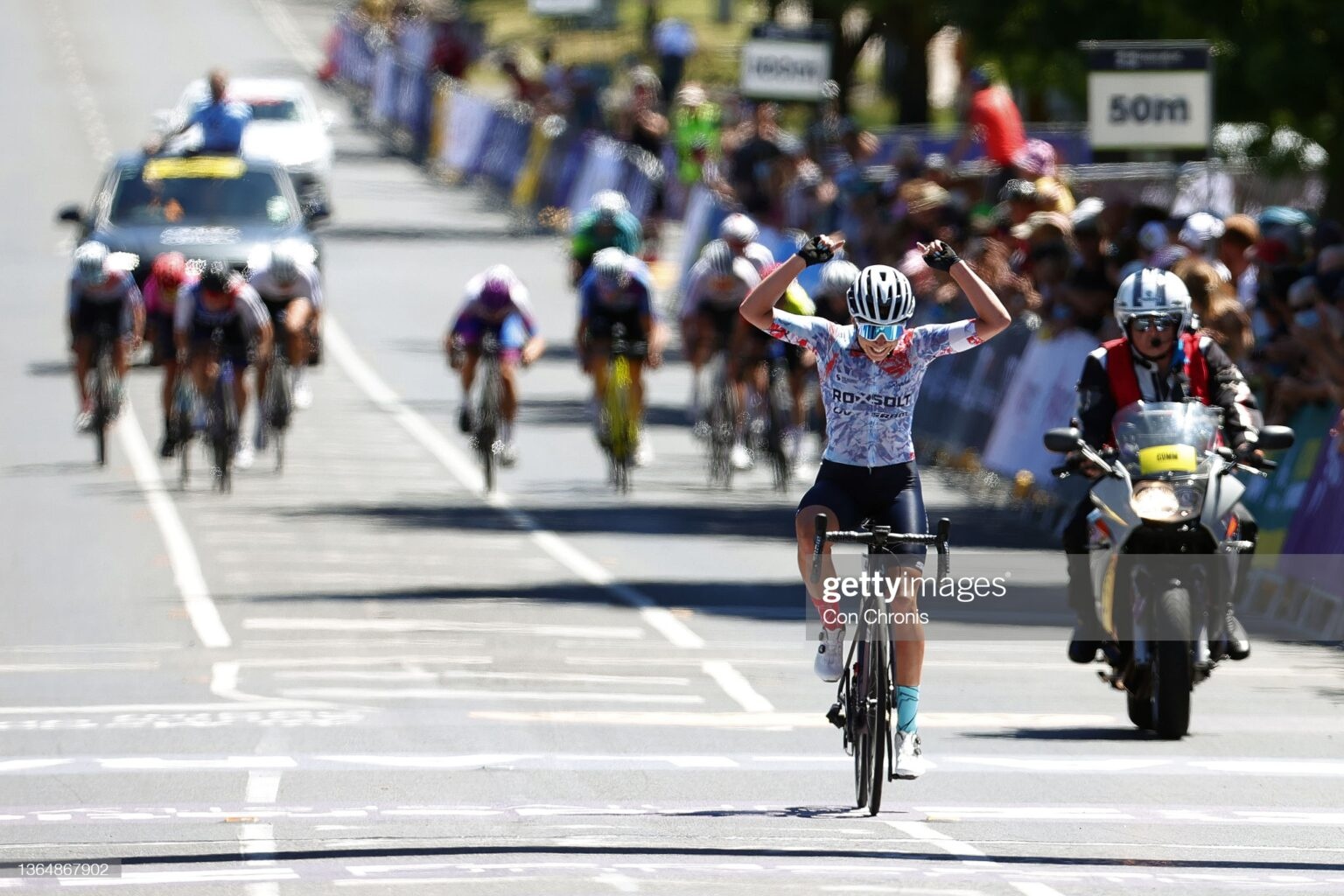 Nicole Frain pulled off a late, daring attack to beat the pre-race favourites and be crowned the National Champion in the Women's Road Race.

Nicole Frain pulled off a late, daring attack to beat the pre-race favourites and be crowned the National Champion in the Women's Road Race.

In a major upset in the Elite Women's race in the Australian Road Cycling National Championships, Nicole Frain of Team Roxsolt Liv SRAM held on with a daring attack to beat home the pre-race favourites.

The race was marred early by a large crash that reduced the peloton to just 52 riders on the second of nine laps of the course of Mt Buninyong. Despite the reduced peloton, Roxsolt Liv SRAM had the numbers, and proceeded to get on the attack to try and agitate the race.

While most of the moves came to nought, in the end, the attitude was enough. Roxsolt Liv SRAM made sure that the racing was fast, and that with someone at the front at all times, the favourites were never able to relax. By the time the race had 50km to go, there were only a couple of riders that had teammates left in the front bunch, except for Roxsolt Liv SRAM, who had four.

The attack that changed the race was with 30km to go. Pre-race favourites Grace Brown (FDJ Nouvelle Aquilies) and Ruby Roseman-Gannon tried to make a move just after the group had crested the hill. The attack didn't get far, but Emily Herfoss (Roxsolt Liv SRAM) made a strong move and had a gap to ride with.

Herfoss continued to ride, trying to get away for a solo break and victory. She was quickly chased by Matilda Raynolds (Inform TMX Make) and teammate Tilly Field. Field sat on the back of Raynolds, as she continued to chase Herfoss.

With 15km to go, Raynolds and Field caught and dropped Herfoss, who was running out of steam.

As they approached the climb for the final time, Raynolds distanced Field, and appeared set to make the championship her own.

But even for Raynolds, it wasn't to be. She was reeled in on the last ascent up Mount Buninyong, as Brown, Neve Bradbury (Canyon SRAM) and Rachel Neylan (Cofidis) agitated the pace, trying to get away.

With Alex Manly (Team BikeExchange) and Georgie Howe (Knights of Suburbia) caught slightly behind, Roxsolt Liv SRAM was the only team with multiple riders near the front, with Frain and Field still in the mix.

Neylan, Brown and Bradbury all made attacks with less than five kilometres to go, as they tried to sneak away for their own solo victory.

As the group started to get close, Manly joined back up, giving pre-race favourite Roseman-Gannon a teammate, and a possible numerical advantage if it came to a bunch sprint.

It didn't look like Nicole Frain wanted to find out if she could beat Roseman-Gannon in a sprint. Instead, Frain went on a daring solo attack with just over 1500m remaining in the race.

A small 15-second gap appeared as Frain went all out for the solo victory, and the group behind became disorganised. With Manly the only teammate in the group, most riders were unwilling to sacrifice their chances for the chase.

Brown, and eventually Manly each launched counterattacks, but it was too little too late. Frain had just large enough a gap that she could enjoy the moment with 200m left, knowing that the group behind her weren't able to catch her.

Frain paid tribute to her teammate's effort immediately after the race.

"It was for Emily [Herfoss] and I, we were trying to go for it. Justine [Barrow] made it hard over the climb, just such a good job, and I'm so happy for us," Frain told the broadcast.

"I don't have any words, I'm so happy. When I attacked, I thought I'd trust my cornering and see what happened, but when I opened the gap, I had to go all in. The girls I was up against, I'm generally not going to outsprint Ruby [Roseman-Gannon], especially with the form she's in at the moment."

Frain, and the Roxsolt Liv SRAM team will celebrate the national championship, and a well-executed team plan.