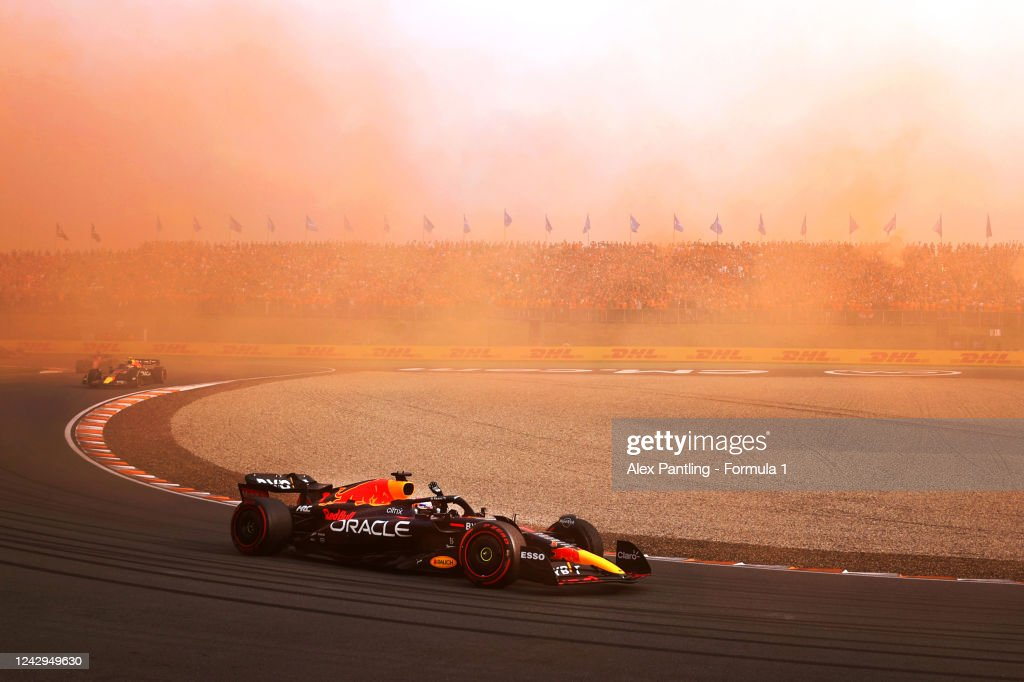 The Dutch Grand Prix went to plan for Red Bull while an ascendant Mercedes proved we might not be too far away from its first win of the season.

The Dutch Grand Prix went to plan for Red Bull while an ascendant Mercedes proved we might not be too far away from its first win of the season.

The orange army was out in full force to watch Max Verstappen nab his fourth consecutive win; Mercedes finally looked back in the game while Alpine continued to prove why it's winning the mid-field battle this season.

With the Dutch Grand Prix done and dusted for another year, the second half of the season is looking like it could be dominated by one driver and one driver alone.

At his third home race for the season, Max Verstappen earned his fourth consecutive win and 10th win of the year, inching ever so closer to equalling the current record of 13 wins in a single season.

There's no doubt that George Russell and the Mercedes car are improving with every race weekend. Still, the 24-year-old Brit showed ambition in the Netherlands, proving when the time comes, he will chase an individual win over his own teammate if he sees an opportunity.

Qualifying in sixth, Mercedes' strategy looked to be the one of choice, but when it was upset by the VSC and both cars were put on to mediums, Russell decided to take matters into his own hands, demanding to be put on softs under the Bottas caused safety car and locking in a second-place finish behind Verstappen with Hamilton stuck on mediums.

Strategies A and C might not have gone Ferrari's way on race day, but Leclerc finally had some luck when he earned his first podium in five races.

In qualifying, only 0.021 seconds separated him from pole sitter Verstappen. The 24-year-old didn't do much wrong throughout the race, with the car simply lacking the pace that the Red Bull and Mercedes cars had.

Mercedes and Lewis Hamilton came so close to mastering the one-stop strategy at Zandvoort, and if it weren't for the safety cars, perhaps Hamilton would have been able to claim his first win of the season.

Sinking from first to fourth following the end of the safety car, fans were given flashbacks to Leclerc's fall in Silverstone. However, despite Hamilton's frustrations being clearly voiced on the radio, the seven-time World Champion appeared to take a lot of positives away from the second week of the triple header.

With teammate Verstappen making the most of the Red Bull car in recent weeks, Sergio Perez can't quite find the same form he had earlier in the season.

Leclerc might have gotten a week of reprieve from Ferrari's mishaps, but that misfortune turned in Carlos Sainz's direction in Zandvoort, with two pit stops ruining the Spaniard's race.

It'll be a question of what could have been for Sainz, who started in third on Sunday after a great qualifying performance but come Sunday, Ferrari did what has now become all too typical of them.

Starting with a 12-second pit stop due to the mechanics forgetting the left rear tyre and ending with an unsafe release under the safety car that earned him a five-second penalty that plummeted his fifth-place finish to eighth.

Esteban Ocon and the Alpines looked like they were going to be having some trouble after a Q2 exit in qualifying, starting 12th on the grid. However, the Frenchman wasn't about to let that keep him out of the points. Fighting with Norris for most of the race, Ocon had to settle for ninth on Sunday but proved once again he's more comfortable over a race than over a single lap in qualifying.

Seven once again proved to be Lando Norris' lucky number after he qualified in seventh and was promoted to seventh at the end of the race due to Sainz's penalty. It was the only thing McLaren had to celebrate in the triple header so far, with Norris making up for the poor performance in Belgium this weekend.

Just like his teammate, Fernando Alonso did not set himself up for an easy fight on race day after a poor performance in qualifying. However, making the most out of a great start, Alonso found his way advancing up the grid thanks to Alpine throwing him onto the hard compound tyres early. Another to profit off the Sainz penalty, Alonso nabbed a sixth-place finish.

Missing out on Q3 by less than a tenth of a second, Pierre Gasly looked was in prime position to earn points this weekend. However, it wasn't meant to be with the other lower field teams that qualified ahead of him getting easily replaced by the Alpines. Gasly still put in a solid performance, finishing right where he started just out of the points.

Alex Albon continues to outperform the Williams' car earning a 15th place start on the grid and working his way into 12th, getting as high as sixth due to the call to pit late. Albon had no trouble keeping off the back of the field, defending against the Alfa Romeos and getting stuck in the middle of a DRS train following the safety car.

Few drivers in the middle of the field looked more comfortable in Zandvoort than Lance Stroll. If it weren't for a technical issue in Q3, Stroll could have had a higher start on the grid on race day.

Aston Martin managed to resolve any issues before the start of the race, and the Canadian found himself battling with Ocon and Gasly to stay in the points. Only scoring five points so far from the season, Stroll now has a point to prove that he can advance further up the grid and beat his teammate.

Sebastian Vettel couldn't maintain his solid performance in Belgium at the Dutch Grand Prix, starting 19th on the grid. The four-time World Champion didn't have much hope of working his way back into the points. Vettel kept it together and worked his way up the grid for a 14th-place finish.

Daniel Ricciardo cannot win a trick lately, struggling in qualifying, unable to put a perfect lap together. With a low start on the grid, Ricciardo had a lot of work to do and losing over two minutes of time due to McLaren pitting him five times for the race, a 17th place finish was all he could afford caught at the back of a late DRS train.

Another poor performer in qualifying, Kevin Magnussen, had a lot of ground to make up starting 18th on the grid, and he managed to earn a 15th place finish, defending against Zhou and Ricciardo while chasing down Vettel in the later stages of the race.

It's been a long time since Valtteri Bottas has seen the chequered flag, earning his third DNF in a row and fifth for the season. Once again the victim of an engine reliability issue, Bottas was forced to retire on lap 55, causing an extended safety car.

Before then, it wasn't a poor weekend from Bottas, who qualified in 16th, working his way up to 13th, keeping the pace with Albon before he retired.

Mick Schumacher was another driver to have pit stop drama, losing the advantage he'd earned after finishing eighth in qualifying. An extended pitstop resulted in Schumacher tumbling down the grid to battle with Vettel for a large portion of the race, earning a 13th place finish, his strongest performance since scoring points at the Austrian Grand Prix.

The lone Alfa Romeo to finish in Zandvoort, Zhou Guanyu might not have finished in the points but has put together repeat performances to finish for the third race in a row, the best he's done since the five-race stint at the start of the season. The rookie driver managed to hold off Ricciardo for a second week in a row but was once again caught in a late DRS train preventing him from climbing further up the standings.

Sainz might have had pit stop drama early in the race but Yuki Tsunoda was caught up in a bizarre situation on race day despite putting in a strong qualifying performance that landed him ninth on the grid after qualifying.

Dropping back in the field, Tsunoda's dramatics started following a pit stop where the Alpha Tauri driver was left convinced that he had a loose front tyre. Pulling over to the side of the track, Tsunoda was lapped by the field before he got going again after his team claimed the car was fine, only to have a 40-second pit stop with the mechanics fixing his seatbelt whilst putting him on new tyres.

Tsunoda was once again lapped by the field and tried to get going again, only to retire the car just a few corners into the lap. It was a race-deciding moment that has caused controversy but Tsunoda's exit from the race seems to be yet another issue with the Alpha Tauri car.

It was a fairly standard weekend for Latifi who started last on the grid and finished last amongst the finishers, but that wasn't to say all too many errors were made by the Canadia. While his teammate Albon has come back following the summer break making the most out of the Williams car Latifi simply doesn't have the pace.