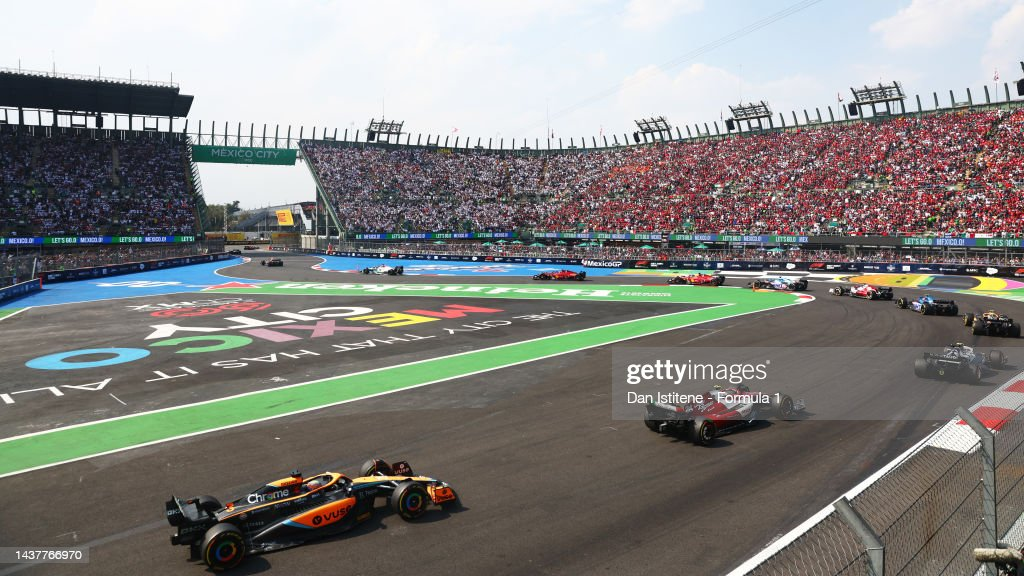 Part two of the North American double header saw F1 return to Mexico and Daniel Ricciardo return to form finishing best of the rest at the Autódromo Hermanos Rodríguez.

Part two of the North American double header saw F1 return to Mexico and Daniel Ricciardo return to form finishing best of the rest at the Autódromo Hermanos Rodríguez.

Despite Max Verstappen breaking the most wins in a season record at the Mexico City Grand Prix, all anyone was talking about was Daniel Ricciardo's stunning return to form to finish seventh despite a 10-second penalty for taking out Alpha Tauri's Yuki Tsunoda with 20 laps to go.

Attention might have been off Max Verstappen now that the Drivers' and Constructors' have been wrapped up, it was easy to miss that the Dutchman conquered Vettel and Michael Schumacher's record of 13 wins in a season, and Verstappen made number 14 look oh so easy.

With pole position being something of a bogey at the Mexico City Grand Prix, Verstappen qualifying on pole might have made things look difficult but coming out of the first chicane he was streets ahead and never looked back.

Lewis Hamilton is getting closer and closer to his first win of the season, despite running on a less-than-ideal tyre strategy. The seven-time World Champion got off to a brilliant start slotting in right behind Verstappen after starting in third and holding position for most of the race despite Perez hunting him down.

With Brazil up next and one of Hamilton's favoured track, it could be the closest he's going to get in the final races of the season.

Sergio Perez was thriving at his home race finishing on the podium for the second year in a row. Qualifying in fourth, Perez took advantage of the ordinary start from Russell and slotted into the podium positions early.

However, a large part of his race was focused on tyre management. Pitting earlier than Verstappen, Perez had a near 50-lap stint on the medium compound tyres and despite worries that the mediums wouldn't last, the Mexican milked them until the end of the race just three seconds behind Hamilton.

Charles Leclerc's 100th Grand Prix wasn't a memorable one, through no fault of his own. Qualifying in seventh, Leclerc was up into sixth in no time at all but couldn't get ahead of his teammate or attack the Red Bull and Mercedes vehicles.

It wasn't due to any mistakes on his or Ferrari's part, the car just didn't have the life in it and Leclerc largely by virtue of his lower qualifying position finished lower than his teammate Sainz.

Crashing his rivals out of the race was so last weekend for George Russell and instead, it was the Mercedes pit wall he had in his sights, talking on the radio repeatedly throughout the race making it abundantly clear he thought the team had picked the wrong strategy.

While Russell was right and vindicated by Daniel Ricciardo's superb performance, the 24-year-old seemed unwilling to make the hard tyre work, failing to close the gap between Perez. However, Mercedes and Russell made the right call late in the race choosing to pit for soft tyres while keeping his fourth-place position and earning his third-fastest lap point in four races.

Despite no poor strategy calls or reliability issues, it just wasn't a good weekend for Ferrari and Carlos Sainz with the Spaniard struggling to keep with the top four.

Sainz finished right where he started, in fifth, with none of his rivals anywhere near him in either direction. Despite the Ferrari struggling to match the pace, Sainz made the Autódromo Hermanos Rodríguez look easy.

It was another poor start on race day for Lando Norris who dropped back to 10th before the first turn. However, Norris made the most out of the first stint on the medium compound tyres, before switching to the one-stop hard tyre strategy.

Like many on the hard compound, Norris struggled to bring them to temperature but managed to hold position despite attacks from drivers on the quicker soft compound. The 22-year-old cruised to a ninth-place finish, his sixth consecutive finish inside the points.

Fernando Alonso's race weekend got out to a great start with his 30-second penalty at the US Grand Prix being overturned, restoring his seventh-place finish.

It wasn't all smiles in Mexico for Alonso, however. Qualifying in ninth, it looked like another finish in the points before engine reliability issues caught up to him, forcing him out of the race with eight laps to go.

The ever-consistent Esteban Ocon continued his run of form finishing in the points for the 14th time for the 2022 season. The Frenchman looked comfortable despite having cooling issues for portions of the race and his eighth-place finish kept Alpine ahead of McLaren for another week despite Alonso retiring his car.

After a brilliant performance last weekend, Sebastian Vettel was just never quite there this weekend, failing to make it out of Q1 and only getting as high as 11th before stopping. The four-time World Champion couldn't quite get there no matter how much he tried to squeeze out of the Aston Martin.

If it weren't for Daniel Ricciardo, the Mexico City Grand Prix would have been a fairly boring race. But the Honey Badger threw down the gauntlet on lap 50, shunting Tsunoda off the track and earning a 10-second penalty for the offence.

Unbothered, Ricciardo made the last 20 laps look easy moving up from 11th to seventh, slicing through the Alpines, McLaren's constructors' rivals, without any difficulty shortly after the pair had to give way to Verstappen following the pair being shown blue flags.

The rivalry between Pierre Gasly and the stewards saw another round at the Mexico City Grand Prix when the stewards handed down a five-second penalty rather than forcing the Frenchman to give up track position to Stroll after a lock-up forced both of them off track.

After serving the penalty Gasly got himself close to the points once again, coming off the victor in the battle against Albon but just getting beaten out by Bottas in the final stint to the finish line.

After a 10-race streak out of the points, Valtteri Bottas finally finished inside the top 10 after what was an impressive weekend for the Alfa Romeo driver.

Putting together a solid lap in qualifying, Bottas split the Ferraris and managed to stick to the plan unbothered when both Alpines passed him in the opening stint. Bottas had a clean race to finish in 10th holding off Gasly and Albon.

Very much the victim of Ricciardo's attack for the points, there was very little Yuki Tsunoda did wrong this weekend despite the Alpha Tauri cars still having breaking troubles.

As a result, Tsunoda's begun an unfortunate streak DNFing in both of his appearances in Mexico, despite holding his position on the grid for the opening 50 laps.

No driver put up a better fight against Ricciardo than Zhou Guanyu in the opening laps of the Mexico City Grand Prix, the rookie driver holding off the Australian for a few laps and working the track before losing the position.

After that there was very little Zhou did wrong, the Alfa Romeo just didn't have the speed of the Alpha Tauris and Albon in the Williams, but kept a healthy distance between himself and the Aston Martin pair.

It was not a happy birthday weekend for Lance Stroll in Mexico. Still suffering the consequences of last weekend's crash, Stroll was relegated to the back of the grid. The Canadian got off to an impressive start rocketing five places up the grid in the opening turns.

However, the start was the highlight of his race, unhappy with his tires and getting pushed off the track by Gasly in one of the early battles he struggled ultimately crossing the line in 15th.

Starting all the way back in 17th it was a big performance from Alex Albon to drag his Williams car up to 12th at the line right behind Gasly. Making the most on a final stint on soft tyres Albon proved that on the right track a lot can be done with the Williams in the straights.

It was always going to be a difficult weekend for Kevin Magnussen and Haas at the Autódromo Hermanos Rodríguez, with Magnussen facing a five-place grid penalty and the car not being suited to the track. Ultimately it was somewhat of a nothing race from Magnussen, well ahead of Latifi but running a few seconds behind his teammate for a 17th-placed finish.

It just wasn't Mick Schumacher's weekend, suffering alongside his teammate Magnussen on the high downforce track that the Haas car doesn't favour.

Struggling to keep up with the pace of the rest of the field, Schumacher lost out to the Aston Martins in the opening laps, but the split strategy worked in his favour over Magnussen with the one-stop strategy keeping him ahead of his teammate.

The lone driver to be lapped by Verstappen, it was another 18th-place finish for Latifi at his final Grand Prix in Mexico, setting the slowest time in qualifying and having no pace on track.

The 27-year-old couldn't even make excuses for having less track time early in the weekend with Logan Sargent running in the free practice one session in Albon's car, giving Latifi more time to gather data than his Williams teammate.