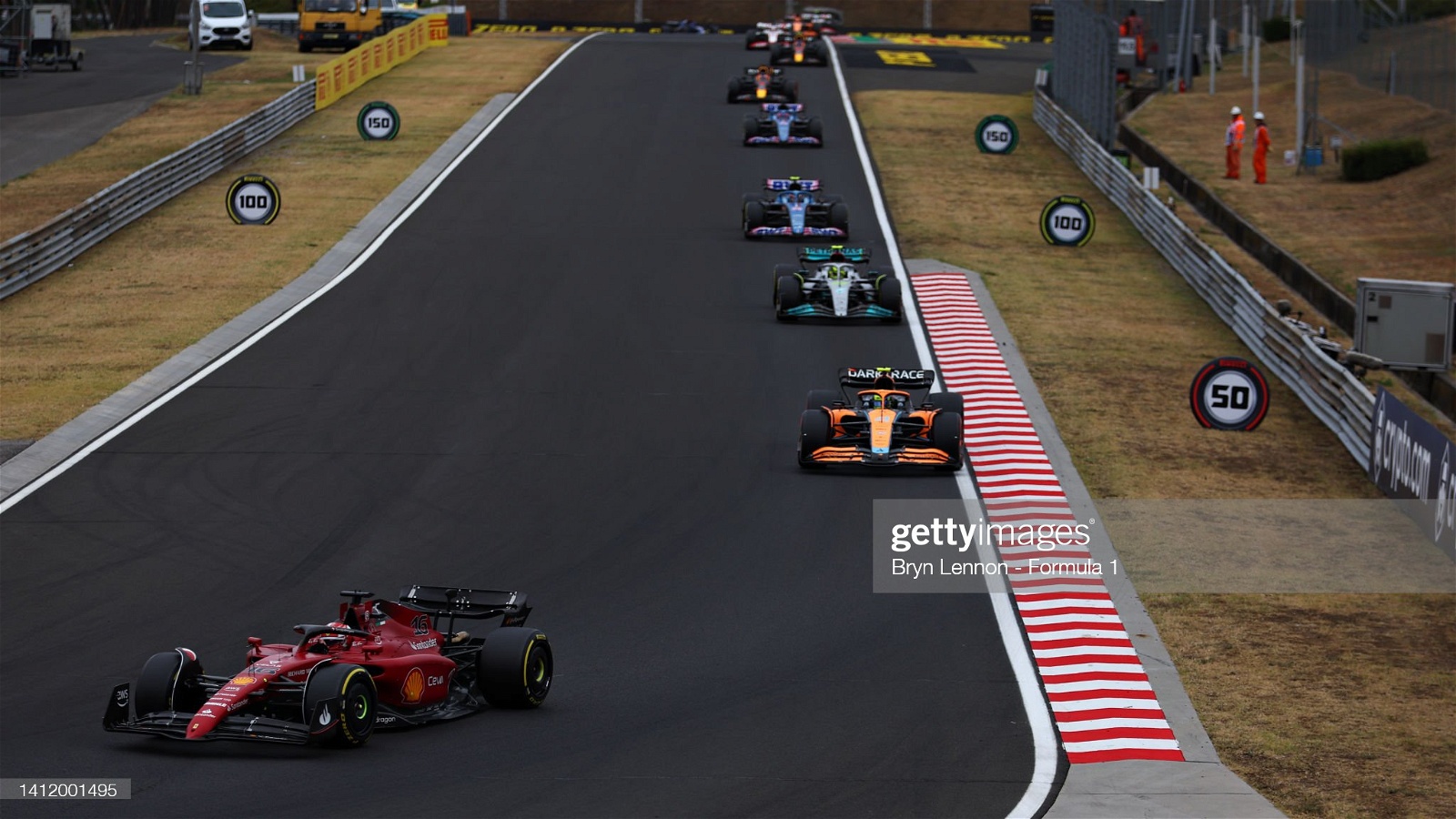 Formula One Power Rankings: The season so far

There's only nine races to go in Formula One 2022, how do your favourite drivers stack up?

Formula One Power Rankings: The season so far

There's only nine races to go in Formula One 2022, how do your favourite drivers stack up?

The Formula One 2022 season has shaped up to be predictable in so many ways, with Max Verstappen and Red Bull leading the championship despite Charles Leclerc's strong start to the season.

There's been moments to celebrate and moments we'd all like to forget when the season comes to a close. Before the Belgium Grand Prix gets underway, see how Edge of the Crowd has ranked your favourite drivers for the first 13 races of this season.

Despite an inconsistent start to the season, Max Verstappen has made the World Driver's championship his own with eight wins from 13 and a whopping 80-point lead over the next closest driver.

The 24-year-old could all but wrap up the championship this weekend with a win, with his rivals needing to not only be perfect but rely on multiple mistakes from Verstappen to hold on hope that they could take it down to the wire.

Mr Saturday has become Mr Consistent since stepping into the Mercedes garage, and it's kept the team in touching distance of the Ferraris this year. Finishing in the top five in all but one race this year.

Unfortunately, George Russell has been the bridesmaid of this season, coming close but unable to finish higher than third. However, the final two weekends before the summer break were proof that Russell is building towards his first win, putting it on pole in Hungary despite not having any purple sectors and nabbing a spot on the podium winning battles against Perez despite talk that Mercedes hasn't had the pace this year.

What could have been a dream season for Charles Leclerc has turned into a nightmare for him and Ferrari. Leclerc has been a stand-out on Saturdays, putting it on pole seven times this season.

With five podiums so far this season, there's been many questions as to why Leclerc and Ferrari have bled so many points week in and week out, be it through driver errors or bad team strategy. It will continue to be a talking point as the second half of the season develops.

The seven-time World Champion faced plenty of criticism at the start of the year, struggling to keep with the pace of his teammate and getting lapped by Verstappen at Imola, but since then, Lewis Hamilton has started to get control of the new Mercedes car.

In the final weeks before the summer break, Hamilton finally found the form fans are familiar with, finishing on the podium in five races. Hamilton is still yet to get a win in 2022, and if he can't convert the form prior to the break into a win, it will be the first season of his Formula One career without one.

If Leclerc's season has been knocked off course because of errors and strategy, than Carlos Sainz's success this season has come despite the team. At Silverstone, Sainz finally earned his first win, ignoring team orders to defend on Leclerc's behalf at the end of a safety car.

If it weren't for retiring out of races early in the season, with Sainz getting caught in the gravel pit on more than one occasion, he'd be looking more comfortable having not fallen out of the top five in any of the ten races he has finished.

Sergio Perez's start to his second season at Red Bull made up for some of the points Verstappen lost due to reliability issues early on, keeping Red Bull in lockstep with Ferrari; Perez then went on to win the Monaco Grand Prix, notching his third career win.

However, as Formula One entered the mid-season Perez's form has started to dip, losing out to Russell and Hamilton, and relying on Ferrari's mistakes to stay ahead of them.

Tipped to be the best of the rest in 2022, Lando Norris has secured that spot from the midfield drivers this season. The lone driver that isn't in the top three teams to finish on the podium this season, Norris sits comfortably in seventh, so much so that he's finished in seventh four times this season.

With a reliable engine and upgrades on the car, the question is whether Norris can close the gap on the top six and potentially earn the first win of his career.

No longer satisfied with just scraping into the points, Esteban Ocon has tried to make the most out of this season so far, and in Alpine's midfield battle with McLaren, he's been a critical piece to the puzzle.

In the battle between the Alpine drivers, Ocon has come away the victor eight times this season and has shown his strength is in racing conditions, struggling in qualifying on Saturdays.

Fernando Alonso didn't have the start he would have hoped for this season, but he's found his footing and has had flashes of brilliance. That brilliance was on show during qualifying at Silverstone, where Alonso qualified on the front row.

If Ocon has struggled on Saturdays, then it's been where Alonso has stood out, qualifying ahead of his teammate eight times this season; it's often the starts where Alonso comes unstuck, dropping a place or two on the start and having to fight for the whole race to get them back from the likes of the McLaren drivers.

Starting the season with a fifth-place finish, Haas is back in safe hands with Kevin Magnussen, putting on performances akin to his 2018 season.

Magnussen has been one of the few drivers who has looked more comfortable during the sprint weekends, having two of his top qualifying performances during Friday qualifying and earning points in both the sprint and the race.

The 2022 season hasn't looked as good for Valtteri Bottas as years gone by; no longer in a Mercedes seat, it was a shock to see him battling with Hamilton and Russell in the early races this season. However, as the season has developed, the car hasn't been up to the task.

By no means has Bottas been perfect this year, but the reliability issues of the Alfa Romeo have held him back from properly taking on the other midfield teams.

We now know that Daniel Ricciardo won't be racing at McLaren next year, but before the chaos of the silly season, the Australian wasn't having a stellar season, to begin with. Outperformed by his teammate in most races this season, questions about Ricciardo's compatibility with the car have loomed.

Often held up behind his teammate early in the races this season, under team orders, Ricciardo might need to challenge team orders if he's to put himself in contention to finish in the points when his pace drops later in the race.

After a rough rookie season, Mick Schumacher's 2022 has been something else, from disastrous moments like his crashes in Monaco and Canada to earning points for the first time in his career.

Schumacher's shining moments so far came in the battles in the races, holding his own against both Hamilton and Verstappen in successive weeks, hinting at what might come if his career in F1 continues.

Pierre Gasly got off to a solid start in the 2022 Formula One season, securing an eighth and ninth place finish in Saudi Arabia and Australia, respectively, however it hasn't been smooth sailing since then.

Of the next ten races Gasly has only finished in the points once, finishing in fifth in Baku. The 26-year-old has outperformed his teammate in eight races this season. It has started to perform more consistently in the final races ahead of the summer break, potentially setting himself up for a better second half of the season.

Four-time World Champion Sebastian Vettel started his final season in Formula one on a low, missing the first two races of the season due to Covid and retiring the car in Australia; Vettel could only go up.

From the next ten races the German has finished inside the points in five and out qualifying his teammate eight times this season.

Surprisingly consistent in 2022 Lance Stroll has finished between 10th and 15th in all but one race, the only race he did not finish.

Stroll has also scored points in four of the 13 races, holding off his teammate Vettel, who hoped to make a late pass and fight Ricciardo in Hungary.

Finishing in the points in three of the first six races, Yuki Tsunoda looked set to back up his rookie season with an even better year; however, after the Spanish Grand Prix, there hasn't been anything to write home about from the 22-year-old.

Tsunoda's looked cleaner in qualifying in the final two races of this season but has been unable to covert or advance up the grid at race pace, spinning out in Hungary and catapulting himself down to last place, stuck at the back of the pack for the remainder of the race.

After a year out of Formula One, Alex Albon has adjusted well to the Williams team, outperforming his teammate in all but one race that they've both finished in.

Albon was also responsible for one of the more entertaining moments of the 2022 season, staying out on hard compound tyres for 57 laps of the Australian Grand Prix before pitting on the final lap, earning Williams its first points of the season.

There aren't many drivers who have been more unlucky in their rookie season than Zhou Guanyu; the 23-year-old has been the victim of Alfa Romeo's reliability issues on more than one occasion.

Zhou's shown promise this season, finishing inside the points twice this year; however, with five dnfs for the season, there's only so much the rookie has been able to showcase.

Ranked 21st out of 20 drivers for more weeks than anyone would care to admit, Nicholas Latifi is the lone driver on the grid not to finish inside the points this season.

Latifi's best finish this year came at Silverstone, where he finished in 12th but Formula One fans were delighted to see the driver top a free practice session in the wet in Hungary.