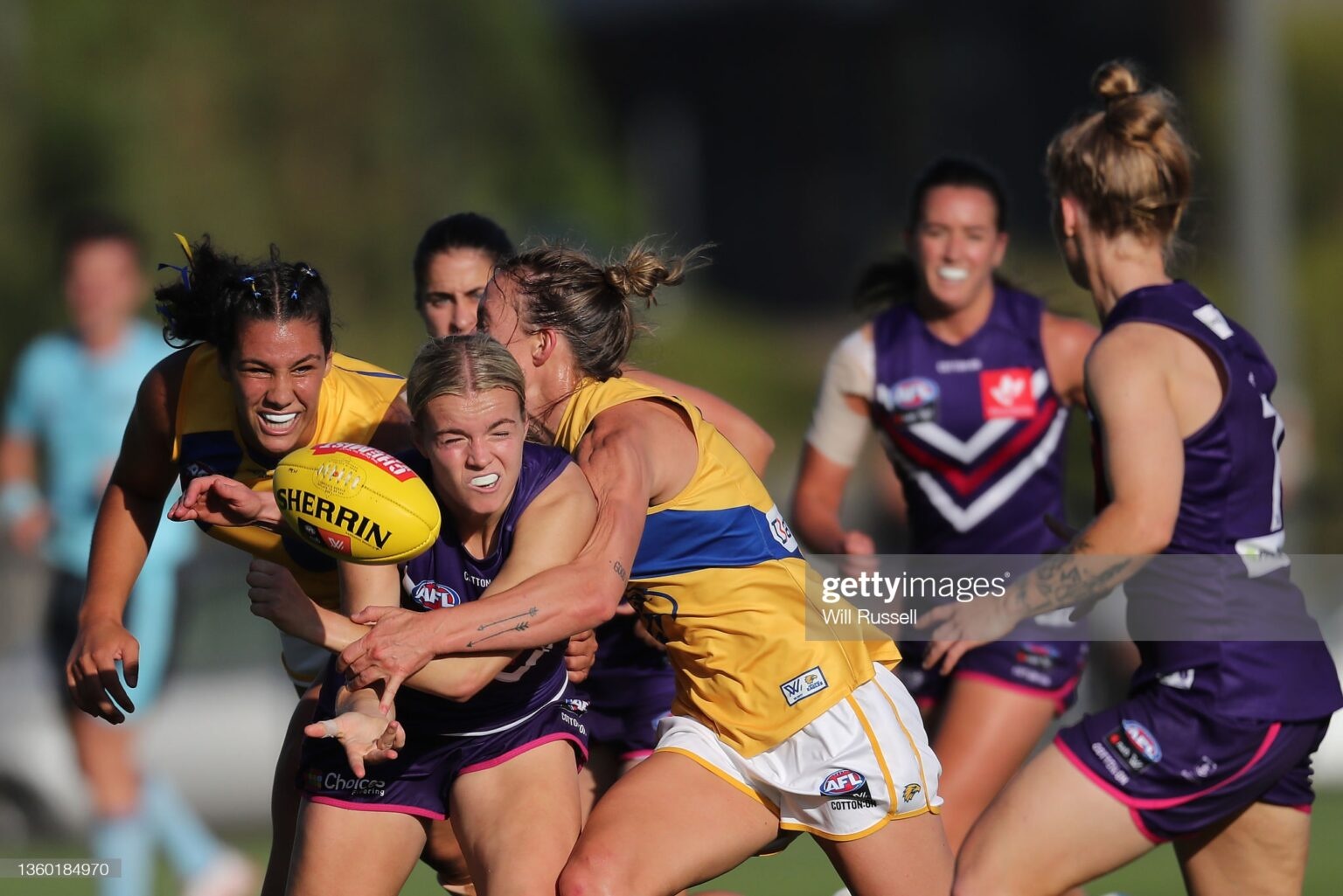 Five things we learned from the AFLW pre-season derby

As dusk hit Cockburn, a confident West Coast side recorded its first win over Fremantle. Here are five things we learned from the AFLW pre-season derby.

Five things we learned from the AFLW pre-season derby

As dusk hit Cockburn, a confident West Coast side recorded its first win over Fremantle. Here are five things we learned from the AFLW pre-season derby.

As dusk hit Cockburn, the West Coast Eagles recorded its first victory against the Fremantle Dockers during an AFLW pre-season derby hit out.

In previous meetings, Fremantle has dominated West Coast, but tonight was a different story. Instead, a more confident, uncompromising West Coast outfit took the field to overcome its purple-clad rivals by nine points.

Here are five things we learned from the AFLW pre-season derby.

West Coast has struggled to find stability in the coaching department for the first three years, with a new coach each season. However, this hasn't left the Eagles shaken, rather they looked as confident and cohesive as ever.

Last season, West Coast's intent was evident, but disposal efficiency and skill execution was an area needing focus. It impacted the overall ability to maintain possession and play with control.

Michael Prior, who took over from Daniel Pratt, looks to have stuck with and polished his predecessor's game plan in the pre-season.

Once the players had ball in hand, they moved it energetically, decisively, and accurately by both hand and foot. This contributed to an almost faultless first-quarter performance, as it enabled play to stay in West Coast's forward half.

Additionally, the players brought immense tackling pressure, which seemed to have caught the Dockers off guard at times.

Overall, it was a good sign from West Coast as they hope to close the gap between themselves and the competition in 2022.

Dana Hookertook the field for the first time since her season-ending injury last season, spending her time in a new role.

A full-strength West Coast midfield as seen tonight is undeniably robust, which enables Prior to experiment with positioning. One experiment saw Hooker providing experience and composure behind the ball in the half-back line.

With former DockerEvie GoochandBelinda Smithsupporting her, she was able to thwart attacks and set up chains of play going forward.

Whether this move is permanent or not, Prior at least now knows the All-Australian midfielder is an option if they need an extra player in defense.

This evening a handful of players took the field as AFLW players for the first time, looking to impress their respective clubs.

And so they did, as they delivered all they promised and showed back in July when they were drafted.

The Subiaco product impressed in her first game back since her wrist injury which sidelined her for almost a year.

She secured the first clearance of the game, which led to the first major, kicked byAndrea Gilmore. Moments later, Thomas found the ball on the boundary inside 50 and snapped it to bag a goal of her own.

Also from West Coast,Courtney Rowleyworked her way into the contest as veteran bodies were rested, whileEmily Bennettthwarted a critical inside 50 entry from Fremantle in the dying minutes of the game.

Fremantle will need to fill several holes as it enters 2022 withoutSabreena DuffyandAshley Sharp.

While we can't gauge how much their absence will be felt by Fremantle, it cannot be ignored. Both players are influential on the scoreboard and provide crucial connection within the forward line, and with the midfielders.

Fremantle struggled to score, partially due to inaccuracy (3.5), but mostly because of a loss of connection among the forwards. Additionally, the chemistry between the forwards and mids dwindled.

Coach Trent Cooper also stated acquiring more midfield depth was an off-season focus of Fremantle's as it bowed out in finals last season.

Kiara Bowerswas phenomenal as expected, laying three tackles in the first three minutes of the game. However, it cannot be a one-woman show.

With needs becoming demands, a quartet of players is likely candidates to fill these gaps and play those roles.Bianca Webbkicked a goal was hitting plenty of contests hard, as was drafteeDana EastandAnn McMahon.Mikayla Morrisonalso burst to life in the last few minutes, also putting her hand up for this potential role.

West Coast has had three glaring issues over the past few years regarding their list. These include limited ruck support forParris Laurie, a key target up forward, and leadership down back.

Over the off-season, West Coast seems to have recruited effectively to find solutions for issues across the three lines.

Against her old side,Evie Goochprovided leadership down back for West Coast, providing composure and effective ball movement.

For two years, Laurie has had little support in the ruck, however, she may finally have some this season and beyond. First-yearSarah Lakayheld her own in battles against Mim Strom and was often able to win these contests too.