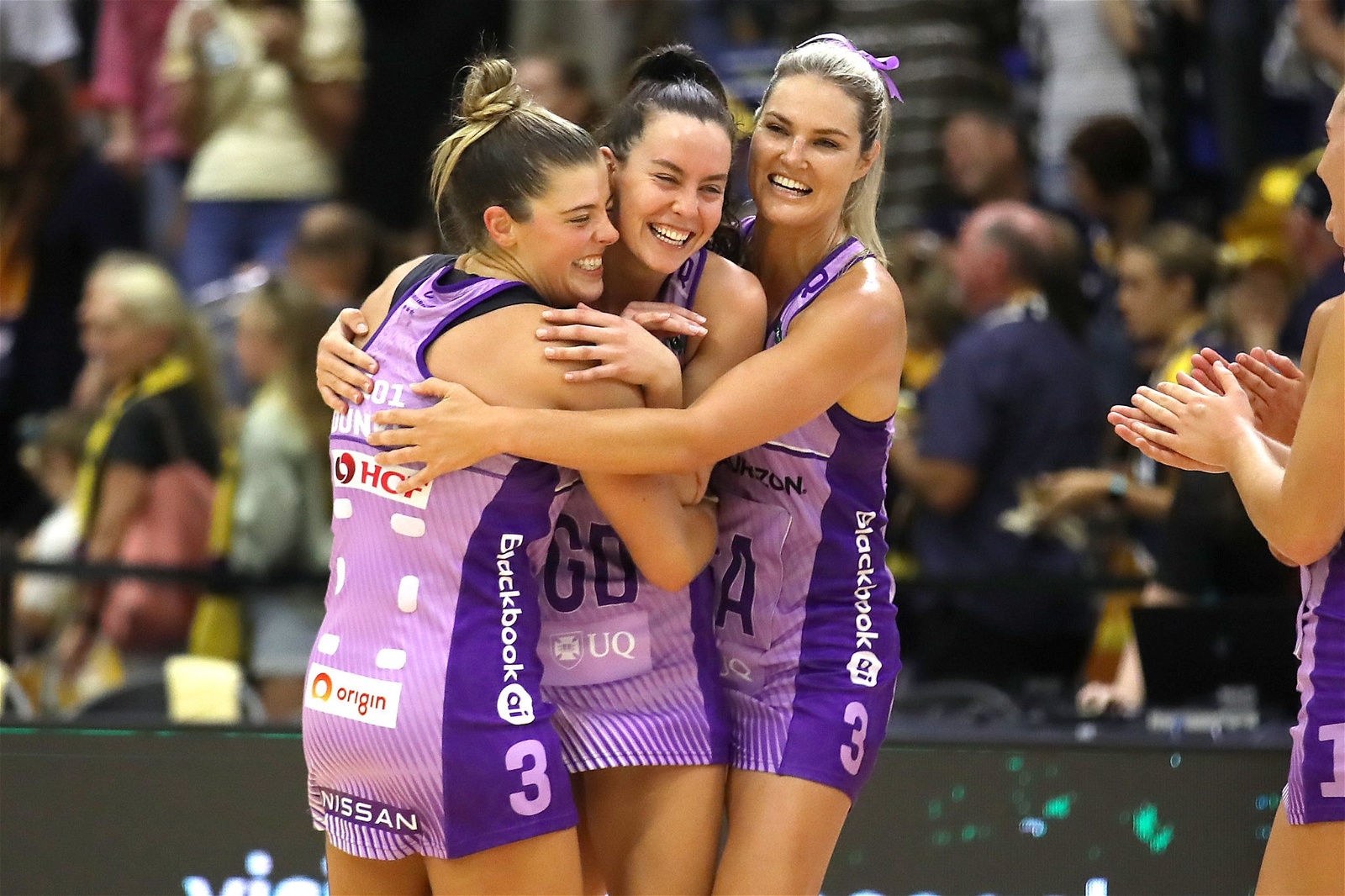 After last week’s recording-breaking loss to the Fever, the Lightning were looking to prove themselves against the Firebirds. Unfortunately, today was not their day.

USC Stadium was hosting the Queensland Derby, with fans from both teams keen to see what their team had to offer. The pair met once in this year’s Team Girls Cup, with the Lightning walking away with a five-point lead.

Unlike some of their counterparts, Firebirds were playing Round Two with their full team, managing to keep COVID-19 away for another week.

The Lightning almost escaped unscathed, with captain Steph Wood ruled out due to COVID protocols, just hours before the game. Annie Lawrie was named as her replacement, with Laura Scherian stepping into the role of captain.

For the first six minutes, things were neck and neck before a Tara Hinchliffe intercept had the Lightning up by two. Today’s game was Hinchliffe’s first against her old team, after signing with the Firebirds in 2018.

Once again Donnell Wallam was on fire, making an intercept before sinking a Supershot. Thanks to another Supershot and the efforts of teammate Gretel Bueta, the Firebirds led the first quarter 18 -17.

In the first HCF timeout of the game, Kylee Byrne made some positional changes for the Lightning. Koenen and Batcheldor switched positions, putting the rookie against international powerhouse Eboni Usoro-Brown. Usoro-Brown had been playing a physical game against Koenen and continued to do so against Batcheldor.

On the other end of the court, Wallam was giving defender Kadie-Ann Dehaney some grief, seemingly unphased by her presence. Gretel Bueta was also having a field day, feeding the ball to Wallam with ease.

The Firebirds dominated the first ten minutes of the second quarter, scoring 14 to the Lightning’s seven. After another Lightning timeout, Kate Walsh replaced Maddie Hinchliffe at wing defence. The Firebirds’ lineup continued to remain unchanged.

As the quarter continued, Ruby Bakewell-Doran continued to get amongst the Lightning circle. By halftime she had eight deflections, contributing to her 54.5 Nissan Net Points.

“She’s got such a huge presence, her voice is fantastic. She’s got so much experience so she’s been really settling for me out on court.”

This emerging duo is looking so powerful on court, giving the Lightning a real headache.

Despite having possession during 48 per cent of the half, the Lightning were 14 behind, after a 22 to nine-goal quarter. The Firebirds had cut down on their penalties from last week, sitting at 16 with the Lightning at 35.

The third quarter saw a steady stream of goals by both teams, but the Lightning needed to start making some moves if they were going to get anywhere near the Firebirds' score.

Although Koenen and Batcheldor were generally comfortable with long-range shooting, they had only attempted three Supershots before the final minutes of quarter three.

Wallam was almost taunting Lightning fans, sinking two Supershots in a row – not that she needed to!

At the other end, Batcheldor was having difficulty making the Supershots, despite her best efforts. If there was a time in the game the Lightning really needed Wood, it was at this point.

With a 20 point lead to the Firebirds, it was clearly over for the Lightning. They still had a quarter to win, and a margin to close, but the overall win would not be theirs. On the other hand, this thrashing was an incredible confidence boost for the Firebirds cohort after last week’s loss.

The Firebirds weren’t letting the Lightning have a little win, continuing to rack up the points. In fact, their fourth quarter was their highest-scoring, with 23 points. Finishing the game 82 - 54, the Firebirds equalled the Fever's record set last week against the Lightning.

In her second SSN game, 19-year-old Reilly Batcheldor had Wood’s shoes to fill. In last week’s game, Batcheldor was unable to make her mark in the game but saw improvement against the Firebirds. In the final minutes of today's game, Batcheldor even managed to sink some Supershots, totally three over the game.

Ruby Bakewell-Doran was named player of the match, playing three of the four quarters. Bakewell-Doran’s stats were stellar, with nine deflections and 67 Nissan Net Points.

"Ruby had an excellent game today, she really worked the goal attack so hard. We were able to make up some balls nice and early and I think we just built from there. She's a really good kid, so it's so nice to see her do so well."

Both teams will play next Sunday, with the Firebirds starting off against the Fever. Immediately after the Lightning will take on the Thunderbirds in Adelaide.