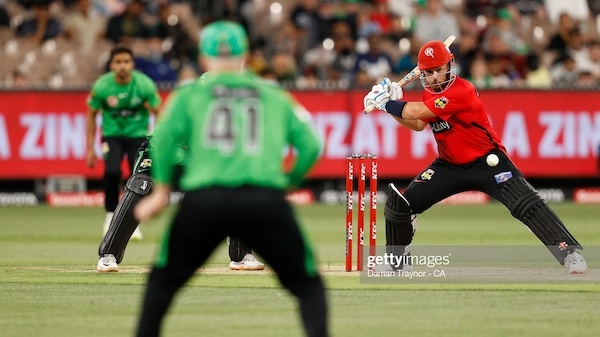 Finch fires for Renegades in win over Star-less Stars

A half-century from Aaron Finch helped the Renegades take bragging rights over a depleted Stars in the Melbourne Derby, securing the men in red their second win of the tournament.

Finch fires for Renegades in win over Star-less Stars

A half-century from Aaron Finch helped the Renegades take bragging rights over a depleted Stars in the Melbourne Derby, securing the men in red their second win of the tournament.

The Renegades have taken bragging rights, defeating a depleted Stars line up by five wickets in the Melbourne Derby to get their second win of the tournament, seven matches after their first.

The match was not without its drama, as we've come to expect this BBL season, with two further Melbourne Stars players testing positive to COVID-19 prior to the match (Joe Clarke and Tom J Rogers). This takes the total number of Stars' players out with the virus to 12.

Pakistan quick Ahmad Daniyal debuted for the Stars, while Travis Dean returned to the Stars playing XI as a top up player.

In the Renegades' camp, James Pattinson was ruled out after a delay in his PCR result, while they made two other changes with Shaun Marsh and skipper Nic Maddinson returning to their XI.

Speaking of Marsh's return during the broadcast, Aaron Finch said it's great to have the batter back.

"He's an ubelievable player and somebody who brings a lot of stability to this side and we've seen the impact that he has had over the years for the Perth Scorchers, before he came to us.

"He's ability to bat long, long innings and put pressure on oppositions... is underrated in T20 competition. He's someone who does it better than anyone."

New opening batting combination Travis Dean and Justin Avendano headed out to the crease for the Stars, after they won the toss and elected to bat.

In his 50th game in the Renegades' Red, wicketkeeper Sam Harper took the catch that dismissed Charlie Wakim, and secured Maddinson his second wicket in a haul of three for the night.

Richardson, also in his 50th match for the Renegades, took three wickets - Tom O'Connell, Qais Ahmad and Brody Couch - his pace seeing both O'Connell and Qais mis-time the drive and pick out the fielder in Marsh at cover.

Reece Topley chimed in to claim the final wickets, to clean up the tail and finished with three for the night.

Hilton Cartwright top-scored with 41 runs, but the decimated Stars line up was bowled out on the final delivery for 126 runs.

The Big Bash is at the half-way point. How are the teams doing?

Edge of the Crowd's BBL predictions

Harper and Finch opened the batting for the Renegades, but Harper departed early for seven. Qais got the breakthrough as Patrick Rowe, the fill in wicketkeeper juggled the ball and yet still had plenty of time to take the bails.

On return, Marsh was the next batter to the middle for the Renegades, and got into the run-making immediately.

The Stars could not break the Finch-Marsh partnership, and struggled to bowl tight enough to stop the flow of runs off the Renegades' bats.

On debut, Daniyal secured his first wicket - Marsh attempted to pop one around the corner for a couple of quick runs, but it picked out the fielder in Couch, running in from the boundary.

Finch brought up his half-century, an important knock from the ex-captain to get the Renegades four points and lift the side for the back-half of the season.

Things took a turn for the Renegades as Maddinson was sent packing, trapped lbw by Tom O'Connell. In the same over, Finch mis-timed a slog and was caught on the boundary rope.

After much deliberation by the third umpire, the catch was confirmed and Haris Rauf sent Aaron Finch back to the dugout.

Rauf then took the ball and, with his second delivery, bowled right through Mohammad Nabi, lighting up the stumps and giving the Stars the slightest chance with the Renegades 5/92.

X-Factor substitute James Seymour joined Mackenzie Harvey at the crease and the pair started to put a partnership together to guide the no-longer bottom of the ladder Renegades to victory.

Some nice shot-making from Harvey and Seymour excited the Victorian crowd, as they powered to the win with two overs to spare.

Chris Rogers, the Stars acting Head Coach, said during the broadcast that he thought the early players diagnosed should be back for their next clash in Adelaide.

TheRenegades will head down the highway to host the Heat in Geelong on Thursday,while the Stars will be back in action on Friday night against the Strikers, hopefully without further cases.