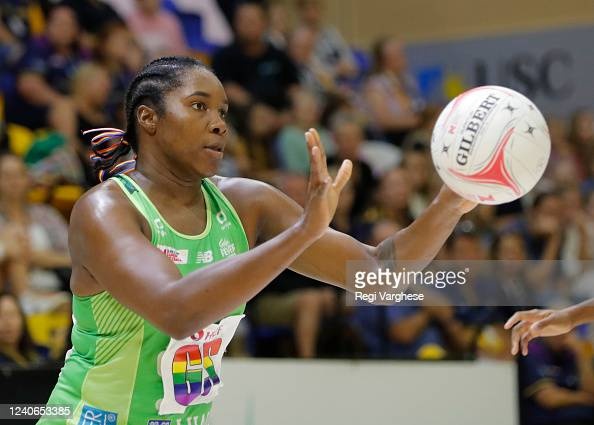 After their huge loss to the Fever earlier in the season, the Lightning aimed to save their season in their Pride Match, but went down 82-63.

After their huge loss to the Fever earlier in the season, the Lightning aimed to save their season in their Pride Match, but went down 82-63.

The West Coast Fever took on the Sunshine Coast Lightning in the first Pride Match of 2022,ending the game with a nine-point lead.

Earlier in the season, the Lightning were obliterated by the Fever, 82-63. If the Lightning went down again today, they would be on a losing streak of three, likely keeping them at the bottom of the ladder.

Last week Zoe Cransburg joined the Fever squad for the injured Jess Antiss, but was replaced by Chelsea Pitman for today’s game. For the Lightning, Laura Scherian was out due to COVID-19 protocols, with Jada Gafa coming in to make her debut.

This game was the pair’s inaugural Pride Match, with players wearing rainbow bibs and shoelaces. Last season, the Queensland Firebirds and Collingwood Magpies held the only Pride Match, making this the second Pride Match in the history of SSN.

West Coast Fever’s Stacey Francis-Bayman spoke about the match earlier in the week, saying, “I think to have the Pride Match between Fever and Lightning is incredibly important.

“I think visibility is a real key part to play and to be able to step on court and to have my full authenticity on show and the pride colours on the court and on the bibs is really exciting.”

The West Coast Fever kicked the game off seeming calm and comfortable on the Lightning’s home court. Kate Walsh and Tara Hinchliffe tried their best to stick on Jhaniele Fowler in an attempt to minimise a point-scoring frenzy.

It was the Fever who broke away first, putting space between the teams early on. The defensive pressure in the Fever mid-court was intense, forcing the Lightning to slow their play dramatically.

After a Lightning time-out with seven minutes to go, the team was still struggling to make it through the Fever defence. At the opposite end, the Fever were getting the ball from centre to hoop with minimal issues. Come super shot time, Steph Wood made two back-to-back super shots, equalising the score.

With 15 seconds to go, Wood made her third attempt, ending the quarter 19-18.

Although the Lightning started off with the ball in the second quarter, the Fever got two early turnovers that put them ahead once again.

Four minutes in and the Lightning were four down, prompting a time out. During their huddle, Lightning coach Kylee Byrne was clear, “You cannot let this get away. Because you are in this and you’ve worked too hard.”

Nothing much changed over the next five minutes, the difference in score now six to the Fever. The Fever called a tactical time out, talking tactics for the super shot period.

It was time for Fowler’s Jamaican teammate to come on court; Kadie-Ann Dehaney replaced Tara Hinchliffe as goal keeper, in an attempt to stop her dominance.

With a significant amount of turnovers, the score was starting to blow out, now 10 points. Emma Cosh took her chance to attempt her second super shot, this time sinking it. At the other end, Wood did the same, putting the scores at 30-40 for half-time.

For the third quarter, Steph Wood came into wing attack, with Reilley Batcheldor in at goal shooter and Koenen moving into goal attack. Halfway through the quarter and the point difference was unchanged. Following a Fever timeout, Pitman was replaced by Alice Teague-Neeld and Cosh by Sasha Glasgow.

The Lightning started to gain some momentum, closing the gap to three points thanks to a Batcheldor super shot. It was time for the crowd to get behind the team, willing them on during this hot quarter. With another Batcheldor super shot, it was Glasgow’s turn to give it a go, with Tara Hinchliffe and Dehaney shaking her confidence, the Fever stuck with the one.

In the final minutes, the Fever had a short run putting them up seven by the end of the quarter. If the teams were point for point once again, the win may rest on the shoulders of the Lightning’s super shot duo.

For the final quarter, Sunday Aryang and Francis-Bayman swapped positions, with Aryang in at wing defence from goal defence. Once again, the scores were 10 points apart, prompting a tactical time out from the Lightning. During the time out there were multiple mini huddles, discussing improvements in all areas.

With a few turnovers, the difference was now six. It was the Fever’s turn for a time out, with Fever coach Dan Ryan telling his team, “we have scoreboard pressure, we have ownership.

“We’re not going to keep opening the door three times in a row. Make the choice right now to be the one that slams it shut.”

The stadium was buzzing, but the Fever were still standing strong. With two turnovers, they were able to pull away. Batcheldor responded with a super shot, but with three minutes to go, the Lightning needed back-to-back super shots. It was in the heat of these final minutes that Gafa made her Sunshine Coast Lightning debut at centre.

Despite their best efforts, the Lightning couldn’t close the gap, with unsuccessful super shots and forced one-point goals. The Fever walked away with a nine-point win, returning home after a third win in-a-row.

Fowler was named player of the match, scoring 66 from 66, 89 per cent of the Fever’s points. Post-match, she commented on the Lightning’s defence, particularly Dehaney, “as much as she knows me, I know her, so making sure I’m working to my strength and her weakness.”

The Lightning will play at USC Stadium again on Tuesday, against the Swifts, who are similarly ranked this season. The Fever will also play on Tuesday, hosting the Vixens at RAC Arena.