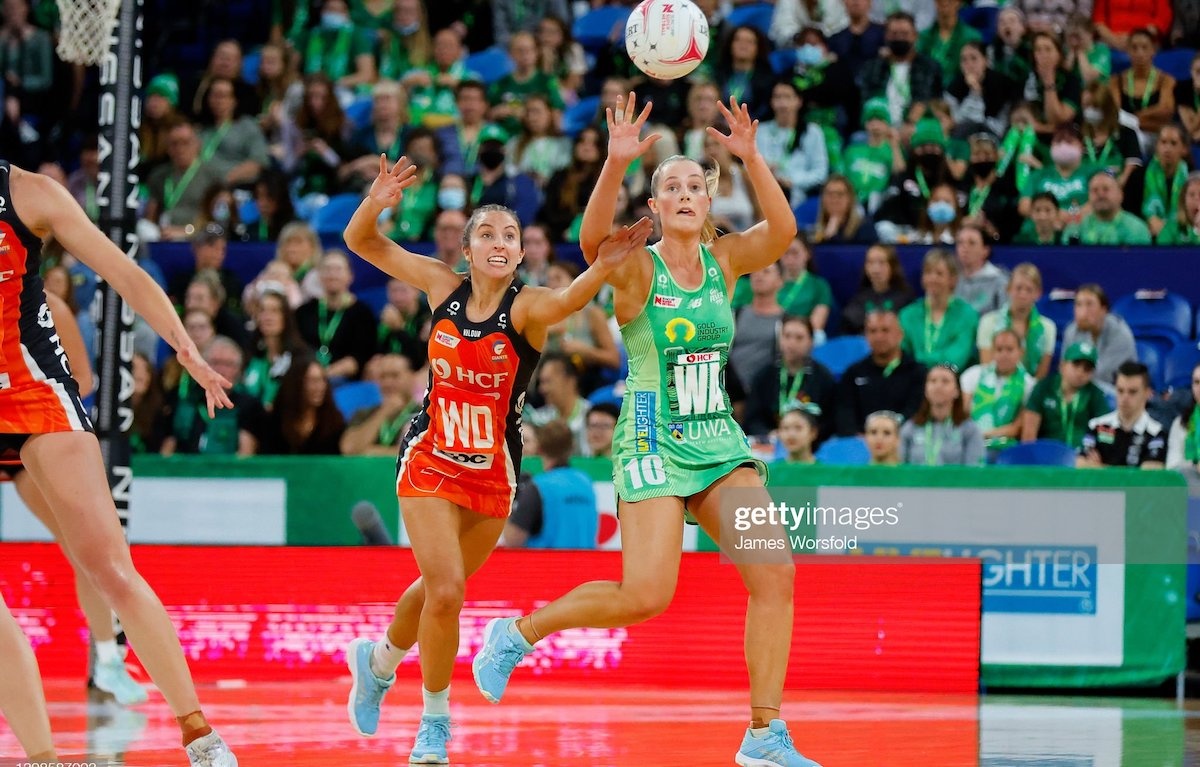 Fever fire up for Giants win despite missing key players

The West Coast Fever have set a new high score in the Super Netball super shot era, with an 86-77 win over Giants Netball.

Fever fire up for Giants win despite missing key players

The West Coast Fever have set a new high score in the Super Netball super shot era, with an 86-77 win over Giants Netball.

The West Coast Fever have set a new high score in the Super Netball super shot era, with an 86-77 win over Giants Netball at RAC Arena on Sunday afternoon.

It was a high-scoring affair all afternoon in Perth, with at least one side scoring 20+ goals in each quarter, but the Fever's strengths in the second and third quarters saw them pull away to a lead not even the Giants' super shots could scale back.

Speaking to media following the strong performance in front of the home crowd, Fever coach Dan Ryan was happy and proud of the group's resilience given their outs.

"Incredibly proud of the group and it probably has to be our most significant performance, I think.

"Particularly this season, there's no question about that, and to have so much chaos even before the game with Sunday (Aryang) being ruled out and the injuries that we've had, and the other covid cases, and to pull Shannon from further beyond our extended squad to fill a starting seven position today.

"A really gutsy win from the group and incredibly proud, considering what happened, I guess, on Tuesday night and the honest and tough conversations we had afterwards, leading into today.

"But that says a lot about my team, and I'm so proud that they responded the way they did, all things considered."

Opposition coach Julie Fitzgerald was, too, impressed by the Fever's match, commenting on their "almost perfect" game to Giants media post-match.

"I think firstly, I want to pay credit to the Fever, they played an almost perfect game today and it was very difficult for us to stop the ball getting down to Jhaniele (Fowler).

"But, having said that, we had opportunities that we wasted, and we'll have a really good look at that and make sure that we can tidy that up in the future.

"We certainly had errors that we shouldn't have made, and we had balls we should have been able to turn over, but their attacking end was absolutely on song."

The Fever were without vice-captain Jess Anstiss, who missed again through foot injury, and Rudi Ellis, out with COVID-19. Sunday Aryang was then named a late out due to COVID-19 protocols on match-day. Training partners Chelsea Pitman, Zoe Cransberg and Shannon Eagland were all in the squad for the clash with the Giants.

It was a tight tussle to start the quarter, bodies immediately thrown around, attacking the game ferociously, like this contest always is.

Giants' goal shooter Jo Harten collided hard with the post, her back taking a big hit, though she continued without issue.

The Giants called a time-out as the Fever took the lead with three in a row, but couldn't come up with answers immediately as the lead grew again with another three goal stretch.

Going into the first Power Five Fever led by four, but it took Sophie Dwyer just two attempts at the super shot to draw the scores back level.

Ryan was forced into a tactical time-out, who asked his group to fire-up for the last four minutes of the opening term. Verity Simmons responded to this challenge immediately, taking a crucial intercept in the defensive third, and the Fever stuck with one-pointers to re-gain the lead.

A high scoring opening quarter had the scoreline 23-21 to the home side, and that only grew in the second.

The Fever pulled away through the next 15 minutes of play, a three goal run in the middle of the quarter, and again at the start of the Power Five period with a Sasha Glasgow super shot and two one-pointers to Jhaniele Fowler, saw the lead pull out to nine at the main break.

There was a shuffle in the Giants' defence that saw Lauren Moore come on at goal defence, April Brandley move back into goal keeper, send Tilly McDonnell to the bench half-way through the second, but it didn't bring the answers the Giants' were looking for.

On the broadcast, Ryan thought it was possibly the Fever's best first 30 minutes of netball for the season and was loving what he was seeing from Eagland in wing defence.

Amy Sligar came back into the match for the third quarter, but the Giant woes continued for the travelling side, as frustration caused turnovers and a lack of cohesion among the seven on court. Seven minutes in, Hay returned to the court and the margin came back in from 14 to 12, but the Fever responded after their own tactical time-out.

Three super shots from the Giants duo of Dwyer and Harten pulled the deficit in to 10, but again, a response from the Fever was quick as Glasgow sunk her own.

Hay received further attention from the physio after leaving the court late in the third, Sligar again taking her place.

Simmons at centre was back running the show on Sunday, after having a quieter night against the Vixens mid-week, with her speed and ability to hold the mid-structure causing problems for the Giants.

Ryan spoke on her battle with her opposition centre Jamie-Lee Price post-match.

"She used her strengths really well, she didn't get caught too much in a battle defensively, she knew that was going to be the tough area of the court for her, considering [Jamie-Lee Price's] strength and stature when she's in that forward line.

"But I thought Verity's attack, in terms of getting some depth and getting the speed going, which she does better than most, was exceptional today, and it allowed her to get confident and when she's confident, she can do anything.

"So, really pleased for her, she's had a rough couple of games in terms of minutes on court with no respite and back up centre so to speak, so she'll love that one today, and we're really proud of her."

Harten and Dwyer took the ball in the super shot ring with a turn and shoot mentality, which saw them sink four in a row without reply from the Fever. The patch was some of the Giants' most energised play of the day.

The Fever hit back, with Fowler's goal breaking the record for the highest score of the Super Netball super shot era, as 82 clicked over to 83.

With their focus firmly on the margin, given the closeness of the ladder and likeliness that percentage will play a role, the Giants continued on their super shot roll with another two to Harten, who finished with nine.

Fitzgerald noted this after the game, saying how vital reducing that deficit was for their hopes of playing finals.

"It eased the pain from a percentage point of view as well, obviously that's vital to us, as it is to so many teams at the moment."

Fowler finished it with a super shot, for a nine point win to the Fever, 86-77.

So where was it all different for the Fever today, compared to the mid-week disappointment against the Vixens? Ryan said the start from his side was so much better today and he was really proud of the early accountability.

"The start, and the full accountability for how hard you have to work early in a game," is where the difference was Ryan said.

"There's no such thing as a slow burn in Super Netball, you need to be on it from the very first whistle and the willingness to go diving deep to find an extra gear, because Vixens out-muscled us, they out-played us early, and we knew that if we didn't start like we did today, Giants had the ability to do the exact same.

"So, the work rate and the work ethic critically important in terms of our behaviours on the court."

While it wasn't enough on Sunday, the Giants also acknowledge that a 77 goal performance wasn't all bad and would win many other games this year.

"You think 77 goals and we've lost by nine, it's kind of hard to juggle in some ways, but as I said full credit to Fever, their attack was amazing tonight.

One player that Fitzgerald was especially pleased with, and thought brought the energy and intensity for the whole 60 minutes, was Amy Parmenter.

The wing defence finished with three deflections and two intercepts for the game and tried her best to slow the ball going into Fowler.

"I thought she (Amy Parmenter) kept us in the game in the third quarter, she got some crucial ball for us, and she certainly put in the effort for the whole game."

The West Coast Fever will remain at home in Round 12, hosting the Queensland Firebirds, while Giants Netball will return to Sydney for a clash with the Adelaide Thunderbirds.