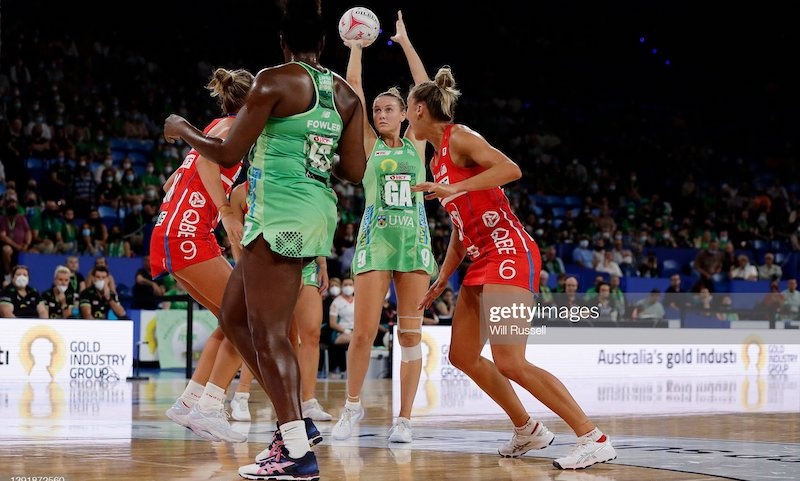 Fever finish off Swifts after first half grind

Not even a super shot haul by Helen Housby could get the NSW Swifts over the line in Perth, West Coast Fever tidying the reigning premiers up, 76-58.

Fever finish off Swifts after first half grind

Not even a super shot haul by Helen Housby could get the NSW Swifts over the line in Perth, West Coast Fever tidying the reigning premiers up, 76-58.

Not even a record-equalling super shot haul from Helen Housby could get the NSW Swifts over the line in Perth, West Coast Fever tidying the reigning premiers up, 76-58.

Housby drained 10 super shots, including four in the opening quarter, but her accuracy dropped off in the second half to end 63 per cent for the match.

The Fever "had to work really damn hard" in the second half to grind out a tough, but solid win, said coach Dan Ryan.

"It was certainly a gutsy and gritty end and we certainly had to work really damn hard for it, which we expected nothing less against the Swifts. I think there was nothing between the two sides in the first quarter, and perhaps we had opportunities to extend the margin and take a bit more ownership of certain moments in the game where we were a little bit loose.

"So, we certainly reflected and addressed that in the second half, and particularly in that last quarter, where we've gone from four up to then win by 18, I think it is, it's a demonstration, I guess, of the learnings as the game went on.

"The Swifts were a hard side and yeah, really pleased and proud of the way in which the group has responded this week."

Travelling across Australia, after a stopover in Adelaide for a one goal win over the Thunderbirds, Swifts coach Briony Akle said she "thought [they] lost it" against the Fever on Sunday.

"I thought we were right with Fever and we played some really beautiful netball and got a lot of ball back. So, yes we have travelled, but I think at the end of the day it's the simple mistakes that let us down today.

Akle opted to start with a defensive circle of Teigan O'Shannassy at goal keeper and Sarah Klau at goal defence, pushing circle defender Maddy Turner out to wing defence to try and stop the Fever feeding into their tall target of Jhaniele Fowler.

Such a move did put a lot of pressure on the feeds into the circle throughout the contest, and forced the Fever into errors they wouldn't normally make.

Speaking of the role of O'Shannassy played, Akle was really pleased with her efforts.

"Oh absolutely. I think it's anyone's hard task to go out there and defend her, and you know we could have got some ball back to help her I think through the midcourt, but certainly proud of how she played tonight.

After a couple of momentum shifts in the opening minutes at RAC Arena, he first change came in the Swifts' shooting circle, when the now full-time contracted Sophie Fawns came onto the court at goal attack, sending Helen Housby back to goal shooter.

Housby shot four from four super shots in the first quarter to keep the Swifts within one goal of the Fever.

The second quarter saw the Swifts swap their goalies, and then half-way through Kelly Singleton returned to the court, replacing Fawns. While Singleton had initially appeared to be off her shooting, she got her eye in in the second and put a couple of nice shots up.

After a couple stray passes from Alice Teague-Neeld, she was swapped for fresh legs and clear mind in Emma Cosh.

At both ends the super shots were dropping left, right and centre, even Fowler drained one right before the half-time whistle. The high-scoring affair, 40-36 at the main break.

Both sides returned to their original sevens, except for Cosh at wing attack for the Fever, and the home side started to get even more hands on the ball, intercepting and deflecting the Swifts on first and second phase.

Fever had seven intercepts to one half-way through the third quarter, but they just weren't quite converting their opportunities as well as they could.

They had a better hit rate getting into the goal circle in the last and blew out the lead, one final super shot by Fowler topping off an impressive 18 goal victory.

Courtney Bruce was named player of the match, Ryan spoke post-game about the combination of Bruce and goal defence Sunday Aryang, and just how aggressive they were at the ball on Sunday.

"I thought Courtney Bruce and Sunday Aryang were at their brilliant best today. Just really attacking the ball on the outside and hustling hard inside the circle to make every feed really challenging and we were not passive for one second of that game today, defensively.

"We were really attacking ball and hard at line of ball and pressuring everything, so the defensive unit really set that up for us today."

The defensive pressure saw 23 and 25 turnovers from the teams, which is on the higher end, especially from these teams.

West Coast had 22 gains to NSW's nine, 12 of those came from Bruce.

The battle in the midcourt was a big talking point coming into the game, and it was as hard fought contest as everyone predicted.

"I think both teams will obviously pride themselves on their midcourts as being their engine room and there weren't many uncontested, un-pressured passes or leads or drives or options in that centre third," Ryan said after the game.

"So I think both teams really had that as a feature of their play today and we had to obviously rotate and kep trying to find different solutions at times to keep players fresh, but certainly proud of the ability of the players just to make some subtle changes when we needed to under pressure and certainly a tough grind for the midcourt."

One of the particularly intriguing battles was between Swifts wing attack Maddy Proud and Fever wing defence Jess Anstiss. While Stacey Francis-Bayman came onto the court for a short burst at the end of the first half, Ryan gave Anstiss the time she needed to get on top of the match-up.

"I thought she had a tough grind in the first half, I thought Maddy Proud was getting some great depth on us, and we certainly addressed that at the break, and the beauty of Jess is that she's just a silent workhorse that given time and given opportunity, she'll do what she needs to do to get on top by the end of the game.

"And I thought her combination with Verity (Simmons) in first phase, second phase defence got better and better, and I think she really grew in confidence too, with the amount of work that was happening at the back to win ball. So a bit of a selfless task for our wing defence and centre today, but both of them did great."

The Fever did have an extra day than the Swifts to train and tackle their plans, the Fever looking to respond after a nine goal loss to the Vixens on Tuesday and the Swifts exploring what their goal circle rotation looks like, now Fawns has been confirmed as the permanent replacement for Sam Wallace.

While the Fever had the answers today, the Swifts have plenty to take from the loss, including working on that goal circle combination when they finally have a couple of training sessions after just playing games and recovering for the last eight days.

"Yeah [the goal circl is] settling in, I think our shots probably let us down today, but getting the ball was okay and it's a new style for us, and we haven't had training session in over a week. So, hopefully we can get back to Sydney and get some training sessions and continue to build that," Akle said post-game.

The Fever will travel to Sydney next weekend to take on the Giants, while the Swifts will be back at Ken Rosewall Arena as well, to host the Lightning.