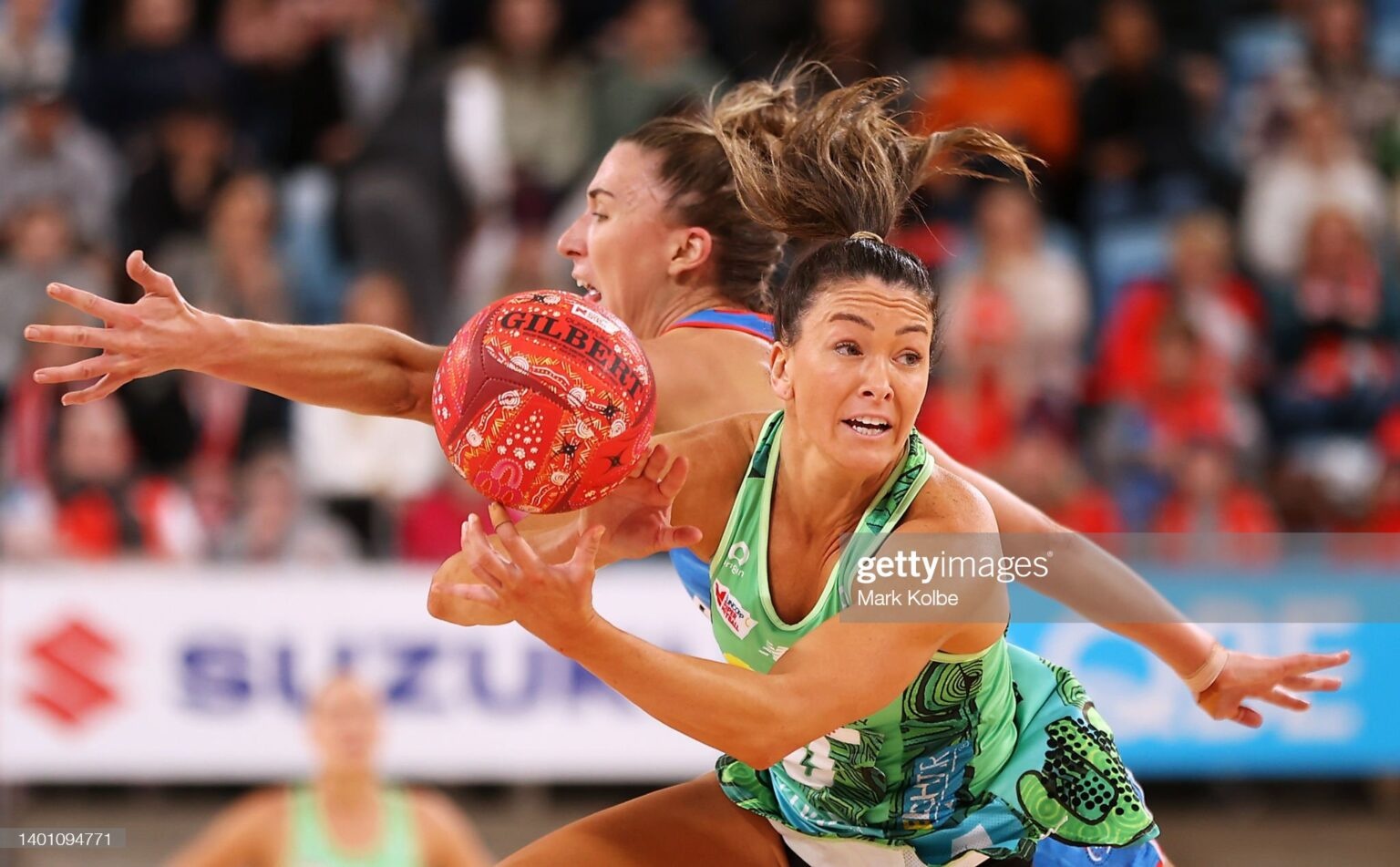 The West Coast Fever narrowly beat the Swifts, escaping an all time comeback to win by one goal and seal second place on the ladder with one game left.

The West Coast Fever narrowly beat the Swifts, escaping an all time comeback to win by one goal and seal second place on the ladder with one game left.

After being up by nine goals at half time, the West Coast Fever were lucky to escape Sydney with a win, after a late NSW Swifts comeback took the reigning premiers to the brink of a stunning upset.

The Swifts shooters were shaky early, as both Helen Housby and Kelly Singleton missed early in the first quarter, in a tone that would run through the match. The defence for both sides was on fire early, as Courtney Bruce and Teigan O'Shannassy anchored their defensive groups early.

The Swifts quickly fell in a hole, as they missed plenty of shots, but a late flurry of Helen Housby super shots somewhat covered their five misses for the quarter, and they trailed by only three goals at quarter time.

The Fever were finding rhythm in attack, although Jhaniele Fowler was on the move early in the second quarter, getting out of the circle to try and drag the Swifts' defence out of whack. But the action was all at the other end of the court.

The Swifts found moving the ball difficult, as every possession required extra passes and running to get the ball down the court, and when they did manage to get the ball into the goal circle, the shooters had the yips, with Housby managing nine misses to half time, and Singleton adding four of her own.

All told, the Swifts were shooting at less than 70 per cent accuracy at half time, while Fowler had more goals than the Swifts.

The Fever defence was also on fire, as Courtney Bruce had seven gains and five rebounds, while Sunday Aryang had three of each of her own as well, as the Fever where well on top.

Down nine goals at half time, the Swifts changed up their strategy going into the third term, shifting Sarah Klau and Maddy Turner back into the defensive circle, and introducing Allie Smith. The move paid dividends immediately, as Fever coach Dan Ryan explained after the match.

"It probably changed all three feeders’ roles out the front, it made it a lot more difficult in the one on one contest," Ryan said. "Allie Smith did a great job in the third quarter and then Alice [Teague-Neeld] kind of got on top in the fourth, so it was a good battle between those two."

Smith had three intercepts and three gains in the third quarter, and sparked the Swifts through the midcourt. A late-quarter run gave the Swifts a chance, as they dominated the final three minutes of the term on a 9-1 run.

All of sudden, the Swifts were back in the match, just three goals down, and with a raucous home crowd behind them.

Sophie Fawns was injected into the game, and the 18 year old played with the poise of a veteran, as she pushed Housby out into the goal attack bib, and into the game.

Akle explained that this was a key decision that the Swifts made to try and bring the match back.

"Switching it up to get ball in Helen’s hands, we know she loves that first and second phase, so I was proud of how they responded to the way they made those changes," Akle said.

As the Swifts closed in on the Fever, the game tightened, but the Fever held the Swifts at two goals down for much of the final quarter, as Dan Ryan brought Rudi Ellis into the game, cycling through his defenders.

"They all offer something a little bit different," he said.

"At times it was really hard to disrupt the Swifts’ flow and connection, and particularly in the second half, they weren’t giving away possession like they were in the first 30 minutes, so we had to keep trying to stay on the front foot to try and disrupt and impact in different ways, and all four of those defenders in different roles look and feel different.

"So it was as much about what the Swifts were doing about us trying to use our toolkit. I thought Rudi came on and did really well in the last few minutes, including a big rebound at the end. We had to throw everything at them because the game was so close, so great that we have that depth."

In the dying moments, the Swifts got themselves level on the back of a Housby super shot, bringing the crowd to a roar with the score at 72-72 with 49 seconds left. Jhaniele Fowler settled for a one point goal at the other end, and the crowd willed on the home side.

With seconds left, Housby missed not one, but two super shot attempts, which would have put her team in front and given them the win, and Rudi Ellis came away with a decisive rebound as the clock expired to ensure that there would be no third attempt.

The one goal win locked up second place for the Fever, and Ryan was proud of that achievement for his team after the match.

"All things considered, I think second place is a great result for us. We haven't had our contracted ten since Round Seven, and I’ve probably only had them all available for four or five games in the entire season.

"With so much lack of consistency and continuity week to week in the most competitive year of Suncorp we’ve had is something we want to really celebrate and be proud of, to give ourselves a second chance is a great position to be in."

Ryan explained that the match had been tough, but a good experience for his side.

"It was a tough game. We started the first 30 minutes really well and had some good control of the game, and I thought Swifts came back into the game in the third quarter exceptionally well. I think what I’m most pleased with was our ability to endure that, adapt to it, and hold our nerve in the end.

"It was a great test for us, and great to see us still get the job done under immense pressure. Its great that we had that challenge and could get the job down, even though they really came at us hard for sure."

The Swifts were dogged, as they were all season, but the loss was emblematic of their season as a whole.

For much of the year, the back end and the midcourt has been a strength, packed with Diamonds players, while the front end has struggled, missing Sam Wallace to injury.

The Swifts have adapted to a moving circle, a totally different game plan, and playing at all times with at least one shooter playing their first season of Suncorp Super Netball.

Despite that, today, Housby struggled, perhaps as the weight of her shooting this year caught up with her, as she finished with 16 missed attempts, more than she has had in any match this season.

After the match, Akle talked about how she had responded to Housby's first half shooting performance at half time.

"I think shooters know when they miss. I think highlighting the fact that they’ve just missed shots is never a good thing. We certainly mentioned it, we didn’t shy away from it, we needed to improve.

"Our percentage plays to shot was right up there, ninety-something percent, so it was just finishing it off, just a little gentle reminder about how important it is to finish those shots off, and she responded."

She also explained that she was perfectly content with the decision that Housby made to go for the super shot (and the win), rather than a regular one goal shot and play for overtime.

"You would have seen on the bench we were going backwards and forwards about whether to take the twos, or ones. At the end of the day, the shooters are out there with the confidence, if she’d nailed that, she would have been a hero. I’d back her in every day of the week to take that shot.

"I’m really proud of the effort that they had to get back into that game, and thats just sport. I said to the team, that is the highs and lows of sport, and unfortunately we’re at the low side."

The Swifts are now locked in a massive battle for finals. A game outside the top 4, and level with the Queenlsand Firebirds and the Adelaide Thunderbirds, their match against the Firebirds next week will decide who is a chance to make finals.