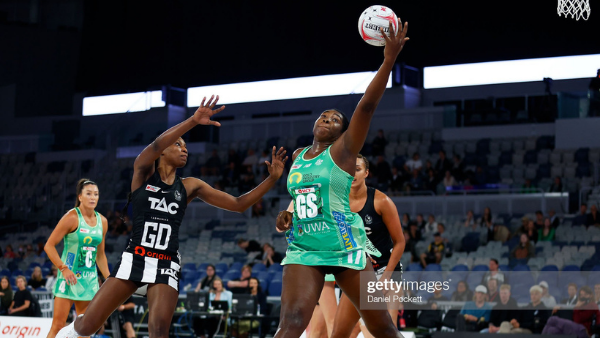 Fever capitalise on Magpies inconsistency to get second win of 2022

Fever capitalise on Magpies inconsistency to get second win of 2022

A dominant first quarter laid the foundation for the Fever to get their second win of the season at John Cain arena. The Fever had a 19-9 first quarter and went on to win three out of the four quarters for the match.

Failure to get the ball into the circle down the Magpies' end saw the Fever get a five-goal lead with three minutes to play in the first.

A quickly followed up supershot from Sasha Glasgow saw the Magpies call a timeout to stop the Fever flurry.

Although the Fever flurry continued with a goal from Jhaniele Fowler extending the Fever’s dominance out to ten points at quarter time.

Collingwood coach Nicole Richardson said that she was impressed with the Magpies' start to the first quarter but they couldn’t sustain that level of performance for a whole quarter.

“I think for us we set out to have a good start, fever is a team that if you look at last week they actually jumped lightning quite convincingly,” Richardson said post-match.

"I was actually happy with the start of that quarter, unfortunately, we just addressed it there, we had good intent and good purpose but it was like how the hell did that scoreline get to 19-9 at quarter time, so our first and second quarters were uneven.

“I think in the third quarter we jumped out of the blocks but unfortunately we didn’t have the capacity to be able to sustain that for the back end of each quarter. That was a double-edged sword, a positive and a negative.”

Changes came for the Magpies with Kelsey Browne moving into centre in an attempt to inject speed into the midcourt with Maggie Lind coming on at wing attack and Gabby Sinclair going on into goal attack.

An intercept from Jodi-Ann Ward saw the Magpies get back to back goals bringing the margin back to nine points.

A great out of court shot from Sinclair brought the margin down to nine, then an offensive contact against Shimona Nelson saw the Fever transition the ball down either end to bring the margin out back to 11.

A pick up from Jess Anstiss on the defensive circle edge saw the Fever capitalise through Jhaniele Fowler taking the margin out to 13 points.

Silence filled the arena as captain Courtney Bruce went down with what looked like an ankle injury, Rudi Ellis came out at goal keeper after an injury timeout.

Bruce said post-match that she's a bit sore after getting tangled up with Shimona Nelson.

"Shimona and I both have pretty big feet so we got a bit tangled," Bruce said.

"I probably shouldn't have contested but I'm alright. I might be a bit sore but I'll be fine."

Glasgow scored a super shot after the timeout to extend Fever's margin, with the side going into the halftime break with a 17 point lead.

Bruce came back on after the halftime break as goalkeeper. A pick up from Ash Brazil, who moved into the centre saw the Magpies get the first points of the second half. Molly Jovic came back on in wing defence.

A replay call from Sophie Garbin thanks to the defensive pressure of Bruce saw the ball go down to Fever's attacking end but the Fever couldn’t capitalise with the ball going back to the Magpies shooting end and Nelson capitalising.

The Fever changed up their defensive end with Ellis coming back on at goal keeper with Bruce going out into goal defence.

Garbin was able to keep the ball in before then getting back into the wring to score a supershot bringing the margin back to 14 points.

Garbin got a supershot right on the buzzer but Fever was able to keep the comfortable lead of 14 points going into the final quarter.

Richardson said that she was happy with the way Garbin was developing into a starting goal attack player as well as her partnership with Nelson.

"They haven’t had a lot of time out there, that’s only their second game, so I think that is really growing, the connection off the transverse line, whether that’s Kelsey Browne or Maggie Lind out on the wing attack, I think that’s growing.

"I’m looking forward to seeing where that can take us, in the remaining 12 matches because its something we need to develop and need to grow, but happy with where that’s at at the moment. Sophie is still learning the starting goal attack role at the moment, so that’s going to take a bit of time.

"She’s come from a club where she was an impact player, whereas we're throwing her, not only in the starting seven role, but starting goal attack, which is something foreign for her, so it will get there, but happy with where it's progressing so far."

Sunday Aryang came back on into goal defence with Ellis going back to the bench. With the Fever back off to a blistering start with Verity Simmons having a nice drive onto the circle edge to see Fowler convert the goal.

Emma Cosh came onto goal attack with eight minutes to play in the final quarter. A tip from Brazill saw the Magpies bring the margin back to nine before backing it up to bring the margin to just eight points.

A Fever timeout came with just under five minutes to play, with Fowler settling the score with a goal from Fowler. A pick up from Aryang allowed the Fever to bring the margin back up to ten points.

Richardson said that her side wasn't able to back up their performances after a time out.

"It was actually the timeouts that were called on us that hurt, we didn’t respond well, so once a timeout was called throughout the quarter, they got a really good run on us, so that's something we will have to go back to the training environment and have a look at.

"So like I said, just disappointing that we worked our arses off to get so close with five minutes left in the match, you know really, the game could have gone either way, the game was still in the balance with five minutes to play, but we look at the scoreline and we’ve lost by 17, that’s what grates you."

Fever’s defensive pressure in the final minutes of the match held them in good stead after a held ball call in their defensive third allowed Fowler to comfort down the other end and bring the margin back out to 14 points.

The timeout was able to stop the Magpies in their tracks with the rest of the match momentum was going the Fever’s way.

Bruce said that the match was a great challenge for the Fever.

"That game really tested us," said Bruce, in her milestone match.

"We weren't having a great start in every quarter and in that last quarter we came out firing.

"Little things to work on but happy with that."