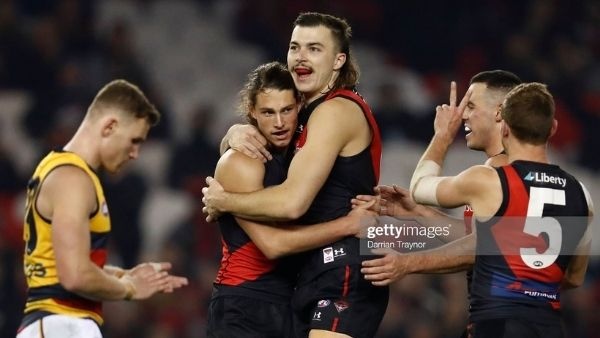 After making the finals for the first time since 2019, fans saw the newest Baby Bombers on show and dared to dream for the future. Can Essendon soar to new heights or will it be the same old story?

After making the finals for the first time since 2019, fans saw the newest Baby Bombers on show and dared to dream for the future. Can Essendon soar to new heights or will it be the same old story?

After making the finals for the first time since 2019, fans saw the newest 'Baby Bombers' on show and dared to dream for the future. Can Essendon soar to new heights in 2022 or will it be the same old story?

After a finals berth for the first time since 2019 last season, the Bombers were up and about. While it didn’t end the way they’d hoped, the side will be looking to get back to the September action and go a step further than an elimination final.

From an off-season perspective, Essendon brought in defender Jake Kelly from the Crows and stocked up on young talent including highly -regarded midfielder Ben Hobbs and son-of-a-gun in Tex Wanganeen.

Coming into the start of the season the Bombers came up against the Saints in the AAMI Community series. Although they didn’t get the win - going down by 11 points - there were promising signs with Peter Wright kicking three goals and Archie Perkins kicking two.

There are a few examples of that, the first two which was the Round One loss to the Hawks and the Round 16 loss to the Cats where the Bombers jumped out of the blocks early, but couldn’t keep the lead.

In the Hawthorn game, Essendon was 39 points up at half time having scored 66 points in a half of football but failed to put the foot on the gas for the remainder of the match, and instead let Hawthorn into the game and ended up losing by a point.

The Geelong game was a similar story, where Essendon was able to burst out the gates, being up 26 to seven at quarter time but once again couldn’t close out the match, instead going down by 41 points.

In the Bombers' last match of the season, the side showed it right up to the Bulldogs until half time, only trailing by two points at the main break. The Bombers went on to remain goalless for the rest of the match, only scoring five points for the remainder of the game.

Failing to stay in matches has proved costly for the Bombers but with more experience coming in with Jake Kelly making the move from the Crows and Michael Hurley returning from a long-term injury in some point in 2022, adding that experience may help.

It was a very interesting season for the Bombers, after what was a slow start after a one-point loss to the Hawks after being up by 39 points at half time. Essendon was then slapped with a 54 point loss to Port Adelaide, with many fans after that point believing that it would be another tough year for the team.

Things turned around for new coach Ben Rutten with the Bombers winning their first ANZAC Day game since 2017. Essendon then went on to make the finals for the first time since 2019 after winning the last three games of the home and away season. Unfortunately Essendon weren’t able to progress past the first week of finals, going down to eventual runners-up, the Western Bulldogs.

One of Essendon's biggest strengths is its midfield, especially its depth. With Darcy Parish and Zach Merrett arguably having career-best seasons in 2021, it’s transformed that Essendon midfield from one that struggled in the past to one that can take it up to some of the best midfields in the competition.

The Bombers also have up-and-coming ruck Sam Draper, who has showed throughout parts of last season that he has the potential to rise to the heights of the likes of Brodie Grundy and Max Gawn in the future.

The Bombers midfield is that strong that Dylan Shiel will be battling to cement his spot in that part of the ground as like like of Parish, Merrett, Stringer and Caldwell may be forcing Shiel out of that area.

One of Essendon's biggest gaps in 2022 will be its key position depth. While proving that the club could stand tall against some of the best last season, one key gap was in the Bombers' defensive end.

While Jayden Laverde has made himself a key pillar in Essendon's backline, it’s when the team come up against the tall and powerful key forwards, like Tom Hawkins of Geelong and Charlie Dixon of Port Adelaide that the side tends to struggle.

When Essendon came up against Geelong in Round 16 last season, Hawkins was able to kick six goals for the night and Jeremey Cameron kicked three. It was a similar story in Round Two when Essendon came up against Port Adelaide, with both Dixon and Mitch Georgiades kicking four goals each, which showed that the side didn’t have an answer for those big key forwards last season.

After missing out on the draft, Tex Wanganeen - son of Essendon and Port Adelaide great Gavin - went on to train with the Bombers over pre-season where he impressed many during his time on the track, so much so that the Bombers offered him a spot thanks to the new Supplemental Selection rule.

In the practice match against the Bulldogs at The Hangar, Wanganeen kicked two goals including a nice one on the run in the final quarter.

Although it may be hard to break into the Essendon forward line, Wanganeen is a star of the future and it won’t be too long until he writes his own legacy.

The Bombers have a lot of promise going into this season, with young stars like Nik Cox, Harrison Jones and Archie Perkins set to build on impressive starts to their careers and with the already stacked star talent in the mix with the likes of Parish, Merrett, Stringer and Andrew McGrath, it will be hard to see the Bombers sliding too far down the ladder this season.