Edge of the Crowd’s January 2022 Playlist 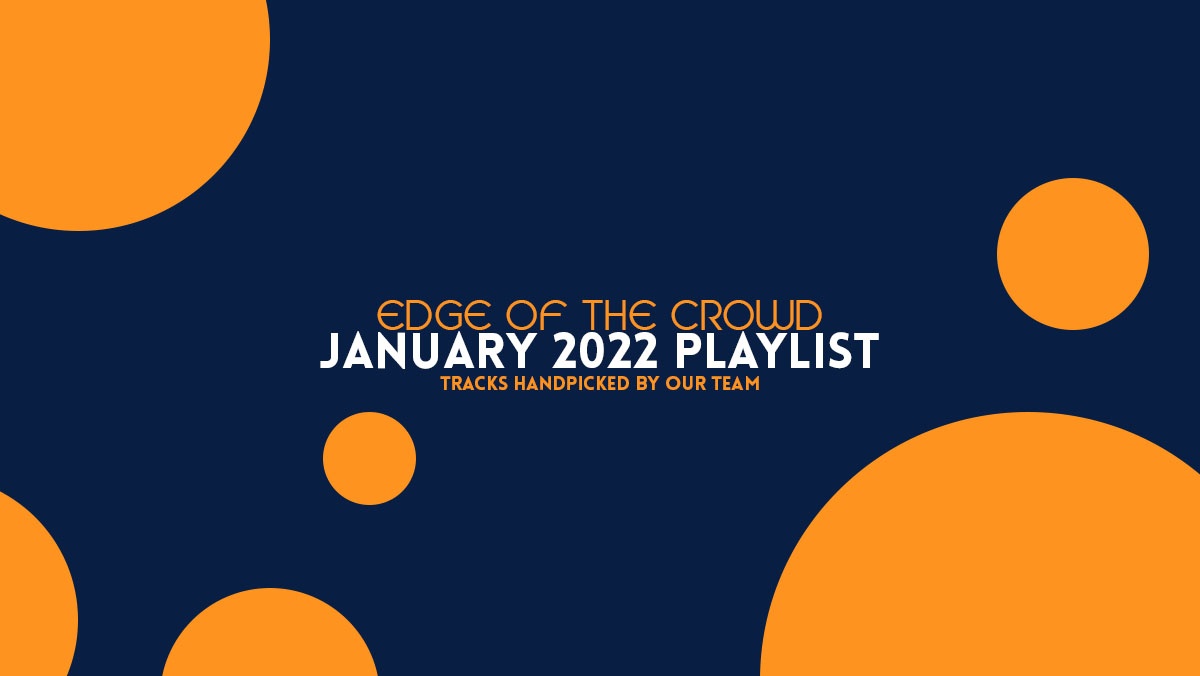 Want to know what the Edge of the Crowd team has been listening to? Look no further.

Our team Spotify playlist is filled with new finds, guilty pleasures, hidden gems, and more! Read about the songs and the reasons they were chosen below.

The 2008 classic from Vampire Weekend should be on everyone’s summer playlists as they trek up the coast this summer. If sunshine, surfing, and all things beachy had a distinctive sound, it would be this song - from the skittering drum beat, to the bright, lively guitars. It’s hard not to feel the good vibes whenA-Punkplays.

Kid Cudi is an artist who seems to have influenced most musicians. Even if not directly, Cudi’s music has impacted a generation of content creators. It's super cool to see Phoebe Bridgers feature on one of his tracks. The collaboration was unexpected but seems to work!

Olivia O’Brien’s hitJosslynwas released in early 2020. It’s one of those songs to sing in the car or shower at the top of your lungs. Upon first listen it was a song that found its way instantly on my playlist and has stayed there ever since.

Alex Lahey’s latest release that came out in October,Spike The Punchis an energetic song that combines vocals, guitars, drums and keys. Not someone to put out a bad song, this song is one that can be liberating to listen, sing and dance along to, such is the beauty and nature of the song and its essence.

AsRide or Dieis the third single from Hippo Campus' upcoming album, I was expecting good things based on the earlier singles. Boy, did they deliver! Although the track is lyrically repetitive, the instrumentals continue to keep things interesting each time you play the track.

in the wake of your leave- Gang of Youths

Beloved Sydney band Gang of Youths are building up to the release of their new album angel in realtime., and it is getting more and more exciting with each new single they put out. in the wake of your leave leans into the more indie sensibilities of the band, with groovy vocal effects at the start and end, and an acoustic guitar throughout. Lush percussion and strings add melancholy to the upbeat track, the chorus is catchy, and the melody is fun to follow.

Go to Hell- Between You & Me ft. Yours Truly

Back in 2018, two little Sydney bands called Between You & Me and Yours Truly did a lap of Australia, playing small venues to crowds of enthusiastic pop-punk fans. Flash forward to now, and both bands have toured and played massive festivals overseas, and are getting regular national radio air time. The two bands have paired up for this instant classic pop-punk track - the perfect showcase of friends working together to achieve a mutual dream.

If any song captures the ‘right person, wrong time’ sentiment perfectly, it’s Hayd’s 2021 releaseClosure.Listeners go on an emotionally charged journey as the subject asks the lingering, unanswered post-break-up questions, backed by slow piano and acoustic guitar. It’s a heart-wrenching masterpiece that I'm glad I accidentally stumbled across on YouTube one night.

Tears in The Club-  FKA Twigs ft. the Weeknd

FKA Twigs, the reigning queen of the sad girls, makes a play for the club with this ethereal banger. The song comes with a few fascinating collaborators. Arca, an electronic visionary, co-produced the track, and the Weeknd features, continuing his hot-streak of features with Swedish House Mafia, Rosalia and Post Malone.

Out of Time- the Weeknd

Speaking of the Weeknd, this week he droppedDawn FM, his follow-up to the 2020 smash albumAfter Hours. This disco, boogie and new-wave album is a fictional radio station that soundtracks a form of purgatory i.e. Los Angeles traffic.

One of the highlights,Out of Time, samples the 1983 Japanese city pop songMidnight Pretendersby Tomoko Aran. The genre of city pop is itself influenced by American soft rock and boogie of the era. The Weeknd uses this mix of genres to add to the feeling of complete removal from time.

The Melbourne-based, rising musician delivers again inIDC,a fantasy about getting revenge on those who wronged her. It carries her trademark guitar-led, gothic, emo. pop sound, the main sound of her upcoming debut mixtapeQuantum Jumping.As a long-time daine fan, it’s another strong entry from her, and I look forward to her impending releases.

A common thread across both my songs is that they are both looonnnnnng. Like, All Too Well-length long. I love them because you just know that Prince (the songwriter of this bop) wrote the hook and IMMEDIATELY knew that it was a banger, so much so that it deserved to be worshipped for a whole nine minutes. A demo of the song was released on Prince’s posthumous album Originals that does not feature Sheila E’s infectious percussion rhythms. Also, I too, have big thoughts, big dreams, and would like a big brown Mercedes sedan.

DNM (pronounced denim) is comprised of three equally talented solo musicians, who combined forces to create a perfect blend of pop, rock, and hip-hop. Their second single,FALLING OUTwas instantly stuck in my head, particularly due to Moise Igeno’s iconic “I don’t knowww”.

The songJoshwas released in early 2021 and is an upbeat breakup song by Australian artist Peach PRC. Like many, I discovered the song through TikTok when artist Peach PRC uploaded a snippet of the song on her TikTok account where the song gained popularity from 1.7m followers.

this is the third time i’ve tried to post this, giving me real josh behaviour rn

Lost In Desire- The Bluebottles

In a search to find more Australian bands to listen to, I came across Brisbane-based The Bluebottles. Since then, their EPLost in Desirehas been on repeat. The EP’s title track is one of my favourites. Whilst the sound is a bit melancholic, the lyrics are actually quite sweet and even uplifting at times.

Honeyis the ninth track onHalsey'srecent albumIf I Can’t Have Love, I Want Powerand is probably one of my personal favourites from the album. When asked about the song,  Halseytold fans that the song is about a wild girl.The song has that alternative rock vibe to it with the drumbeat a key to the track of the song.

Miss Your Birthday- Teen Jesus and the Jean Teasers

Following on from previous single AHHHH!, Teen Jesus has given us a fun little number that gets heads bopping and feet tapping. Punk with hints of pop and a belter of harmony near the end is real ear candy. You can imagine just how energetic it would be when performed live - hopefully, we all get to experience this soon!

Stray Kids are one of the few non-English speaking artists I listen to. The eight-member K-pop group sing/rap their songs primarily in Korean. It’s worth noting that there are two members who were raised in Australia though! Strongly recommend checking out the accompanying video forBack Door, it’s a good example of the versatility incorporated into the K-pop genre.

Although the songI’m Trying (Not Friends)was released in August 2020, it didn't get popular until over a year later.  Like many, I discovered this song on TikTok in early December with the catchy bridge making it stand out. Within the first listen the Maisie Peters hit was in my playlist and playing on a constant loop.

More Than You Know- Axwell /\ Ingrosso

You know when you rediscover a song you haven’t thought about in a long time? That was me with Swedish EDM duo’s,More Than You Know.From the opening guitar strums to the closing synths, it will have you thinking about and appreciating the special people in your life. Plus, it's super catchy and you can't escape the upbeat, positive mood it creates.

There is nothing I enjoy more than musicians who are good at improvisation coming together to jam, which is what this song feels like. It’s just so joyous to hear Karen Young and her band have fun with the music, jampacking it with little quirks and details while also giving each instrument space to have their moment.

A band I hadn’t heard of before seeing them at Knight and Day Festival, I loved them so much I spent half the car ride home listening to them! The four-piece captures so much emotion into their songs, including, like this song, an ability to tackle tough topics in an honest way through upbeat, melodic notes, showcasing their range, but also a way to bring awareness to such matters in a unique, but candid way.

With their sixth single release in less than two years, Paperweight deliveredTrackslast month, in a throwback to the catchy pop-punk sounds of the bands that got me into the genre in the first place. The song has so many build-ups and catchy beats which make it easy to listen to, sing along to and above all, pump you up to go forward and prepare for, and accomplish anything.

Listen to all the songs in our Edge of the Crowd January 2022 Playlist on Spotify.