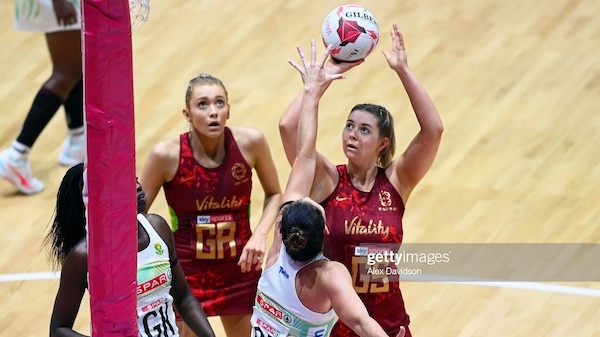 English Roses a class above the South Africa Proteas

English Roses a class above the South Africa Proteas

England impressed across the court, with its experienced defensive end shining and the younger attack end adapting quickly to different combinations.

Speaking post-match on the broadcast, player of the match Layla Guscoth was most pleased with the side's ability to press on to score the highest ever Quad Series total of 71 goals.

"I think it was pushing on, really. I think we went into the change room at half-time, we wanted to push up, we wanted to do better and keep trying to execute what we keep working on in training.

"It's going to be a long four days, so trying to nail down some basics [early on]."

Almost 20 years after making her Roses debut, Geva Mentor was once again named in the starting seven at goal keeper for the side, her 150th Test cap.

At the opposite end, Eleanor Cardwell got the nod to start in goal shooter in the absence of experienced goaler Jo Harten, who has Covid-19.

It was a tough start for South Africa, a footwork call against Lefébre Rademan compounding the side's early struggles to move the ball forward effectively.

England dominated early, converting comfortably and only had one turnover in first five minutes of play.

Ine-Mari Venter started to find her groove at goal shooter for the Proteas and was scoring without issue, to bring her team back into the contest.

South Africa had two separate runs of three goals late in the first quarter, including one off the back of two centre pass turnovers by England, and it brought the margin into three at the first break.

After the first, Roses coach Jess Thirlby made the early switch to bring George Fisher into goal shooter and the difference was felt immediately. Her takes overhead and the connection with Helen Housby, made for exciting viewing for the home crowd at Copper Box Arena.

South Africa's midcourt combination of Bongiwe Msomi and Izette Griesel struggled against the duo of Serena Guthrie and Beth Cobden.

There were also challenges in defence for the Proteas, who are missing key players in Karla Pretorius and Shadine van der Merwe. Phumza Maweni and Monique Reyneke were in the defensive circle, but had little impact against leaping shooter Fisher and the speed of Housby.

It brought about a change, as Zanele Vimbela moved into goal defence for the final minutes of the term.

The English bench had some movement too, Guthrie was subbed off for Laura Malcolm to have a run in centre, and the side pressed on to lead at half-time, 37-24.

South Africa's issues were clear in defence, but in the attack end it was a matter of controlling its own play more. Unlike England, South Africa lacked patience and was going too often for the cross-court ball or trying to go over the top, and the likes of Guscoth and Mentor were having a ball with their intercepts.

The body-on-body structure from the English midcourt was working nicely, and that only made it easier to get Fisher or Housby free in the circle.

There were a couple of changes to the English seven at the main break, with Guthrie moving into wing defence and Eboni Usoro-Brown taking over from Mentor at goal keeper.

The Proteas also made one change with Khanyisa Chawane coming onto the court at wing defence.

Despite the changes that kept coming for the Roses - Thirlby clearly very confident in her squad and happy to rotate the bench - the Roses never lost any momentum through the second half.

Late in the third quarter Imogen Allison came on at wing defence, while Guthrie moving to the bench, and Sophie Drakeford-Lewis replaced Housby at goal attack.

From Usoro-Brown at one end to Maweni at the other, the read of the play from the pair of goal keepers was brilliant to watch.

However, only one side converted these prized turnover opportunities.

There were plenty of changes at the final break. South Africa brought Sigrid Burger into the goal circle, pushing Ine-Mari Venter out to goal attack, Tshina Mdau moved into wing defence, Monique Reyneke returned at goal defence, and Simone Rabie took over from Maweni at goal keeper.

Mentor returned to the defensive end for England, pushing Usoro-Brown out to goal defence for the Roses. The 2018 Commonwealth Games gold-medal-winning duo was back!

OVER A THIRD – QUAD SERIES PREDICTIONS AND DIAMONDS’ SEVEN

With 10 minutes to go in the first, Thirlby made more changes, Cardwell returned to the court at goal attack, moving Drakeford-Lewis out to wing attack. The new wave of Roses were allowed to show their talent in the final term of play.

While Maweni returned to her spot at goal keeper, the Roses continued to pile on the goals and beat the Silver Ferns' previous Quad Series record by one.

The Proteas might have played a lot of netball in the last year, with 18 test matches, but the calibre of their competition has been far from the world's best.

Up against the Roses, the Proteas were clearly outclassed and the scoreboard showed it. Speaking after the loss, Dorette Badenhorst still saw some positives in how her side matched up and where they can improve this week.

"I think we just made too many mistakes..." she said.

"I think there's a lot of positives you can take from this game, and just the opportunity to play.

Guscoth finished with two intercepts and five deflections, and was named player of the match.

England return tomorrow against New Zealand, while South Africa take on Australia when play begins at 1am AEDT.