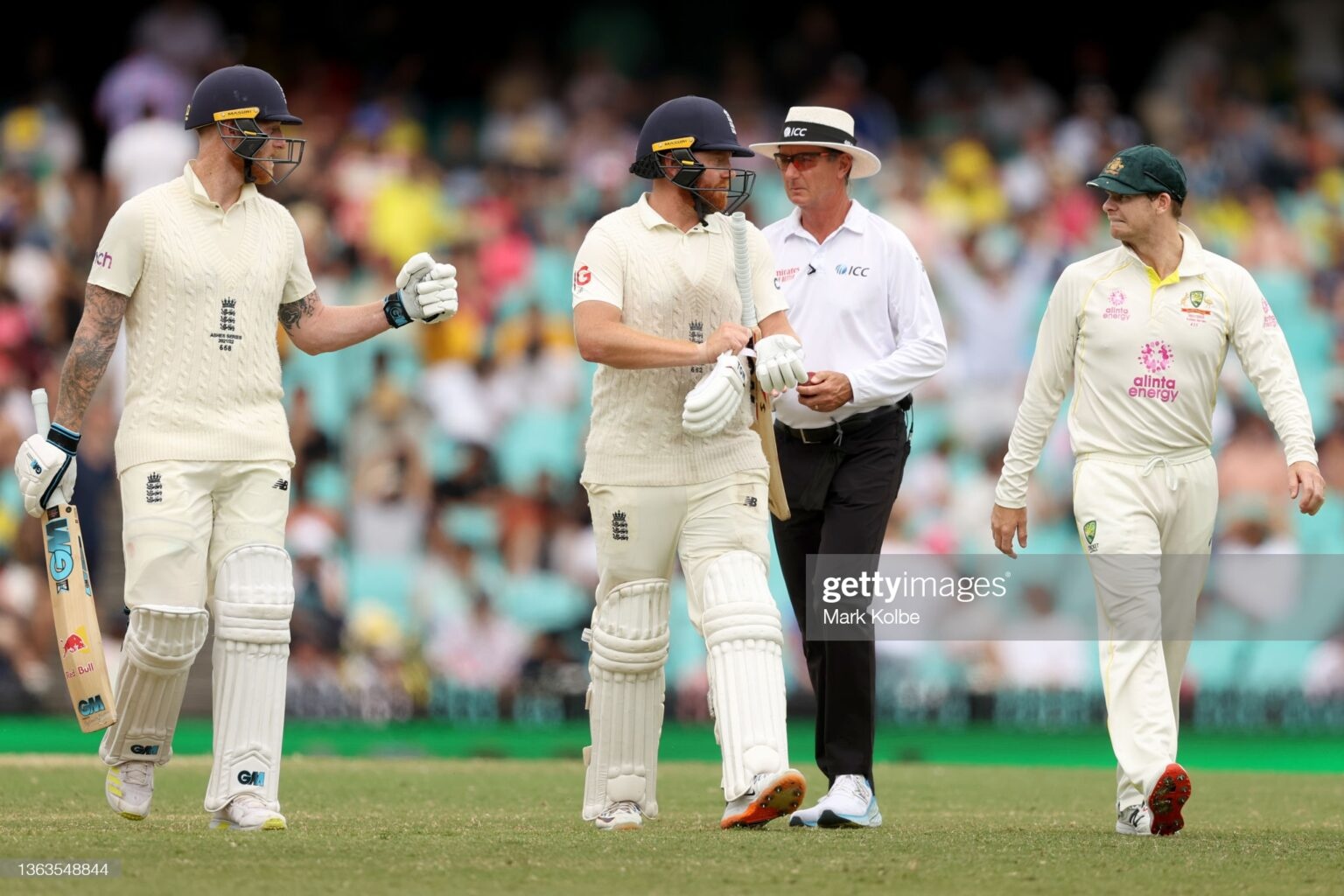 England held off an all day onslaught by the Australian bowling attack to secure a thrilling Ashes draw, and prevent a chance of a whitewash.

England held off an all day onslaught by the Australian bowling attack to secure a thrilling Ashes draw, and prevent a chance of a whitewash.

England has avoided a whitewash after keeping out Australia's bowlers in the final hours of the Test, finishing 9/270 to secure a draw.

Arriving this morning, 357 runs behind, and with ten wickets in hand, Zak Crawley and Haseeb Hameed set out to slow the Australian attack.

Both openers survived being dropped, but Hameed was out cheaply, and Dawid Malan followed, clearly affected by his hand, which was struck in the first innings.

Zak Crawley played with the freedom he had threatened throughout his time in the side, and dispatched the Australian fast bowlers to all corners of the ground.

His attacking play drew the raucous support of the Barmy Army in the stands, and by the time he was out on 77, he had absorbed 100 balls, and seemed to have taken the energy out of the Australian bowlers.

At lunch, England were three wickets down, and the weather gods were smiling on them. In the end, an hour of play was lost, and England resumed at 2:10 pm with 56 overs to play.

Root and Stokes hung on with grit, playing few shots, and forcing the Australians to bowl to them.

Joe Root again fell to Scott Boland, out on 24, but had still been at the crease for more than two hours, as he had methodically batted to try and save the Test.

Ben Stokes was clearly affected by his side strain, but was visibly upset with himself when he was out for 60 off the bowling of Lyon.

Stokes had batted with Johnny Bairstow for an extended period, and forced the Australians into frustration, and Bairstow continued his strong batting from the first innings.

Eventually Bairstow was out for 41, having also occupied almost two hours, and having done so with a thumb that he has refused to have scanned, as it may reveal a fracture.

Jos Buttler attempted to hold on, but was dismissed by Australian captain Pat Cummins with the new ball. Mark Wood followed in the same over, to a vicious yorker, and Australia appeared on the cusp of victory as Jack Leach and Stuart Broad were at the crease, with just Jimmy Anderson remaining.

At that time, the sun was starting to set, and England was left with just a handful of overs to negotiate. Leach and Broad stuck to the task, to the celebration of the Barmy Army, who didn't stop singing from about 5.30 pm.

As the sun started to set, Australia was forced to move away from its pace attack, as the light was failing. Instead, Steve Smith was thrown the ball, in a moment that was reminiscent of Michael Clarke taking wickets late on Day 5 to win a match against India.

To make the comparison real, Smith struck with the last ball of his first over, as he found the footmarks, and Leach's edge, before Warner took a sharp catch.

It was left to Anderson to face Smith's final over, as Australia crowded the bat. Pat Cummins had positioned himself at silly point, under the helmet, but it was to no avail as Anderson negotiated the final over and secured the draw.

BEN MCDERMOTT BRINGS THE HURRICANES ALMOST ALL THE WAY HOME

After the game, Root was happy to recognise the achievement of the side that refused to capitulate.

"It's a small step forward," Root said. "Coming into the game I spoke a lot about putting pride back into English cricket and into the Test performances, and I think the fight and desire and character shown today, and throughout the five days has done that in a small way.

"We go into every test match wanting to win and to win convincingly, but from the position we found ourselves in at certain points within this game, to be able to sit here having drawn... at the starts of today, it was always going to take a good performance and really proud of the way the guys dug in managed to do that."

Root acknowledged the challenges his side faced, with Bairstow, Buttler and Stokes all sporting significant injuries. Root particularly praised Buttler, who will fly home and take no further part in the tour.

"For him to front up and put in as he did from that moment that he took that knock, shows how much he cares and how much it means for him to play for England.

"A lot of the guys could see a number of players hurting physically, and still putting in a huge amount and in many ways, it lifted the rest of the group, and I'm really proud of the way they stood up at times, clearly in. a lot of pain. to put in, and for them to produce for England."

Root also saw the result as key to England finding momentum in the series, and avoiding the dreaded whitewash.

"It was hugely important, and especially after the back of the previous Test match, which was probably one really dark day for English test cricket, and it would be very easy for us to roll over and feel sorry for ourselves.

"I asked for the guys to try and put some pride back into the badge, and to show how much we care about playing for England going into the game, and I think you can certainly say that was the case this week.

"We didn't win the test match, and we were a very long way behind in the game, to still find a way to draw from where we were, shows the amount of character and desire and pride that the guys feel when they pull on an England shirt."

Despite leading a side that was unable to take all ten English wickets in the fourth innings, Cummins said that he took a lot out of the game from a captaincy as well.

"I certainly learned a lot," Cummins said. "I felt that even from the second innings compared to the first, I felt a lot calmer and in control. I felt like we managed the pace of the game better than we might have at times in the first innings.

"There's a few things, waiting on Scotty Boland, and a few other things that we had to manage at the same time, but I felt a lot more in control in that second innings.

"That was a bit of a learning, just to take that extra second and take that breath at the top of the mark. Speak to the bowler and have really clear plans."

Cummins refused to be drawn on his decision to declare late on Day 4. He had waited for Usman Khawaja to make his second century of the Test, and declared with about 110 overs left in the match.

"I wanted around about 3.5 an over. I thought the wicket was still not playing too many tricks... I thought 110 overs was enough time. Having the luxury after the way Greenie [Cameron Green] and Usman batted, we had enough runs in the bank that we could effectively attack for those whole 110 overs."

Cummins also refused to criticise the umpire's decision to require Australia to bowl spin in the final minutes.

"I would have liked to bowl Scott [Boland]," Cummins explained. "But I think it was probably the right decision to be fair, it was pretty dark out there.

"It was disappointing that I couldn't use Scotty, even Greenie, I think I told Greenie to warm up about five times, but that's just the luxury of having five bowlers. You can only bowl two at a time."

"It is what it is. It was pretty dark, I think they made the right call."

Cummins and the Australians will now have five days to regroup and prepare for another Test match, with the tired and sore bowlers. Mitchell Starc is the only bowler. to have played all four Test matches so far, and Jhye Richardson and Michael Neser are expected to be fit to challenge for selection.

Usman Khawaja was named man of the match in his return to the Australian side, after posting a hundred in each innings, the third player to do so at the Sydney Cricket Ground.

The fifth Ashes Test begins on Friday, January 14 at Blundstone Arena in Hobart.