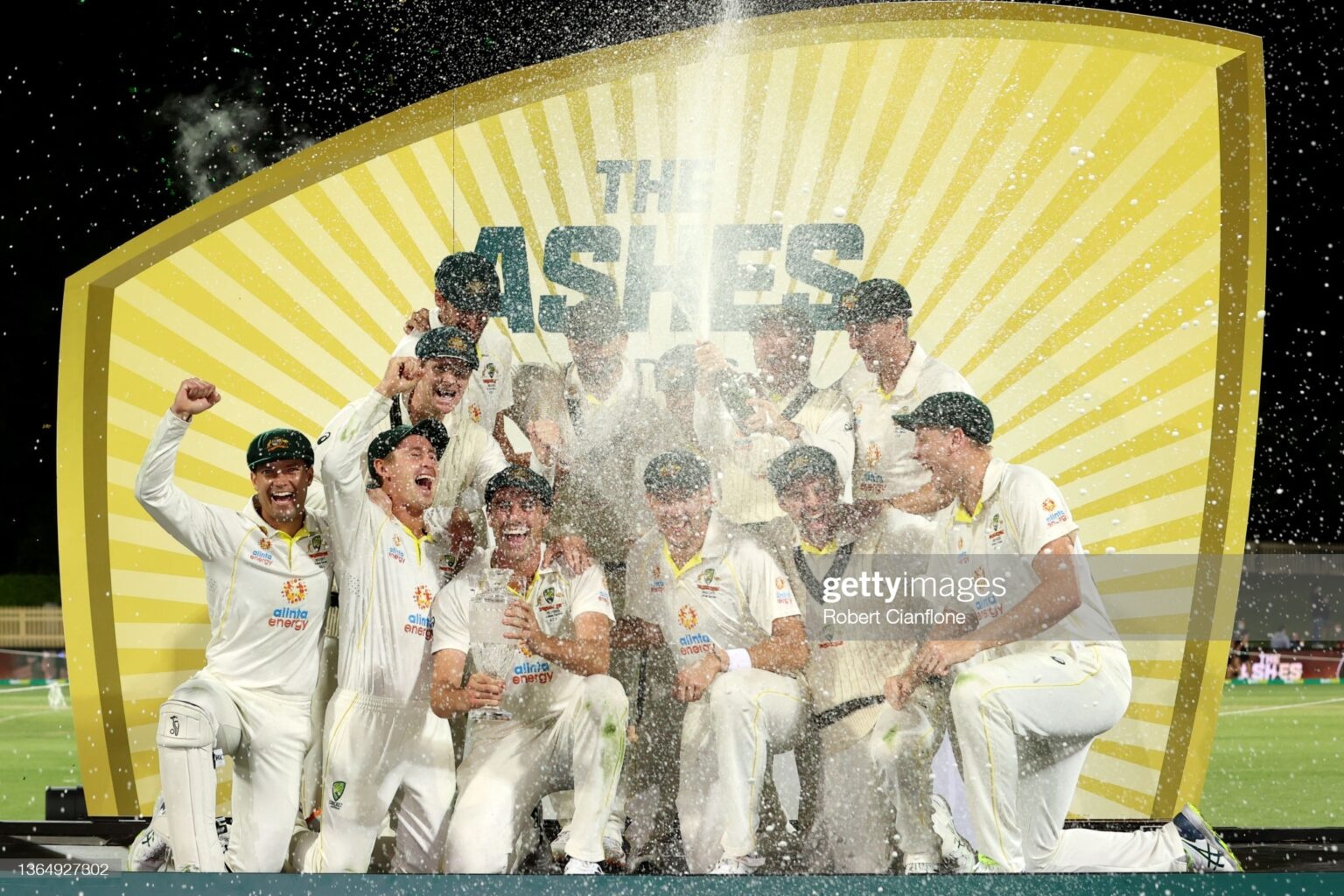 An Embarrasing English batting collapse has gifted Australia another victory to take the Ashes series 4-0.

An Embarrasing English batting collapse has gifted Australia another victory to take the Ashes series 4-0.

Australia has secured the Ashes with an incredible 4-0 series victory after an embarrassing English batting collapse after tea on day three. Cameron Green took the fight to the English after tea taking three quick wickets which then led to a collapse of 10-56.

Pat Cummins said after the match on just how special this Ashes victory is.

“As a professional cricketer, these are the series you have in your diary a couple of years out. To be at the end winning four-nil it’s huge so I’m really pumped.

"This is incredible, these are the series where you want to peak and to be thrown the captaincy at the last minute, everything gone to plan and there are so many positives."

The day didn’t start all that badly for the English, with the bowlers taking wickets on regular occasions. Scott Boland was first to go to the bowling of Wood before Travis Head pushed one through to the keeper down the legside only adding eight to his first-innings century.

Mark Wood continued to terrorise the Aussies batters with his fast short bowling. Once again it just shows how important quick bowling is in Australia, for England they need to bring the quickest bowlers out to Australia for the next series in four years’ time.

Alex Carey and Cameron Green paired for perhaps the most important partnership of this series, they both put the fight back to the English pushing the lead past the all-important 200 mark. Alex Carey showed the fight he needed to after a lot of criticism over the last week or so, he also added some excellent catches in the second innings to likely secure his place on the plane to Pakistan in a few months’ time.

Carey was eventually out to Stuart Broad with him trying to get to his second Test match 50, it wasn’t to be with Sam Billings the keeper taking the catch. Mark Wood then blasted away both Mitchell Starc and Pat Cummins to secure his best-ever figures in Test cricket with 6-37. He has clearly been the best in this series and to show the fight he did in this Test was simply incredible.

Joe Root touched on Mark Wood after the match.

“He’s someone that throws everything into every performance and every ball and he’s very deserving for that.”

Australia set England a very large target of 270 for victory, on this pitch that was seaming every it was always going to be a big ask. In the end, England never looked closely, but it wasn’t always that way. Even the WinViz metric had England as favourites at one point, it certainly was tense out in the middle.

Zak Crawley and Rory Burns started much better than in any other match, pushing the score past 20, past 30 and past 50, the partnership got to 68 as England became favourites for the very first time in the series. Unfortunately for England the big unit Cam Green came on with the ball to dismiss the top three of England.

Joe Root went on to criticise the batting group after the match.

“It’s pretty obvious we need to put more runs on the board, too often we haven’t given our bowlers enough to work with. In all areas in general we’ve been outplayed sometimes you have to put your hands up and say you were outplayed.

"It's clear where the opportunities are there and where the changes need to be made.

"The quality is there and there is the talent there but we haven't put the performances in on this trip, we've been bowled out far too many times for under 200 and you won't win Tests when you don't put runs on the board."

Joe Root then put some fight back to the Aussies, but the pitch continued to play tricks on the batters. Scott Boland got one to stay low and go under the bat of Root, the smile on his face almost in laughter pretty much summed up how the series has gone for England.

From there it was simply pathetic, it may be harsh but that’s all you can describe that collapse as. Ben Stokes was out pulling into the deep when it simply wasn’t required, Ollie Pope was then bowled by Pat Cummins who took his first for the innings.

Sam Billings’ wicket was awful, although in his debut Test he might be excused for simply popping one up to mid-wicket for a simple catch. Scott Boland and Pat Cummins then ripped through the tail to secure the series for Australia

Joe Root spoke after the match about how difficult this Ashes has been.

“It’s been a real tough tour for us, we’ve played good cricket in parts, but we haven’t managed to play a whole match.

“We now have to learn from those mistakes and get better, it won’t be long before we’re playing Test cricket again so there will be opportunities to improve.

"It was a disappointing display today with the bat, especially after the start we had with the bat, it felt like we had a real opportunity to win this Test match."

Nathan Lyon was once again not required with the ball meaning he didn’t bowl in either inning of the match. What a week he has had, he didn’t need to bowl, he bombed a few sixes of the fastest bowler in the world and now gets to celebrate an Ashes victory.

Pat Cummins touched on Nathan Lyon not needing to bowl in the post-match celebrations.

“I’m really happy as a captain but I’m not too sure Nathan Lyon agrees with me, but that’s been a highlight as well.”

Travis Head won the man of the match for his incredible century in the first innings. He was also humbled by winning the player of the series, it’s an especially incredible achievement when you consider the sacrifice he made by missing the fourth series after contracting Covid-19.

“I’ll look at this century as better, to play a role in the team in these conditions were pretty special.

“I’ve worked on a lot of the last couple of years, and after 19 Test matches I knew what the expectations were, and it helps to be batting below a couple of guys that average sixty.”

After a tough start to his Test career, he is certainly cemented into the number five position and is a potential leadership option going forward. Not too many players have scored two Ashes centuries as well as 357 runs through his four Tests.

"He's still seen as one of the younger players and he has a hell of a lot of experience in domestic cricket, he goes about it a little different to other batters which is his biggest strength. I just want him to go out be free and play his game, you saw that at the Gabba."

Scott Boland may count himself slightly unlucky for not winning man of the series, his 18 wickets came at an average of under 10. He may not play a lot more Test cricket, but this is something he will always be able to remember, he thoroughly deserves everything that comes to him going forward.

What an incredible series we have just witnessed, Australia has matched their result from the 2017/18 Ashes with a 4-0 victory. Pat Cummins becomes the first bowling captain to win an Ashes series for Australia and Justin Langer can always say he is an Ashes-winning coach no matter what happens with his career going forward.

It was simply a dominant series from Australia, even at the SCG where England managed a draw, Australia dominated. If it weren’t for the typical Sydney rain Australia would’ve easily disposed of with the English lower order.

But Joe Root is of the belief England still have improvement within themselves.

"Everyone will look back on this tour and find areas to improve. I think a lot of guys will look in the mirror and haven't given a good account of themselves.

"We've let ourselves down because we haven't given a good account of ourselves, but it is clear at this point in time that Australia are a better team than us and it hurts to say that."

Perhaps the biggest story out of these Ashes though is Cameron Green who has revealed himself to not only be a quality batter but one of the best all-rounders in the world. He averaged 33 with the bat and 15 with the ball, he’s going to be around for a long time yet.

Pat Cummins spoke about Cam Green after the match.

"He's grown as a batter and bowler throughout the series and is as good an all0-rounder as there is in the world at the eh moment, I feel so calm when he's next into bat.

"Internally we've never been worried but being young he needed some confidence and last week he showed how good he is as a batter. And as a bowler he's a genuine fourth quick he has all the skills and I turn to him before I do myself.

"At gully he is incredible but he is young so we have to look after him. He's someone we want to look after we don't want to burn him out."

And of course, we can’t forget the individual achievements of England, Joe Root hit 322 runs admittedly with quite a drop off towards the end of the series. Mark Wood took 17 wickets for England at an average of 26 to push himself right into contention for that number one bowling spot for England.

Pat Cummins spoke on his battle with Mark Wood after the match.

"He was tough to face today and he's been great throughout the series. Today I wasn't too worried about being hit I just didn't want to cop any on the gloves.

"He's also pretty comfortable with the bat so that was a bit of fun."

The focus of the cricketing world now moves onto the women's game with Australia and England also competing for the Ashes. The first match begins in just four days’ time as the first T20 is played at Adelaide Oval, and of course Edge of the Crowd will be here to bring you all of it.