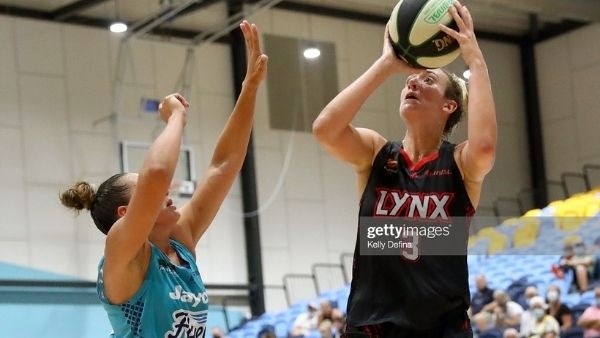 Edge of the Crowd's WNBL Team of the Round: Round 7

After another jammed packed round of basketball, Edge of the Crowd has selected its team of the round from round seven of the WNBL.

Edge of the Crowd's WNBL Team of the Round: Round 7

After another jammed packed round of basketball, Edge of the Crowd has selected its team of the round from round seven of the WNBL.

After a covid caused hiatus the WNBL was back across the weekend with round seven seeing four action-packed matches of Basketball. With the Perth Lynx, UC Capitals Southside Flyer and Melbourne Boomers all taking part in the round.

The Edge of the Crowd has selected its WNBL team of the round for round seven.

Marina Mabrey has continued her fine form into the round, scoring a total of 60 points across the three games for the Lynx.

Despite a quiet game on the scoreboard against the Melbourne Boomers on Monday night which ended early when she was fouled out of the match, it was the game against the UC Capitals that had the league talking.

Mabrey finished the match with 27 points after scoring 18 points in the first half alone, with an accuracy of 52.6% she also had six rebounds and four assists.

The performance put her on the map as one of the strongest point guards across the league with the Lynx only three games into their 2021/22 campaign.

Mabrey was also strong in the Lynx overtime win of the reigning champions in the Southside Flyers, scoring 23 points and having nine rebounds and four assists.

Brittany Sykes (Los Angeles Sparks) has continued her dominant WNBL season in Round 7 despite losing to the Perth Lynx 69-88.

Although there is only a small sample size for Sykes as the Capitals only played in one game, she showed why she deserves to be the top shooting guard of the week.

Sure her shooting stats weren’t spectacular as Perth was able to shut her down from the field. She made 26.3% of her shots (5-19) but was able to put up 12 points and dish out five assists. On defence,she made her ultimate mark with eight rebounds and five steals.

For WNBA fans, these defensive numbers aren’t shocking despite her being a shooting guard. Sykes being able to continuously expose that dominance is what edged her over the competition.

Tiffany Mitchell (Indiana Fever) continued to show why she is one of the best players in the league. The Boomers star and part of Melbourne’s Big Five, yes five because their whole starting lineup is so good, has been the key to a successful 2-0 round.

Despite only shooting 36.4% from the field combined against the Lynx and Southside Flyers, she accounted for clutch shots and brought the spark when the team needed it most.

Even though her shooting mark wasn’t the prettiest she still put up impressive numbers whether it be on the defence or playmaking ability. In this round, she averaged 19.5 points, 3.5 rebounds, 5 assists, and 1 steal to help lead the way for Melbourne.

No other small forward came close to eclipsing her dominant numbers this past round which allowed her to receive this week’s team honours.

WHAT DOES THE LOSS OF JENNA O’HEA MEAN FOR THE OPALS?

Melbourne Boomers Captain Cayla George once again was a stand out for her side during the Boomers two matches.

In total George finished the game on 19 points and was instrumental in the Boomers defensive phase being able to grab those rebounds in the occasions where Perth wasn’t able to sink the shot, finishing the match on 11 rebounds.

In the match against the Southside Flyers, George had 13 points but was once again dominant in the Boomers defensive end with 11 rebounds.

Lauren Scherf is a dominant stretch five for a Lynx team that doesn’t have a traditional centre. Her ability to impact the floor literally everywhere has been crucial all season long and especially this round.

Even though the Lynx went 1-1, Scherf showed out and had defences on their toes. When you’re a post player who can shoot from any given spot on the floor who is also impacting the boards, you have to get your flowers.

In Round 7, Scherf averaged 14.5 points and nine rebounds on 58.6% shooting from the field. The most impressive stat was her percentage from three. She shot 87.5% from three between the two games. Her ability to get open on the pick and pop and forcing opposing centres to guard up was a key factor to her getting this week’s award.

Round 8 of the WNBL kicks off tonight with the Perth Lynx taking on the UC Capitals down in Ballarat with the game set to start at 7:30 pm AEST.