Edge of the Crowd’s March 2022 Playlist

The March 2022 EOTC Spotify playlist includes Yours Truly, Bakers Eddy, joan and many more. Read about our chosen songs here. 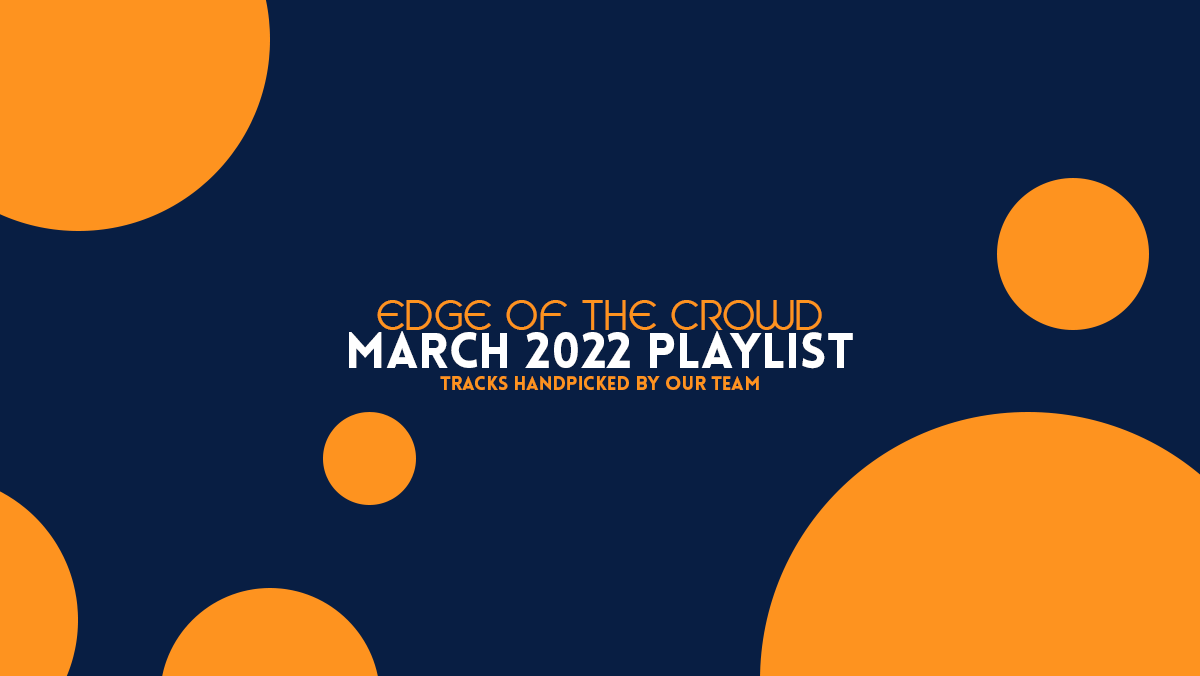 It's that time of the month again, and our team has picked some good ones this month!

Check out our Spotify playlist for some new music chosen by our team. Read about the songs chosen for Edge of the Crowd’s March 2022 playlist below.

Yours Truly -Lights On

Yours Truly debuted this song’s video clip at the end of its set at UNIFY Gathering this past weekend, and realised it officially the day after. This song, and the four-piece’s set itself is showing just how far the Sydney-based band has come in both music and sound, and professionalism, in on-stage presence, and in creativity with music videos.

Lights Onis a song that’s filled with gritty storytelling, the sound and dark undertones reflecting the band’s new direction with its music, with this song accompanying last year’s singleWalk Over My Graveas including such hard, heaving-hitting instrumental moments from each member, none more so than Mikaila Delgado’s vocal ability, hitting the high notes, and performing more gravelling screams.

Even if you’re not a cyclist, this song is still super fun. You can’t help but sing along to “If you’re in a four-wheel drive, you can fuck off” and “My cycle, that’s my line, don’t touch me.” Bakers Eddy is also putting out an album this month, which I will 100 per cent be checking out.

Although the four-piece formed in Wellington, the members live in and call Australia home now so I will be claiming Bakers Eddy as another good Aussie band. Bakers Eddy's debut album,Love Boredom Bicyclesis out on March 25.

joan -i loved you first

Alt-pop duo joan’s 2018 releasei loved you firstis an 80-synth-driven anthem for anyone experiencing heartbreak as their unrequited love falls for someone else. It’s a stunning track with a roaring chorus and raw vocals, with soft contrasting verses that hit home. My favourite part of the track is the guitar solo that leads into a dreamy outro.

While many remember this song as a collaboration with Jason Derulo, Little Mix added a solo version as well to the group's hit albumGet Weirdand it makes for a beautiful ballad. The band has said that the song is for its LGBTQIA+ fans who have had to hide relationships in the past.

This month I’m trying to get into Taylor Swift more, with millions of listeners, I’m surely missing out on something. The cinematic music video forWildest Dreamsis a great addition to the song, it definitely makes me love the song even more.

With only an acoustic guitar and gang vocals on the chorus, Mikey Ferrari details his experiences of fitting in in the Los Angeles social scene inTruth Is. The 2021 release starts with a braggadocious verse, but the longer the song goes, the more his mask fades, and the reality slips out - life in LA isn’t that glamorous. It’s a vulnerable, thoughtful entry that uses juxtaposition perfectly as Ferrari details his experiences in moving to LA.

Lizzy McAlpine -all my ghosts

The narrative element in this song really show Lizzy’s songwriting ability, apparently lots of the things referenced actually happened in real life! I’ve only recently started listening to her music, andall my ghostswas one of the songs that initially drew me to her. If you’re looking for a new indie/alternative artist to listen to, Lizzy McAlpine is your girl.

Australian hip-hop group Thundamentals reinvented Matt Corby’sBrotherin 2012, flipping it from an alternative tune to a hip hop track. You'll still recognise the chorus and the high pitched 'oohs' in the intro, but after that, it's very much the group's own track, with verses about post-breakup heartache taking the centre stage. After The Wiggles'Elephanttook out Triple J's Hottest 100 this year, now is a great time to revisit other Like a Versions from years gone by.

The Wombats -This Car Drives All by Itself

The Wombats’ new album has been on repeat in my recent long commutes, so it makes sense to shout outThis Car Drives All by Itself.Now, I don’t have a Tesla, so no self-driving cars for me. But when you’re made a trip multiple times, it almost feels like the car is driving by itself, you’re just going through the motions.

Obviously, The Wombats are not referencing an actual car - it’s a metaphor for life - but it does make for a fun sing-along whilst in the car. Thoroughly recommend checking out other songs from the band's new album too, there’s some real gold in there.

Angels Don’t Cryis a trap-inspired pop song about loving and comforting someone despite their pain. The 2019 release creates a comforting feeling through the usage of heavenly imagery, as well as her light angelic voice, which contrasts a bassy chorus. A tinkling sound also runs in the background, adding to the lightness of the song. While this description does make it sound like quite a heavy track, it really is beautiful, and worth a listen.

Slowly Slowly -Nothing On

Releasing its first track of the year, Slowly Slowly have shaken up everything fans of the band would’ve come to expect from the four-piece’s sound withNothing Onbeing the Melbourne-based outfit's most pop-inspired song of its discography. The indie-pop dance sound has drawn comparisons to The 1975 - perhaps unsurprisingly as producer Jonathan Gilmore also works with the UK-based pop rock band.

The shift in musical direction does come out of left-field, especially when comparing it to the rest of the band’s discography, but it’s produced well with the groovy guitar riffs, synths and drum patterns that helps it radiate good, mellow, positive, and catchy energy, without shying away from vocalist Ben Stewart’s storytelling with his lyrics.

FRUIT SALAD! THE WIGGLES LIGHT UP ROD LAVER ARENA FOR THE OLDER KIDS

ALTERNATIVE ALBUMS FROM FEBRUARY TO CHECK OUT

After a long wait for its third album, Hippo Campus'LP3is finally out.2 Young 2 Dieis the album opener, and it genuinely took my breath away. The song is quite different to the band's earlier work, which may disappoint some fans but it's nice to see the members play around with their sound and direction.

This upbeat funky track hit the airwaves in 2015, but is one I’ve only just rediscovered.Don’t Worryhas empowering lyrics that makes the listener feel invincible - like they could conquer the world. A plucky bass, cheery brass section, and a groovy drumbeat makes you want to clap and dance away all your worries. It’s such a positive, bright song - no wonder it's made its way into my footy training hype playlist.

The fourth of five singles that have been released ahead of the band’s new albumMaybe There’s No Heavennext month,Armageddonsees the trio of Shaun Diviney, Andy Clemmensen and Bradie Webb go back to their pop-punk roots, synonymous with their late 2000s sound - and the classic pop-punk staple of including some 'na na na's' within the chorus!

The song itself builds as it goes throughout the opening verse, before launching into an infectious chorus filled with drums, guitar and Diviney’s screaming vocals to compliment the fast-paced track, proving that previous singleBurn You Downwas no one-off in regards to his vocal range. The band has already played this track on the big stage at UNIFY Gathering last weekend to a rousing reception, showing the ability forArmageddonto be a song that will go off, no matter the level of the show's venue or crowd size.

Listen to all our March 2022 picks in the Spotify playlist below.