Edge of the Crowd's Favourite Albums of 2021

With so many great albums in 2021, Edge of the Crowd has done the hard work and picked out the best albums to listen to again. 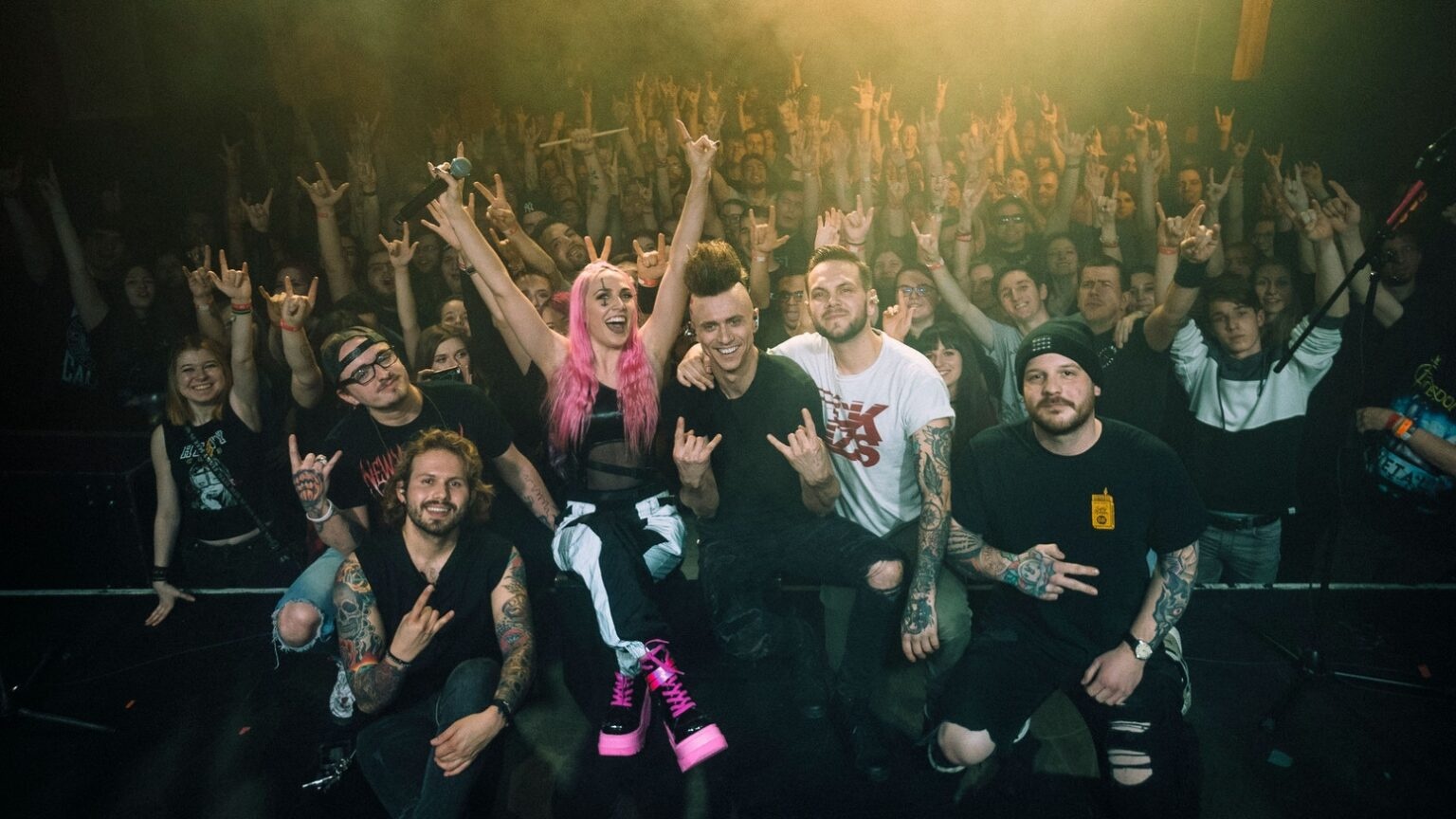 After a blockbuster year for music in 2021, there were so many great albums to recap.Edge of the Crowdhas taken the liberty of bringing back 14 of the best albums from 2021, as they happened.

Nashville-based alternative rock/electro-pop outfit Icon For Hire released their fourth studio album with a 14-track recording that brought together a mix of vigorous energy, as well as stripped-back moments throughout the 39-minute listen.

Even though the band lately has turned away slightly less from their early rock roots of 2011 debutScripted, guitarist Shawn Jump took advantage of the heavier aspects of this album, performing a breakdown inCurse Or Cureand killer riffs throughoutWaste My Hate.

Though, what makes this release so special is, as an independent artist since 2015,Amorphousis the band’s second release without being signed to a label, and just like 2016’sYou Can’t Kill Us, they turned to crowdfunding via Kickstarter.

The campaign yielded 3,214 backers and a collective $263,082 USD - which made it the sixth-most backed, and fifth-most funded ‘rock’ campaign from 7,682 projects under the genre’s tag -, helping build a more well-rounded - both audibly and visually - project.

It’s been a long time coming, but Genesis Owusu finally caught the national attention he deserved with the release ofSmiling with No Teeth.

The album is an eloquent, ferocious, and daring commentary on society, culture, and politics. The great man weaves elements of jazz, rap, and gospel into what is a stellar hip hop masterpiece.

Easily one of Australia’s most entertaining showmen, he has somehow managed to capture the immense energy from his live shows in the studio recording.

And he has been duly rewarded for his effort; not only wasSmiling with No Teethlabelled triple j’s Album of the Year, but Owusu won a whopping four ARIAs including Album of the Year, Best Cover Art, Best Independent Release, and Best Hip Hop Release.

It’s hard to label the record ‘Australian hip hop’ due to the stereotypes that come with the phrase, butSmiling with No Teethis proof that hip hop that comes out of Australia is becoming more refined and being redefined.

Primarily written and produced by the band, the lyrics are reflective of how different the band are since their 2016 debut album. Some major life moments have clearly affected the songwriting process, with Hannah Joy giving birth in early 2020, which thrust two band members into parenthood.

Joy and Tim Fitz’s marriage also influenced the record, with Middle Kids’ first “real” love song,Stacking Chairswritten by Joy about Fitz. The track also acts as a sort of pandemic-esque promise, with lines like“You better hold my hand / There is no map for this.”

Although it may not become as commercially successful as their debut, there’s something comforting aboutToday We’re The Greatest.It begs to be listened to from top to bottom, taking listeners through ups and downs.

2021 was a terrific year for 18-year-old sensation Olivia Rodrigo, who dropped her much anticipated debut album ‘Sour’.

‘Sour’ rocketed up the charts and finished 2021 as Spotify’s most-streamed album, while lead single ‘Drivers’ License’ was the most-streamed song. Rodrigo also snagged seven Grammy nominations, including Album of the Year.

She drew inspiration from musical juggernauts like Taylor Swift, Lorde, and Paramore, creating a diverse, mature sound. This allowed her to divert from the typical Disney-made pop star sound and explore relatable Gen-Z issues like heartbreak and growing up.

It was a terrific start from Rodrigo, and there is much anticipation as to what she will produce next.

Even casual Doja Cat fans should recognise many of the tracks on her third album,Planet Her.Doja Cat’s music is prolific on social media, particularly on TikTok.

It was her November 2019 singleSay Sothat really took off, gaining Doja Cat thousands of new fans by the timePlanet Her’sfirst single was released. The album blends genres seamlessly, with hip-hop, R&B and pop styles shining through.

The album’s first single is the iconicKiss Me More, featuring SZA utilises both artists' vocal prowess and lyricism.Planet Heralso features vocals from Ariana Grande, JID, Young Thug and The Weeknd.

Typically, it would be the collaborations that are the most popular, but Doja Cat has proven she can get the numbers without support. Non-single songs such asAin’t ShitandGet Into It (Yuh)have become fan-favourites, outplaying several of the feature tracks.

The album blends genres seamlessly, with hip-hop, R&B and pop styles shining through. It will no doubt become a staple in 20s playlists in the years to come. If you haven’t listened toPlanet Heryet, get into it (yuh).

​​When Zimbabwean-born Australian singer Tkay Maidza started herLast Year Was Weird Trilogyin 2018 she surely would not have expected that title to resonate with everyone as quite as strongly as it did 2021 forVol. 3.

Amid the weirdness, Tkay had a cracking year including signing to the hallowed indie label 4AD (home to The National and Purity Ring, ex-home of The Pixies and Grimes) and winning the ARIA for Best Soul/R&B Release.

These achievements are richly deserved and overdue. Tkay's genre surfing tendencies, technical prowess and aesthetic vision make her a uniquely easy artist to root for.

Also, LYWW Vol. 3 is brimming with bangers. The club-readySyruppulses over a filthy beat, andKimis a ceiling-raising ode to three iconic Kims (Lil, Possible and Kardashian). These contrast beautifully with her lush R&B songsCashmere(best on album), Onto MeandBreathe.

As Australia's summer continues to heat up, this is an album to be enjoyed with some beverages and friends. A timeless album.

Orla Gartland -Woman on the Internet(August 20)

Funding an album as an independent artist is no easy feat, but in 2021 Orla Gartland managed to do just that. The London-based Irish artist has actively been releasing music since 2013, earnestly writing and producing while navigating the music industry alone.

Her persistence paid off, releasingWoman on the Internetin August 2021, accompanied by a series of retro music videos. Stand-out tracks includeZombie, a song about emotional repression,Madison, a song about Gartland’s therapist, andBloodline/Difficult Thingsfeaturing audio snippets from old family videos.

Gartland also has a Patreon, which helps fund her projects. Those who support Gartland on Patreon have exclusive access to demos, updates, and other content.

Throughout the album-building process, Gartland frequently updated patrons, getting input from them about titles, singles, and more.

No, Lorde’s third album didn’t have the hooks of her chart-conquering debut,Pure Heroine,nor the near-perfect lyricism of her Grammy-nominated follow-up,Melodrama. Nonetheless, this unhurried but deceptively complex album deserves praise.

Solar Powercharts a simple but meaningful course - leaving behind a draining status quo to strive for happiness in nature.

The first three songs on the album (The Path, Solar Power, and California)sketch out this metropolitan life worth leaving, before finding salvation in the sun and solar power. However, she nuances and complicates this journey throughout.

She asks how we can relate to nature when it's been thoroughly commodified (album highlight,Mood Ring), and how we can celebrate it when we know it is finite, ruined by man(Fallen Fruit).

Enjoy these beautiful interlocking narratives and the 90s-influenced sunny production. Don’t stress about prior expectations. Kick back and let Lorde show you the way.

During her pregnancy, Halsey penned her fourth studio album If I Can’t Have Love, I Want Power – an experimental album that earned Halsey their first Grammy nomination.

Despite exploring femininity, it was not a ‘girl power’ concept album. Rather, it communicated their difficulties and experiences, especially those related to childbirth. She collaborated with Nine Inch Nails’ Atticus Ross and Trent Reznor to craft a theatrical, alternative rock album, which strayed from her pop roots. This was successful, thanks to Halsey’s diverse vocal abilities.

Unsurprisingly, the album still charted well despite having little promotion, like lead singles, which is a testament to its’ quality. They did, however, release an accompanying movie that visually depicted ideas expressed sonically.

​​After a swing and a miss of a last album that aimed for mainstream radio, CHVRCHES' fourth album is, if not their best album, their most interesting. A concept album that pairs horror tropes (hence the album's titleScreen Violence) with twin themes of misogyny in relationships and fame.

Final Girlriffs on 80s horror tropes to contemplate quitting the music industry, while album highlight,California, finds punchy melodies in giving up on dreams of stardom.

He Said She Saidis an existential scream at gaslighting andNightmare,with a booming chorus that was "too metal for German radio", is "another ballad that won't make amends".

This is a beautifully dark album that pairs CHVRCHES' plentiful hooks with thematic depth.

Their highly-anticipated third studio albumGLOW ONwas released into the world in August 2021, after fans were given a four-track EP as a teaser in June this year.

The album set the hardcore and wider heavy scene ablaze. It was all anyone could talk about for weeks - how had a hardcore band incorporated so many pop elements and made it work so damn well?

It was unclear as to what was more intense, the dancing or the debate, but one thing was for certain: it was fun to listen to from start to finish. Full of groove and riffs, the album turned in different directions from start to finish but it was undoubtedly a Turnstile record.

And it seemed to end up in the right ear holes; the band began taking in fans from all over the world, not only due to its broad appeal, but through a great release campaign.

Lil Nas X burst onto the scene with viral earworm ‘Old Town Road – a tremendously successful country rap song. However, his debut albumMONTEROproved he is more than a one-hit wonder and a serious artist.

In 40 minutes, he delivered 15 songs across various genres including rap, RnB, pop, and rock, leavingMONTERO’s genre undefinable, a trademark of his music. It’s a bold, authentic album that is unapologetically him, giving a voice to LGBTQ+ youth in a series of viral, catchy jams.

MONTEROwas one of the best, most successful albums of 2021, earning five Grammy nominations. Lil Nas X is definitely here to stay

Many were transported back to the year 2012 with Taylor Swift’s recording of her fourth studio albumReddropping in November 2021. While many songs fans were familiar with, it was interesting to see how Swift would reinterpret her past music.

Although it was the songs that were from the vault that transported many fans back to 2012, with songs likeThe Very First NightandMessagein a bottle having that 2012 pop vibe.

There was one song in particular that took gen-z and that was theAll Too Well (10 Minute Version)which was an extended version of the songAll Too Wellwith the song being the longest song to go Number One, surpassing Don McLean’sAmerican Piewhich was 8 minutes and 37 minutes long.

Australian pop punk princes Between You & Me released their most mature and diverse music to date on their second album,Armageddon.

With everything from dance beats to spoken word, and a hell of a lot of punk jump moments, this album had something for everyone to love.

The build-up to this release was haphazard to say the least, thanks to the band’s label seemingly going AWOL and completely forgetting to promote the album.

But the BYAM boys have done this before, and with a hungry and enthusiastic fan base behind them, they were able to make it a success.

A standout on the album was the third singleButterflies, which had everything you could want in a classic pop punk track. If you’re looking to listen to Between You & Me for the first time, this song is a good one to start on.

Another highlight is Go to Hell, which features fellow Australian pop punk band Yours Truly’s lead singer Mikaila Delgado. The two bands toured the country together in 2018 so it was a full circle moment hearing them recorded on a track together.

After a blockbuster year of music, there were so many great albums, and so many more expected in 2022.