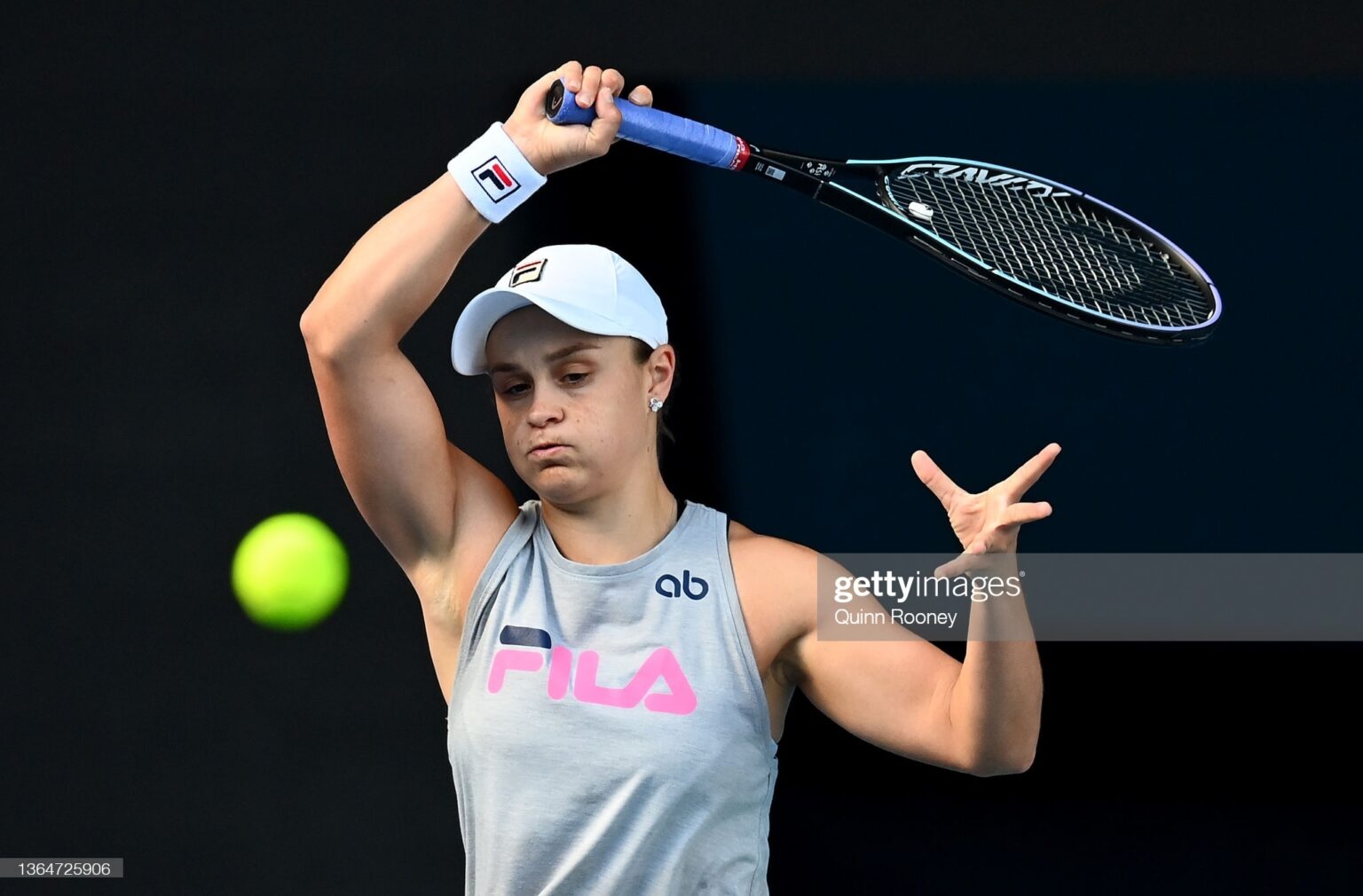 Edge of the Crowd's Australian Open singles players to watch

Edge of the Crowd's Australian Open singles players to watch

The Australian Open is almost upon us and with the tournament being in the news so much over the last few weeks regarding a certain number one in the world. It will be nice to just get some action on the court rather than in a court.

Ahead of the tournamentEdge of the Crowdtakes you through five male and five female singles players who could take home the trophy.

Over the last few years, we have seen her career blossom winning the French Open in 2019 and then Wimbledon in 2021. Success wasn’t always the case though with Barty taking a couple of years off Tennis at one point and playing professional cricket.

Despite being one of the shorter players at the Australian Open she will look to use that to her advantage as she scurries to all corners of the court. What makes Barty so good is a service game that few in the world can compete with. Her previous doubles experience also makes her one of the best volley players on the singles tour.

All of Australia will be rooting for Barty there is no doubt about that, and in front of her home fans, she may still find another level to her game.

From Belarus, Aryna Sabalenka has been on a great run-in recent time reaching the semi-finals at Wimbledon and the US Open towards the end of last year. She will want to go at least one better this time and get to that all-elusive final. Interestingly she won the Australian Open last year but in the women's doubles draw, can she do the same in the signals in 2022?

At just over six feet tall she towers over many of her opponents including Ash Barty, this eight gives her a huge advantage with her service game and serves quicker than most in the women's game.

Her aggressive style of play can be a huge advantage with her angles on the forehand being impeccable, that being said she is also known to double fault and is prone to a number of unforced errors. The key to victory for her will be discipline, if she can stay within the lines she will be a force to be reckoned with.

The French Open winner will be looking to make her form on clay translate onto the hardcourt, she proved at the US Open she does at least have a game for the surface making the quarterfinal in 2021.

She is currently ranked number four in the world; however, she has only been on the grand slam circuit for three years and will be a relative unknown to Australian Open audiences.

Krejcikova, much like Ash Barty is also a much-accomplished doubles player, this gives her the ability to volley and lob at will. Taking from her doubles game she will often use the serve and volley tactic to surprise her opponents and win points with ease.

At five foot ten, she is also a relatively tall player with a very strong service game, she is capable of serving at speeds above 180 kilometres an hour. And of course, keep an eye out for that two-handed backhand that is full of power.

Maria Sakkari of Greece is ranked number six in the world and could challenge for the title in Melbourne. She is coming off great form reaching both the French Open and US Open semi-finals so there is no doubt she has the skills for top tier tennis.

This has been a long road coming though with Sakkari making her seventh Australian Open appearance in 2022. Her improvement has been drastic over the last couple of years which is shown by her overall record of 131 wins and 107 losses in WTA events. The question is whether she can go to the next level having won only one WTA even that being Morocco in 2019.

Maria Sakkari has based a lot of her game around a powerful serve, in 2020 she served the sixth most aces of any WTA player with a massive 144 aces from 31 matches. She also loves a powerful forehand with 48% of her points being scored after a forehand down the line.

The two-time winner at only 24 years of age will be one of the best known and most recognizable players in the women's draw.

There is no doubt of her abilities or star power, the only question might be her form, after bowing out of the French Open in the second round and the US Open in the third round in 2021. That being said she will be looking to defend her crown as the Australian Open winner.

Osaka is known for many things, whether it be politics, activism, or a slew of endorsements but it is on the tennis court where she really thrives.

She might be only 24 but she has more experience at the top level than anyone on the list, while she won the Australian Open in 2021, the highlight of that year for her would have been lighting the flame of the Olympic cauldron.

Osaka is certainly a baseline player who relies on raw aggression and power on the field to win her matches. She has one of the fastest serves in world tennis occasionally reaching above 200kph. The key for victory at the Australian Open will be her stamina, being able to stay at the baseline and hit long rallies in the heat of Melbourne.

Medvedev was so close in 2021, and if it weren’t for he who must not be named he likely would’ve cruised to victory, thankfully for Medvedev and the integrity of the competition the 2021 winner of the tournament will not be competition.

He is coming off great hard-court form having won the US Open towards the end of last year, the question now is whether he can go one further in 2022.

Medvedev also possesses an imposing record of 225 wins and 100 losses, he will certainly go into this tournament as the favourite to take the trophy back home to Russia.

At six foot six, he is a giant on the court, and it allows him to get extra bounce particularly on topspin balls. His style is completely unique with him relying on incredible tennis smarts rather than all-out power.

He may only be 24 years old, but he is one of the more experienced men on the tour and Zverev will be wanting to use all of that experience to get over the top of some particularly difficult opponents. With a career win rate of 69 per cent and over 30million USD in prize money, Zverev will certainly be an imposing figure for anyone he comes up against.

While he has a wealth of experience surprisingly he has never won a grand slam, his best result bei8ng the final of the 2020 US Open. But with one big name already out of the tournament and no that’s not Roger Federer, Zverev will believe he can get much deeper into the tournament.

Zverev relies on his aggression and power game, largely playing back from the baseline. Being six foot six. Zverev can reach a lot of balls others can’t especially in the corners and when the drop volleys come his way. Hardcourt is also his favourite surface with six of his ten titles coming on the harder surface.

Tsitsipas always gets a great welcome on Australian shores with such a large Greek population living in Melbourne, the home of the Australian Open. While the love has always been there the results have not, he will be hoping to change that while holding the hopes of his nation upon his shoulders.

Tsitsipas has only played four Australian Opens having reached the semi-finals twice, hard court doesn’t seem to be his favourite with him only reaching the finals in two of eight attempts in grand slams. However, with an overall record of 189 wins and 96 losses he is clearly a great player who can compete at this level.

While Tsitsipas is defined as a backline player he is much more than that, he has the ability to come to an end a lot more than most baseliners. Mostly though he relies on a powerful forehand to dismiss his opponents, as well as a strong one-handed backhand that often goes right down the line.

What’s this yes that’s right Nadal is still going and going strong at that, he boasts a career win rate of 83 per cent which puts him up there with the greatest of all time. He is glorious to watch and thankfully for all the Aussies they get to watch him at least one more time at the Australian Open.

Having won over 1000 career matches and won over 125 million USD in prize money, Nadal has had a career unlike any other. While we all know his affinity for the clay courts he is more than capable of winning on the hardcourt as he’s proved multiple times in Australia and the US.

Nadal largely relies on power especially from the backhand, while putting more topspin on the ball than any other in professional Tennis. He also has incredible court coverage often sliding around the court while still being able to play up to the net.

A slight outsider Felix Auger-Aliassime wouldn’t be in too many lists of potential winners, but he is in great form and has grown an incredible amount over the last year. He is also ninth in the world meaning he shouldn’t be doubted whatsoever.

His record might not be as impressive as others on this list winning 103 and losing 78 but that will improve with experience. He is also only 21-years-old and this tournament could potentially be the breakthrough for him.

While Auger-Aliassime has said he prefers the clay court, making the semi-final of the US Open in 2021 will give him a world of confidence. He relies heavily on a forehand, using his backhand only to set up the big forehand down the line. He’s certainly one to keep an eye on.

The Australian Open is set to begin on the seventeenth of January, and of course Edge of the Crowd will keep you up to date with all the action.