Edge of the Crowd’s April 2022 Playlist 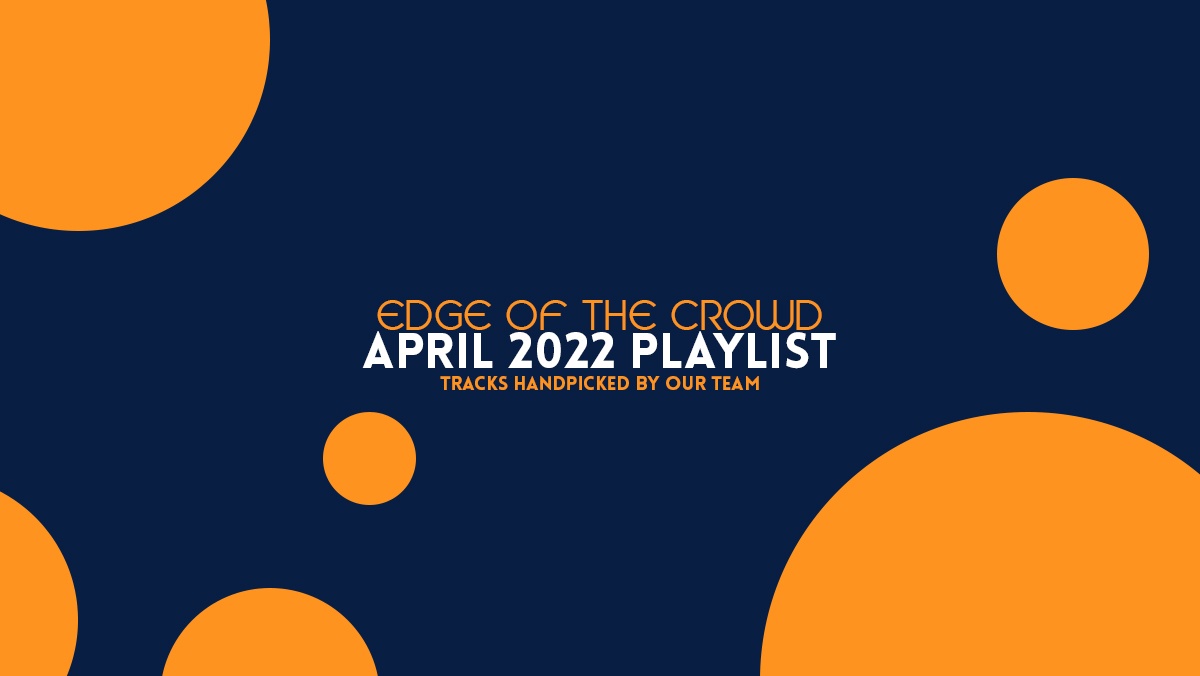 The Edge of the Crowd team was very much in our feels this month, and it most certainly shows in our picks for April 2022 playlist.

Read more about them below.

When I was in high school, Big Bang was absolutely one of my favourite k-pop groups. The impact they've had on me was profound. So when it was revealed that they were finally, actually, officially coming back, I was absolutely ready. After many false alarms (and a Coachella performance that never happened because of COVID-19), the group releasedStill Lifeon April 5. The song is absolutely gorgeous and fills me with warm and fuzzy, but also bittersweet, feelings. It is still uncertain where Big Bang will go from here, we know of some upcoming solo ventures, but I hope that there will be many more amazing moments in their future.

After being teased by the multiple snippets of this song via crowd-filmed videos posted to Instagram from when G Flip played it across their recent tour of North America,GAY 4 MEwas finally released, and all the hype had been worth it. A queer anthem, it’s also a more angsty, edgier song than we’ve come to expect from their music, all the while G Flip’s singing and drumming still remains as a constant.

Lime Cordiale’s newest releaseFacts of Lifehas that vibe that can instantly transport you back to summer with a nice light beat, elements of guitar, and a tune that is insanely catchy.  The song makes for a perfect addition to our April playlist, especially for all our Melbourners who know how insanely cold it can get. Listening to this song takes me back to summer nights and good vibes.

Harry Styles -As It Was

Everyone’s favourite Brit is back with an absolute banger to kick off his new era. It’s a quick tempo, upbeat, vibrant track with a sense of longing that lingers throughout. Styles reflects on the nature of change with 80s-inspired synths backing his vocals. It’s a strong start for Styles and I can’t wait for what’s in store for his next album.

InDangerous, we hear WAAX be vulnerable in a way we never have before. Low-key and half-acoustic, this slow-building track has a real ‘heart-on-your-sleeve’ vibe. It never gets to the loud, rambunctious, and outspoken punk we know and love WAAX for, but this is something truly special. Keep an ear out for the stunning opera-like harmonies in the second half of the song.

This song was often played on one of my favourite radio stations where I went to college. I was introduced to it when it first came out in 2003 but forgot about it until it was played on the radio. When COVID-19 first hit the US in March 2020, I often resorted toOne Thingbecause the lyrics spoke to me. The opening lyric “Restless tonight / 'Cause I wasted the light” spoke to me as I was often super restless and couldn’t sleep because of anxiety and fear of loved ones passing away from the virus. To this day, I still listen to it often on my Spotify.

Stuck Out -Split In Two

It honestly isn’t fair for a band to release one of its best songs immediately after playing a farewell show last month. But that’s exactly what pop-punkers Stuck Out has done withSplit In Two, bowing out in fine form. The song is upbeat, punchy, and pure, reflective of the band’s time since forming in 2015 with the accompanying music video filled with nostalgia, paying homage to the band’s journey to this end point, allowing fans to look back fondly, and hoping for a reunion down the line.

This song is another one I grew up with courtesy of my eldest sister. Although the song is about a dead-end relationship with a partner, it speaks to me in a whole other way. Back in October 2020, I was stuck in a freelance sports job that was part of my dream, but wasn’t the best environment for me. I realized that I was stuck in a dead-end relationship, of sorts, without freedom to be myself in my writing. Looking back and realizing it wasn’t the best fit for me and that I subsequently found places that work for me is why this song is so special to me in that time of my life.

Gatlin -I Think About You All The Time

Anyone who knows my listening habits knows I'm a sucker for a sad love song. This month I've got into Gatlin's discography andI Think About You All The Timeis one of my favourites. Gatlin's use of an extended metaphor in which love is a game is incredible songwriting that makes the song hit harder.

April was a big month for my lil k-pop heart and my love for second-gen groups. 2NE1 was a group that caught my eye since their debut. They, like their label-mates Big Bang, possessed an absolute swagger and charisma that other groups just did not have. I was heartbroken when they disbanded in 2016. Not a single person anticipated that we would get a 2NE1 reunion during CL's set at Coachella. BUT IT HAPPENED. The song still rocks hard, and yes, I was most certainly crying while dancing along. What of it?

5 Seconds of Summer returned in March withCOMPLETE MESS, a title fans may recognise as a reference to a t-shirt worn by Luke Hemmings. The song expresses ideas surrounding the mayhem of a relationship. It also carries 5SOS’s trademark anthemic vibe, highlighting the band’s progress over the past 11 years. Overall, it’s catchy and definitely worthy of a listen.

This beautiful yet heartbreaking song was released on Taylor Swift’s ninth studio album evermore, featuring has a light guitar beat hidden under a beautiful melody. The lyrics themselves contain the element of heartbreak. It's winter vibes make it perfect to listen to while reading a book or relaxing under a blanket.

Camp Cope owns this cover of Sam Fender'sSeventeen Going Under. With lyrics altered to be more specific to the perspective of a young woman in Australia, it's as if the song was written for the band. The way Kelly-Dawn leads the track on bass brings something completely different into the mix, in a good way.

Phantogram’s 2013 releaseBlack Out Daysis a well-executed ode to the glitch pop trend of the 90s, and a certified earworm. The duo utilises glitchy synths and a dwelling bass with heavy but breathy vocals to create a catchy, but intense track. The transition into the chorus is addictive and wants me coming back for more.

Continuing the band’s latest string of feisty anthemic tracks, all-female rockers Teen Jesus And The Jean Teasers’ latest release is a song for women who have been spoken down upon and told to stick to “girl sports”. The concept forGirl Sportsgives off a great energy in responding to any comments and criticisms that come the band’s way, and overall as it remains a relevant topic today. It’s an apologetic anthem that includes multiple instances of giving the middle finger to, and saying a big “FUCK OFF!” to anyone who displays these sorts of comments and ideals.

This is the darkest Stand Atlantic has ever sounded, and damn, do they do it well! The metal guitar riff combined with electronic vocal and instrumental effects would make it easy to compare the song to new-schoolBring Me the Horizon, but this is something completely new. It might be a bit of a harsh first listen for some, but it is an earworm and will have you head-banging in no time.

new grounddiverts away from daine’s gloomy sound to a more resonant pop tune as she explores redemption. Despite carrying a lighter sound, daine’s emo-inspired vocals still take centre stage with guitars and a rolling drum beat backing her up. It’s very much a pop song, but it still carries lyrics true to daine’s sentiment of ‘pop music for emo kids.’

Samia's music has been a constant soundtrack in my life over the past few years.Elephantis slightly cryptic and allows the listener to attribute their own meaning to the lyrics. Samia's vulnerability on the song adds another depth to the melancholy. I'm here for it.

Hard-FI caught me on their hook with their Brit-rock tuneHard to Beat. When I first heard it, I thought it was a lost gem of the 70s or 80s, but it turns out it was a lost 2000s gem. It’s a boastful love song with a catchy hook and an energetic guitar line. Although the lyrics are pretty basic, it’s still a fun listen.

Florence + the Machine -My Love

I am so excited for a new Florence + the Machine album.High as Hopeleft such an impact on me, and you can tell that this new song builds on the musical development she exhibited from then. The message of the song reminds me a little bit of Phoebe Waller-Bridge's titular character inFleabag,when talking to Boo after her mother's funeral (if you know you know). It's a vibe.

Bad Suns -Life Was Easier When I Only Cared About Me

If there was a song I was going to skip down the street to, it would probably beLife Was Easier When I Only Cared About Me. Although the lyrics switch back and forth from positive to negative, the song continues to sound upbeat. I love how the song explores the idea of love in a different way, acknowledging that sometimes love can be complicated even if everything is going well.

Find all the songs in our Spotify playlist below.