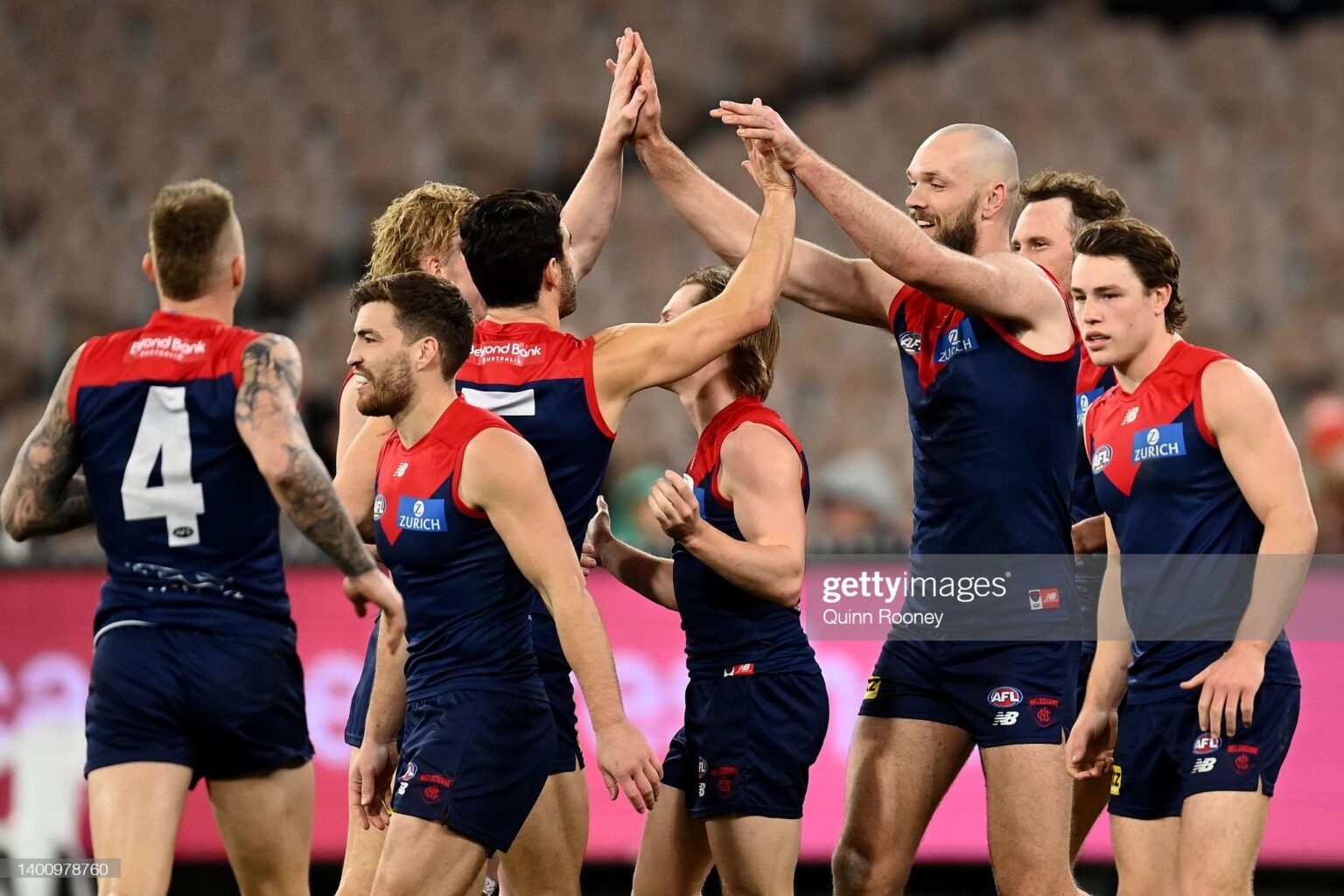 With us about halfway through the AFL season the Edge of the Crowd team picks their All-Australian team of the year so far.

With us about halfway through the AFL season the Edge of the Crowd team picks their All-Australian team of the year so far.

With us now in the second bye round and about halfway through the season the Edge of the Crowd AFL team has picked their All-Australian team of the season so far.

Steven Mayhas been an important cog in the defence for the Demons so far this season, averaging 18 disposals and three marks per game and defensively averaging three intercepts and  5.5  spoils per game. His absence in the last two matches has shown how vital May is to the backline.

James Sicily’sreturn to AFL has been stunning and has played a key role in Hawthorn's rise up the ladder this season, averaging 23.3 disposals and three intercept marks a match.

Tom Stewarthas been the rock in defence that Geelong has needed this season, after his season got cut short in 2021 due to a LisFranc injury, he’s picked up right where he’s left off in 2022. Averaging 8. 5 marks and 25.8 disposals.

Sam Docherty’sreturn to AFL has been inspiring and has picked up right where he left off, being a key in the Carlton backline this season and helping the club in their surge up the ladder. Averaging 28.1 disposals as well as 6.8 marks.

Harris Andrewshas continued his superb form into 2022 being that key cog in the Brisbane backline, being able to lock down some of the game's best forwards. While he doesn’t have as many disposals as some of the other defenders in this side, it’s his defensive pressure that’s solidified his spot in this team. With an average of  7.1 spoils per game and 2.3 intercept marks.

Jack Sinclairhas been a revelation this season, bursting into the All- Australian conversation and has helped the Saints in their rise up the ladder. Sinclair averages 27.7 disposals per game and has an average of  5.7 marks per game. His pressure around the ball is one of the biggest assets to his game averaging 2.5 tackles.

Bailey Smithhas had a fantastic first half of the year averaging 31.6 disposals, 18.5 kicks, 594.3 metres gained and 7.6 score involvements (all ranking elite across the competition). Smith’s strength and running power have been particularly impressive, often helping the Bulldogs turn defence into attack and create scoring opportunities.

Patrick Crippsis back to his very best, inspiring the Blues into top-four contention. His form particularly at the beginning of the season was blistering, predicted to have 16/21 possible Brownlow votes through his first seven games. Cripps is now averaging 27.5, 7.4 clearances and 1.5 goals per game.

Hugh McCluggagecontinues to dominate for the Lions on the wing, he’s rated above average for kicks (13.4 per game), metres gained (359.9 per game), score involvements (6.3 per game) and tackles (5.5 per game). He has proven himself as a great two-way runner and a key asset to this Brisbane team.

Shai Boltonhas emerged as one of the most electric forward/midfielders in the game in 2022, averaging 18.2 disposals, 4.1 clearances and 1.9 goals a match. He has been a critical element of this Richmond side, once again pushing for a finals berth, especially given the absence of Dustin Martin for most of the campaign.

St Kilda’s surge into top-four contention has been largely thanks toMax King’spresence in the forward 50. King is averaging 2.9 goals per game, as well as 2.9 contested marks and 4.1 marks inside 50. While his conversion hasn’t been the best, he is averaging 5.5 shots at goal, which means this man is capable of plenty more goals in 2022.

There is arguably no better small forward in the game thanCharlie Cameron, his speed and knack for goals are on another level. He’s kicked 30 goals through 12 games and continues to be a nightmare for opposition defenders inside 50.

Bailey Fritschhas continued his form from last season, having now kicked 28 goals in 12 games. His versatility makes him a key cog in the reigning premiers’ forward 50 structure, averaging 2.0 marks inside 50 and 5.7 score involvements per game.

Charlie Curnowhas made a huge impact for the Blues this season after battling injury for the majority of 2021. The big man has kicked 37 goals, averaging 3.4 per game (more than any other player). With Harry McKay having his own injury issues, Curnow has stood up, leading the Blues towards the finals.

Jeremy Cameron’sbag of six last week against the Dogs saw him move into the lead for the Coleman Medal. His form alongside Tom Hawkins in 2022 has been terrific. Cameron is currently ranked elite for kicks (10.6 per game), marks inside 50 (3.3 per game) and goals (3.2 per game, 38 for the season).

Forming the most formidable ruck duo in the competition alongside Luke Jackson,Max Gawnhas continued to show why he remains the best ruckman in the AFL. While still averaging 25.7 hit outs and winning 52.8% of hit-outs, he has been ultra-impressive with the ball, averaging 19.9 disposals, 11.7 contested possessions and 4.8 clearances. Gawn has also become a presence in the forward 50 averaging 5.9 score involvements and almost a goal per game.

The bookies favourite for the Brownlow medal,Lachie Neale, has been untouchable at times this year, leading the Lions towards another top-four finish. His contested and clearance work has been outstanding, averaging 16.5 contested possessions and 7.6 clearances. He has been a forward threat with 0.8 goals and 6.8 score involvements per game.

Clayton Oliveris unmatched when it comes to winning the footy in 2022. He is ranked elite across all major ball-winning categories, including disposals (33.8 per game and most of any player this so far), clearances (8.1 per game) and metres gained (474.8). His ability to win the ball on the inside and outside makes him the superstar that he is.