Edge of The Crowd Book Club Review: The Viscount Who Loved Me

Edge of the Crowd’s Book Club selection for March takes readers on yet another promenade through London high-society with Julia Quinn’s The Viscount Who Loved Me, a light-hearted romp of a romance novel. 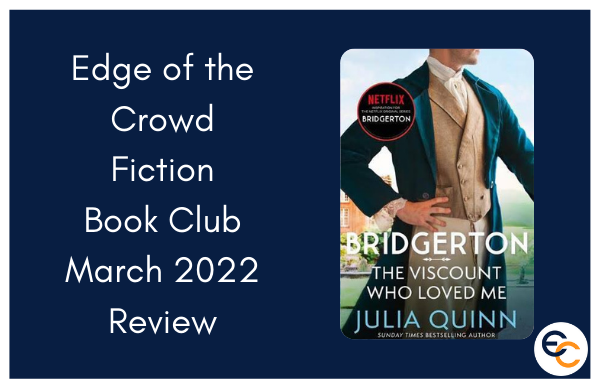 The Viscount Who Loved Meexpands on Julia Quinn’s vivid and humorous take on the Regency novel, and follows the eldest of the eight Bridgerton siblings, Anthony, as he finds love, or at least a marriageable young lady.

Anthony begins the novel with the momentous decision, that at age 29, it is the time for him to find a wife and begin his duty of further expanding the Bridgerton lineage. After a youth of frivolity and womanising, Anthony knows he must instead find a lady of quality to carry the mantle of Viscountess Bridgerton.

Also enjoying a season in London are the sisters Sheffield, Kate and Edwina. Without the security of a large dowry, Kate is keen to ensure a suitable match for her younger sister Edwina, the beauty of the two sisters.

As the ‘incomparable’ of the season, Edwina quickly is surrounded by suitors, including the Viscount Bridgerton. However, the reformed rake is not the marriage Kate intends for her sister.

Is it Anthony’s cynical attitude towards marriage which Kate disapproves? Or is it perhaps Kate’s own feelings for Anthony that prevents her from encouraging a match between her sister and the Viscount?

Although Edwina comments early in the novel, “you truly cannot tell a book by its cover,” (p. 20) you get exactly what you expect from Quinn’s novel, and it is all you could possibly dream of.

The novel continues as Kate and Anthony are swept along in a series of miscommunications and gossip columnists, preventing the true depths of their feelings for each other to be revealed. At least, not until sufficient fanfiction tropes have been utilised, including a particularly revelatory ‘caught in a thunderstorm’ scene.

Quinn’s witty and exuberant writing style dances across the page like a well-timed quadrille and elevates romantic tropes into a novel that deserves every one of its 300 pages.

There are several key revelations in the novel which truly characterise the tone ofThe Viscount Who Loved Me.

The first is that Anthony’s father, the Papa Bridgerton, was met his untimely death due to a bee sting. Although the loss of a parent in a protagonist’s early life is a necessary component of a romance novel, the use of bee is as baffling as it is novel.

The second is that at age 21, Kate Sheffield is considered the spinster sister. I had a visceral reaction to this announcement.

And finally, we do learn the precise definition of a rake. Lady Whistledown, the anonymous gossip of the novel, provides readers the following breakdown:

Anthony is the latter.

With a tone that alternates between baffling and riveting, Quinn has produced a playful novel, with the sweet underlying theme to ‘live each day to its fullest’, lest you a stung by a bee.

Although published in 2000, Quinn’s novel remains in the zeitgeist with the release of season two of Bridgerton on Netflix. Adapted by Shonda Rhimes, the series brings the delights of romantic tropes to a whole new audience. Though best read the source material first.