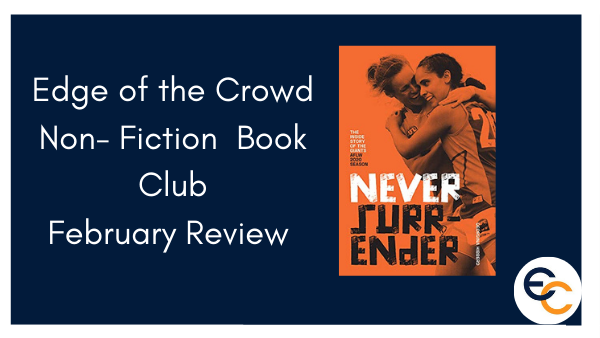 As February draws to a close we take a look at our non-fiction selection for the month, Never Surrender by Georgina Hibberd.

As February draws to a close we take a look at our non-fiction selection for the month, Never Surrender by Georgina Hibberd.

As AFLW started to heat up across the summer Georgina Hibberd'sNever Surrenderwas the Edge of the Crowds February selection and it took us a step closer to the action.

Like the time Hibberd and her partner made the trip from Western Sydney to Morwell to see the Giants take on Collingwood back in 2019, just taking that trip alone shows dedication as Morwell is a few hours out of Melbourne.

The book takes readers into the inner circle of the GWS Giants across the 2020 season, starting from the side's first training session of pre-season in 2019.

The book touches on a number of issues throughout including how the Giants balanced the players' jobs outside of football and the CBA that was signed at the start of the season.

As well as building a professional AFLW team in Sydney with coach Alan McConnell mentioning that they had a few years to build up their program before the talent pool got cut in half with the Sydney Swans coming into the competition.

Being able to hear from the players and coach Alan McConnell directly and unfiltered was a highlight of the book.

Just hearing things from their perspective in such a raw light was refreshing compared to what we see at press conferences and interviews during the week, it was like nothing was off-limits with McConnell discussing things like how he needed players to step up during pre-season and how he didn't think his 30 years of coaching in the men's game was enough for this role.

It was refreshing as it's not something that footy fans are used to hearing with players and coaches being so open.

EDGE OF THE CROWD BOOK CLUB REVIEW: ONE NIGHT ON THE ISLAND

The way Hibberd brings readers into the change rooms before and after matches and team meetings makes it seem like you are in there as well, the way that it's written transports you there almost instantly and it makes you feel like you're a part of that 2020 Giants side.

With that, you ride every high and low throughout the book and makes you feel like you're in that inner circle. From the low of losing to Brisbane by 28 points with that game being marked internally as a way to turn the side around.

To the high of beating Adelaide at home just a few weeks later with that game being marked as a Stand Tall game, which was a tradition from the men's team which was now brought into the Women's program.

The way that Hibberd portrayed the impacts of Covid on that season was great, it felt like readers were going through those motions and uncertainty along with the Giants side.

After that shattering loss against Melbourne and the season was cut short just days later, the way you were able to see the impacts that it had on the women's program, especially the Giants with so many players being forced to go back home after re-locating to Sydney because of the pandemic.

With all the work that was put in throughout the book on the closeness of the team, only for that work to be undone almost instantly when the side had to go back to their home states.

It just showed how important keeping that team together was, with 25 of the players re-signing and while externally it didn't get much praise, reading the book showed just how vital it was.