With The Dropout on Hulu, Edge of the Crowd takes a look at Bad Blood by John Carreyrou, our March non-fiction pick. 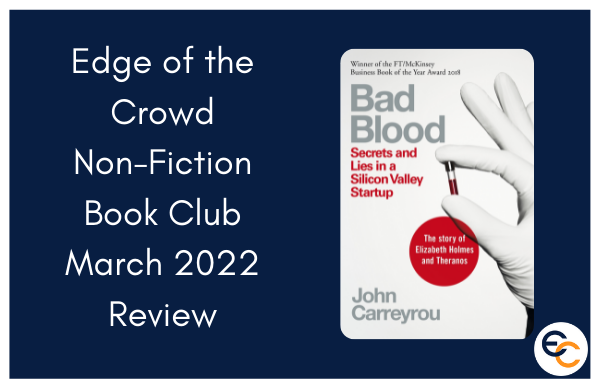 The author, John Carreyrou, is aWall Street Journalreporter who played a pivotal role in revealing the fraudulent practices going on at Theranos.

Bad Blooddetails the entire saga of Elizabeth Holmes' interest in blood testing technologies, and the subsequent rise and decline of Theranos.

Carreyrou writes engagingly about a subject matter that is full of complicated technicalities. He is able to make the intricacies of biotechnology, regulatory intricacies and legal cases accessible to the everyday reader.

Holmes and her cult of personality make for a compelling protagonist. She is reported to be immensely charismatic, to the extent that she is able to secure millions of dollars of funding from a slew of high-profile investors.

Her impetus to found Theranos, while seemingly altruistic, feels just as motivated by pride and ego. Her hero-worship of Steve Jobs, who founded Apple, informed much of her affect and the way she ran her company.

Obstacles the company faces in earlier chapters can be dismissed as commonplace issues that start-ups frequently encounter in their early stages. However, as time passes, greater structural and cultural issues that are causes for real concern become apparent.

Theranos touts itself as a company intent on making blood testing more open and accessible to the public. Yet ironically, its cult-like work environment is shrouded in secrecy.

Employees are kept in the dark about anything and everything in relation to the Edisons, the flawed first iteration of the blood-testing device.

Carreyrou points to many instances of employees trying to do the right thing, only to be rebuffed by Holmes and her then-boyfriend and Theranos COO Sunny Balwani.

Those who attempt to speak out are made to leave, but only after signing ironclad confidentiality agreements. Holmes is portrayed as immensely paranoid, employing mob-like tactics to silence all criticisms of her.

She possesses a tyrannical degree of power over Theranos that overrides all systems of accountabilities that are supposed to be in place. Her single-minded drive and focus holds little regard for people who say no to her, even if they are telling the truth.

Things begin to snowball when the company begins an active bid to commercialise its still-flawed technology. As Holmes hypes up the capabilities of the Edison to investors and potential partners, the stakes increase dramatically.

'Hyping your product to get funding while concealing your true progress and hoping that reality will eventually catch up to the hype continues to be tolerated in the tech industry. But it is crucial to bear in mind that Theranos wasn't a tech company in the traditional sense. It was first and foremost a health-care company.'

Carreyrou's investigation into the company only makes an appearance three-quarters of the way into the book, in Chapter 19, 'The Tip'.

From there the book picks up substantially, racing to the finish line as everything begins to unravel. Holmes ramps up her scorched earth campaign against Carreyrou and his sources.

The book ends with the dissolution of Theranos and the criminal investigation of Holmes and Balwani. However, the saga is still ongoing.

The book is a celebration of the importance of investigative journalism. In an era of news media that is obsessed with virality and stories with short turnarounds, Carreyrou demonstrates the importance of providing reporters with the time and resources they need to talk about what really matters.

Holmes and Balwani did everything they could to prevent the truth from getting out about a product that could have cost people their lives. They had bulldozed over systems of accountabilities and deceived regulatory bodies, and even tried to bury Carreyrou's reporting.

At its core,Bad Bloodis a cautionary tale about Silicon Valley. Compared to other startups, Theranos is not unique in its toxic work culture, regulatory recklessness, and immense ambition.

However, it is the first instance of such grand failure. In this instance, the ends don't justify the means because there is no product.

It is also no surprise that this is a story has been adapted into a TV series, and that there is a movie adaptation in the works. The tale of Theranos is one that would be criticised for being too unrealistic and far-fetched, had someone written it as a work of fiction.

The fact that it is all true is simply proof that sometimes reality can be crazier than fiction.