Uncover the rise and decline of Theranos and its founder Elizabeth Holmes in March's non-fiction book club pick. 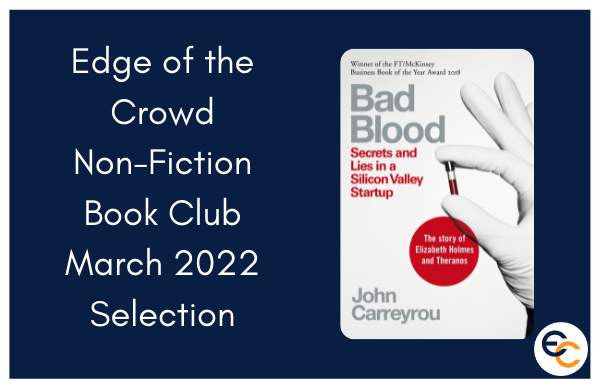 This month's non-fiction book for theEdge of the Crowd'sBook Club is John Carreyrou's Bad Blood: Secrets and Lies in a Silicon Valley Startup.

Theranos was a blood-testing startup that claimed to have created a device that was able to perform extensive testing on a single drop of the patient's blood.

At its peak in 2013 and 2014, Theranos received a $10 billion USD valuation and had a board of directors consisting of numerous former US secretaries of state and senators.

She also developed a cult of personality, becoming known for her deep baritone voice that she employed during public appearances and her black turtlenecks - a nod to her admiration of Apple founder Steve Jobs.

In 2015, Carreyrou published series of articles in theWall Street Journalthat questioned the validity of Theranos' technology and business practices.

The company also employed a wide range of tactics to mislead investors, government officials and the Food and Drug Administration about its technology, including creating a fake lab and going to extreme lengths to conceal any indication that their technology was faulty.

EDGE OF THE CROWD BOOK CLUB REVIEW: ONE NIGHT ON THE ISLAND

We have chosen Bad Blood as our March selection in time for the release of the 8-part miniseriesThe Dropouton Hulu, starring Amanda Seyfried as Elizabeth Holmes.

The miniseries is adapted from the eponymous podcast, which took a deep dive into Elizabeth Holmes and featured interviews with former employees, investors and patients.

The book was published in 2018 and can be purchased at all major bookstores.