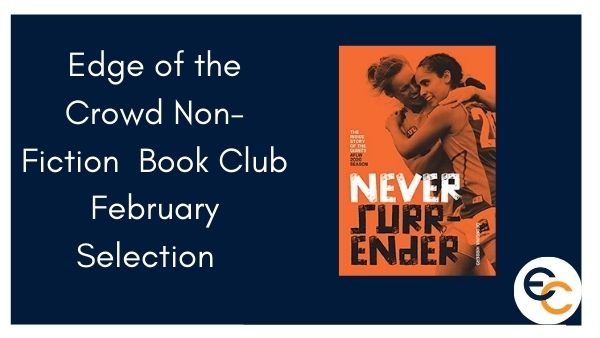 This month’s non-fiction book for the Edge of the Crowd‘s Book Club is Georgina Hibberd's Never Surrender.

Hibberd herself has been a member of the Giants AFLW side since its inception being one of the clubs foundation members.

Although the book follows the ups and downs of the 2020 season it also tells the story of the people behind the players that we see on our screens each week.

While an AFLW season is short, there are still lots of ups and downs with big wins and heartbreaking losses along the way and readers get to ride every one of those bumps with the Giants side through the lens of Hibberd.

The book is dedicated to late Giants player Jacinda Barclay who sadly passed away before the book was released.

The reason that Never Surrender is our February selection is that it’s a timely read due to the AFLW season being well underway.

With many of us avid fans on the AFLW season it only made sense that this was our February selection. So it’s time for the Edge of the Crowd to bring in that Big Big Sound!