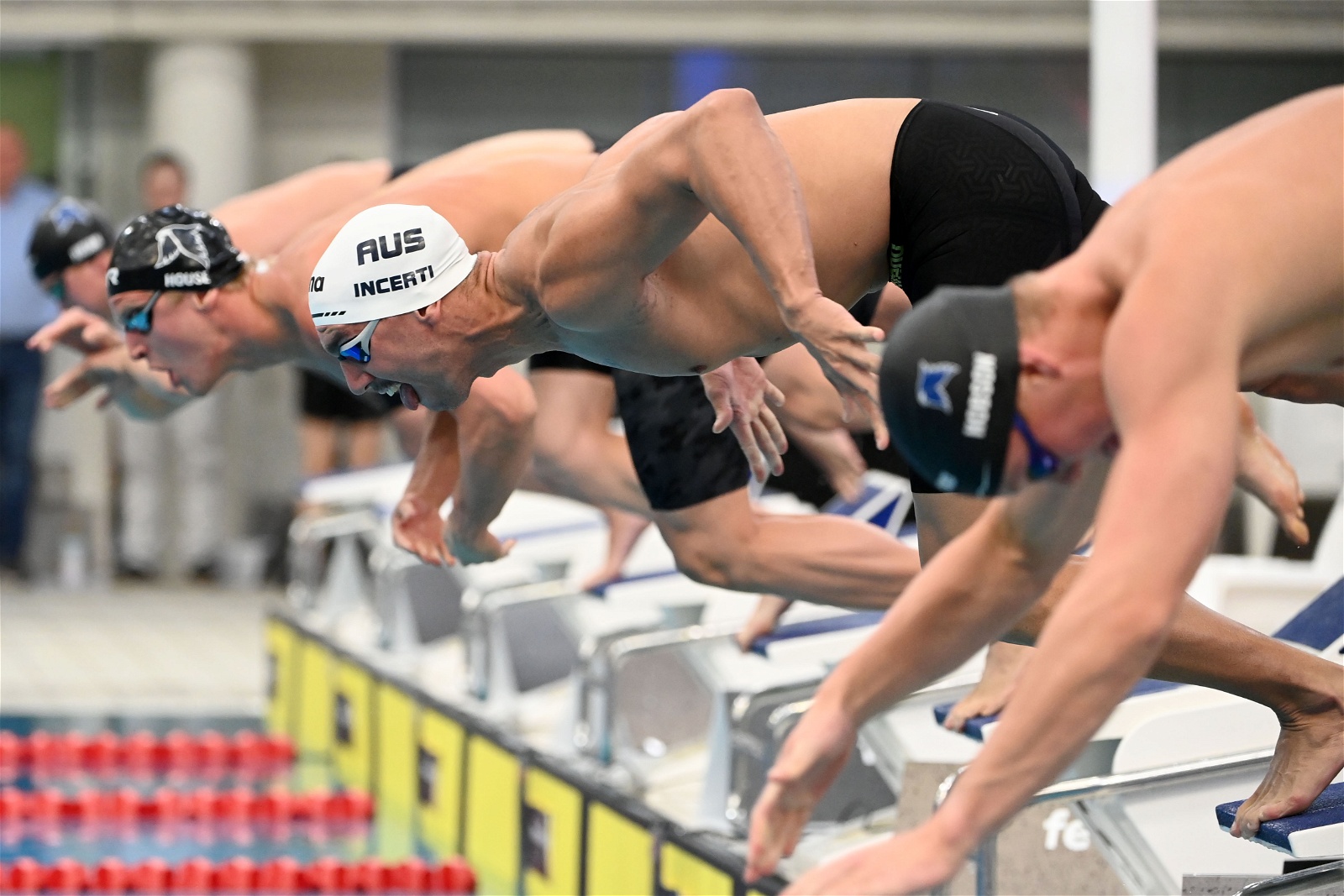 USA smash Australia like guitars at Duel in the Pool

The high-octane meet came to an end with a win for the USA, but swimming was very much the star of the show.

USA smash Australia like guitars at Duel in the Pool

The high-octane meet came to an end with a win for the USA, but swimming was very much the star of the show.

On the final night of Duel in the Pool, there was plenty of fast swimming, but there were times when results took a back seat to the moments of history.

The Aussies started off their night with a clear indication of the key people of the night, as Ellie Cole and Matt Levy led the Australian team onto pool deck, in the last night of their career.

The night kicked off with a 6x50 relay, where three swimmers each swam two 50m legs as part of the relay. Shayna Jack brought the race home to a huge cheer to take the first win of the night for the Australians.

The night was certainly about the scoreboard, as the Australians used their Power Play in the first event of the night.

As the events unfolded, Australia continued to use the tactical 'changes' to try and reduce the gap with the USA, at one point getting as close as two points, but they weren't able to keep up in the end.

Dolphins coach Rohan Taylor said "We thought we had the opportunity today, but they were too good at the end of the day.

"They know how to race and, and how to do the strategy thing a little bit better. But we were going to learn and we're going to hopefully do it again, we've been already talking about trying to, refine it.

"The last few Duels that I've been a part of, way back when, we got absolutely belted, it wasn't even close. So at least it was, we had a close go at it. So back to the drawing board."

There were bright moments in the pool for Australia, as Mollie O'Callaghan, Kaylee McKeown and some of the relay teams shined.

One of the highlight moments was the mystery relay. This time, Australia swam 4x100m freestyle, with Zac Incerti, Cody Simpson, Madi Wilson and Mollie O'Callaghan, while the US team swam 2x200m with a headstart.

O'Callaghan came storming home to take the win, but the event stood out as further innovation. Taylor said after the event that he had taken the idea from Dean Boxall.

"I got it from Dean Boxall, who did it at event camp with the 100 girls and the 200 girls, when they're training," he explained.

"And so when we were putting this together, I threw that one in and said this would be a good, this would be good to do be fun to watch. It was fun to watch them doing it in training, and a couple of girls have done had done it before - Mollie and Madi, so they were aware of what it was.

It capped an eventful few days of innovative racing, and as Taylor explained, the innovation is key for swimming.

"I think we need, as a sport, we need to reinvent our competition, to engage young people," he said.

"At our traditional club swimming meets at the moment are long and all day. You go this from three races and six hours and we want to try to refine it, we can stimulate some ideas, and then also be part of the constant evolution, I think, would be great for our sport."

Another innovation was the mystery medley, where swimmers were given a different order to swim the four medley strokes. Kaylee McKeown held on to win, while Aussie Mikayla Smith showed the difficulties of the event, disqualified for swimming her strokes in the wrong order.

But there were moments tonight when the actual score didn't seem to matter, like the mixed ability relay. In a world-first, able-bodied swimmers and para-swimmers competed in the same relay.

The Aussie quartet of Grayson Bell, Will Martin (S9), Cole (S9) and Emma McKeon didn't quite have the speed to win the event, but it was a landmark moment.

Not long after that historical moment, Australian para-swimming legends Cole and Levy swam their final races, in the mixed-class form stroke 100m.

Neither was the winner, as Australian young gun Martin came home to take victory, but there was a moment of reflection on pool deck for two swimmers who have been instrumental in raising the profile of para-swimming in Australia.

Martin was stoked to be sharing the pool with heroes like that.

"It's been great. I was on the Paralympic squad with Ellie last year, and I was rooming with Matt this weekend, and on the Comm Games squad with Ellie as well, so it's been awesome knowing that I'm working beside two of the greatest in Australian para-swimming history.

Martin also explained that the staggered formats for the multi-class events made it much more enjoyable to swim them.

"Normally in the multi-class events, we go by the points system," he explained.

"You might touch the wall first, but you look up at the board and you only score 700 points, and the person who touches the wall 30 seconds behind you has 900 points, and they've beaten you. You feel a bit stitched up afterwards, but this new staggered system worked out pretty well.

"I do enjoy chasing, you use the wash of them a little bit to take it a bit easy, and then as soon as you pass that wash, you mow them over."

After Cole and Levy's final race, a standing applause rang out, before Cole was chaired around pool deck by teammates, a sign of how much she has meant to the Dolphins.

It was symbolic of the atmosphere of the entire competition. People were there to race, and to swim fast, but they were there to have fun as well.

The exciting racing formats, the small teams, and athletes staying on pool deck all race made for an exciting event.

The USA took home the honours, 309-283, as they remain undefeated in Duel in the Pool history, but the Dolphins are lining up for the next one, and they will have big plans.