Melbourne-based pop-punk band Drastic Park has released a new single and music video for 'Deadline', the concept playing on the innocence of childhood, with the horrors of adult life. 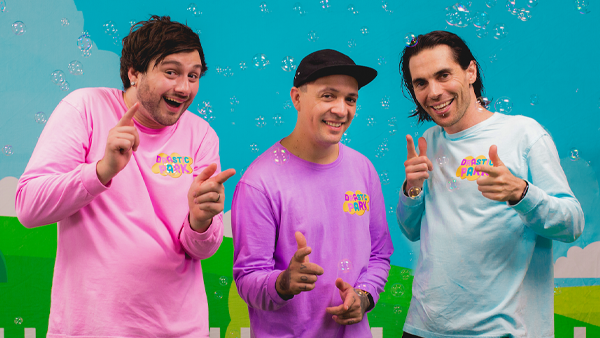 Drastic Park has released its newest single 'Deadline', complete with an accompanying music videoas the band delivers a sound reminiscent of the glory days of the pop-punk genre.

Based in Melbourne, Drastic Park has continued to stamp its footing as one of the country's biggest, and most exciting, up-and-coming bands with the release ofDeadline.

The trio of vocalist and guitarist John Stokes, vocalist and bassist Chris Tannahill, and drummer Joe Larwood all combine to deliver a track that is reflective of the band's pop-punk sound, while also paying respect to the genre's heavy-hitters, none more so than California-based pop-punk band Blink-182.

The catchy, infectious sound ofDeadlineencapsulates the sound that has become synonymous with the genre and influences from other bands, while the music video plays into a tongue-in-cheek concept that parodies kids shows such asPlay SchoolandThe Wigglesand juxtaposes it with the shock of Quentin Tarantino-esque violence.

The song, and music video work together to emit a contrast relating to the innocence of childhood with the atrocities people face as they grow to become adults, mimicking the theme of the track itself: that we're all doomed from an early age.

"Deadlineis a song about being set up for failure at a young age and spending your whole life worrying about deadlines," Stokes said about the new single.

"We are all on a time limit with everything we do in life, including life itself being limited. So comes the second meaning of the song, implying we are all waiting in line for our inevitable death. Therefore, the track purposefully mixes genres and experiments with structure in order to mimic the twists and turns of life."

Having built a large fanbase on the back of a distinct sound that is a throwback to the 2000s pop-punk sound, as well as the trio's comedic antics on stage and social media, Drastic Park released its debut EPImposter Syndromein 2020.

In the past two years, Drastic Park has played a variety of sold-out shows and tours, supporting the likes of DREGG, Antiskeptic, Agnes Manners, Terra, and also embarked on a triple headline tour with Clay J Gladstone and Wolf & Chain. More recently the band performed at Knight & Day Festival.

Drastic Park is about to support US-based pop-punk band Real Friends at Stay Gold in Melbourne on April 27. You can view details of the tour and purchase ticketshere.