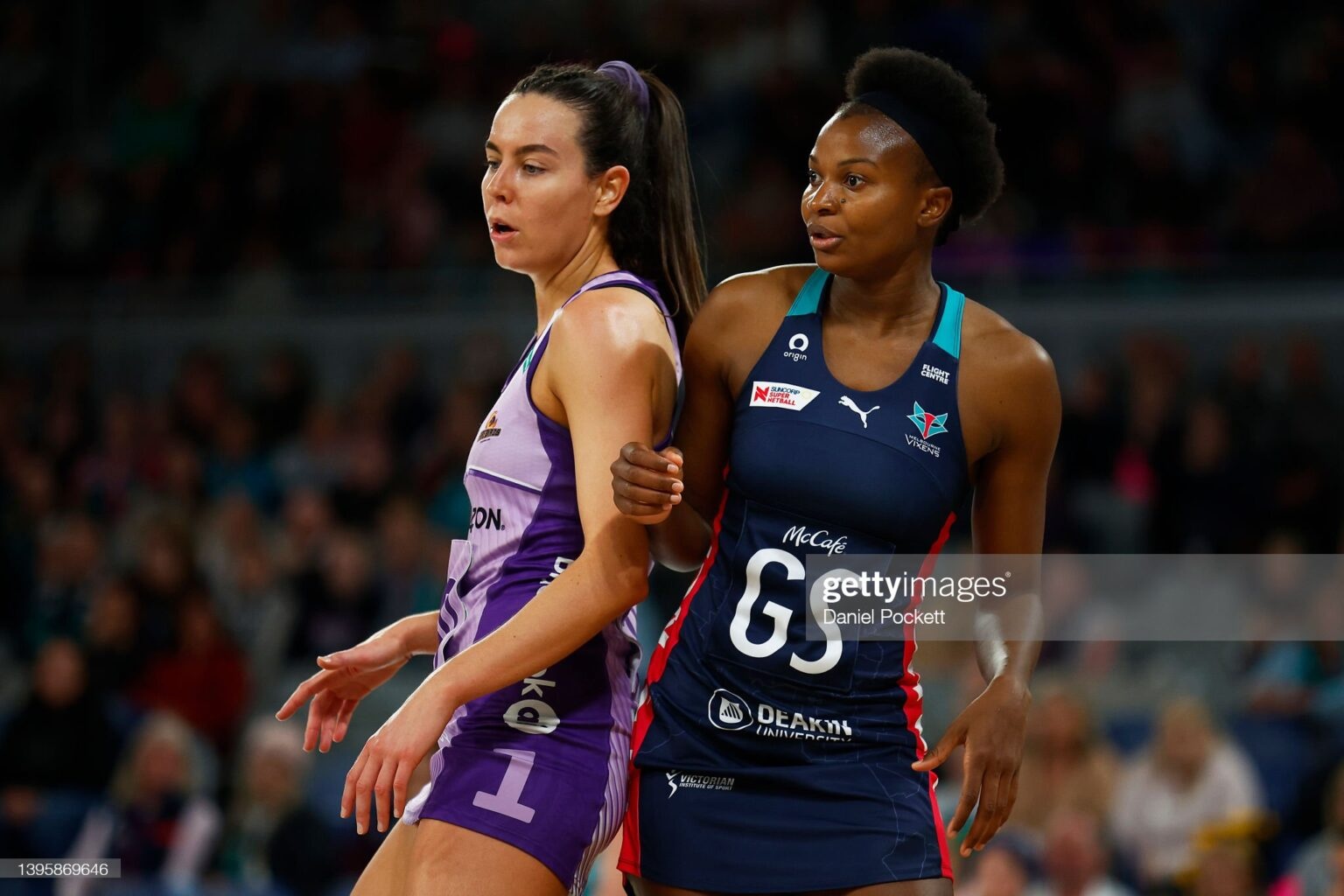 The Melbourne Vixens have maintained their credentials as Super Netball contenders with a thrilling victory over the Queensland Firebirds.

The Melbourne Vixens have maintained their credentials as Super Netball contenders with a thrilling victory over the Queensland Firebirds.

A second-half comeback by the Melbourne Vixens almost came unstuck, but calm heads prevailed as the Queensland Firebirds went down by two goals in a thriller.

The Vixens had dramatic late mail in the morning, with head coach Simone McKinnis a last-minute out under the COVID-19 health and safety protocols. Di Honey stepped in for the Vixens as head coach for the day.

Hannah Mundy and Kate Eddy returned for the Vixens, after missing last week's match due to the protocols.

The Firebirds jumped out to an early lead, ahead 18-15 at the first break, despite the best efforts of Olivia Lewis, who started for the Vixens opposite Donnell Wallam.

The second quarter was more of the same, as the Firebirds jumped out a little further, leading by four goals at half time.

Lara Dunkley was immense for the Firebirds early, eventually forcing a change that saw Kate Moloney moved to wing defence to combat her, as Hannah Mundy was injected into the game.

The Vixens came out of half time with a vengeance, and immediately cut the gap to two goals, as Megan Anderson was forced to take a time out less than 120 seconds into the third quarter.

While it did stem the bleeding, it was clear that the momentum of the match had shifted, and this was not going to be one-way traffic in the second half.

The Vixens started to find their way in the second half, as Hannah Mundy brought a calm to the court, and Kiera Austin and Mwai Kumwenda continued to rack up the score.

The Vixens won the third quarter by three goals, and started the fourth well, bringing the scores level in the first 30 seconds, and then jumping out to a two goal lead.

A see-sawing final quarter saw the Firebirds take the lead at the midway point, before the Vixens came back and grabbed the lead in the dying stages.

Two late super shot misses by Wallam proved crucial, as the Vixens snuck away to the buffer that would give them victory, despite a late charge in the final two minutes.

Two late super shots by the Firebirds weren't enough to pull the margin back, as the Vixens held on to win by two.

After the match, Firebirds coach Megan Anderson was circumspect about what her team could take out of the result.

"I know the Vixens are a great side, and its really hard to get ball off them, and I think we did a really good job in the first half and we converted on the turnovers that we got, mostly in the first half.

"Just finishing off the match there was a little disappointing, but its something we can learn from, and such a great team - they’re at the top of the table so its good for us to have that battle tonight and learn for the next few rounds."

Anderson was disappointed her team wasn't able to capitalise on their momentum when the Vixens did challenge them.

"I thought we were going to put our foot down in that third quarter where they got to within one, and then we pushed out again to four.

"I really would have liked us to put the foot down there, but we allowed them to get back within one going into the fourth quarter, and just created that real armwrestle in the last quarter.

"We’ve got three newbies in our team, and it will be great learning for them going forward."

Despite the lack of experience, Anderson believes that her side can take plenty from the matchup against the Vixens.

"They’re one of the teams that are super safe with the ball, and, they’ve been in a winning culture and they know how to win, snd that was obvious tonight.

"That's something we need to learn from, and just trust our processes and that will come through at the end."

Stand-in Vixens coach Di Honey had enjoyed the experience of coaching, but reflected that it is a very different experience to being an assistant.

"I thoroughly enjoyed it," Honey said. "It was pressure city - its easy being the assistant but I enjoyed every minute of it. It was a tough battle out there but the girls, that last quarter was sensational and what we asked for and they delivered, so I’m rapt."

Despite the win, Honey will not be letting the Vixens get ahead of themselves.

"We’ve just got to go back to doing the hard work at training and obviously focusing on them, but its our game and what we have to do against the opposition."

As for the player returning from COVID-19, Honey was thrilled with the return of both players with good form.

"Hannah [Mundy] was sensational when we brought her on, which was good, we just did a change up with Kate Eddy, we just thought we needed to change that midcourt, and thankfully it worked. They came back and did their job really well."

The Vixens are now a win clear at the top of the ladder (pending the West Coast Fever's game), while the Firebirds remain in third.