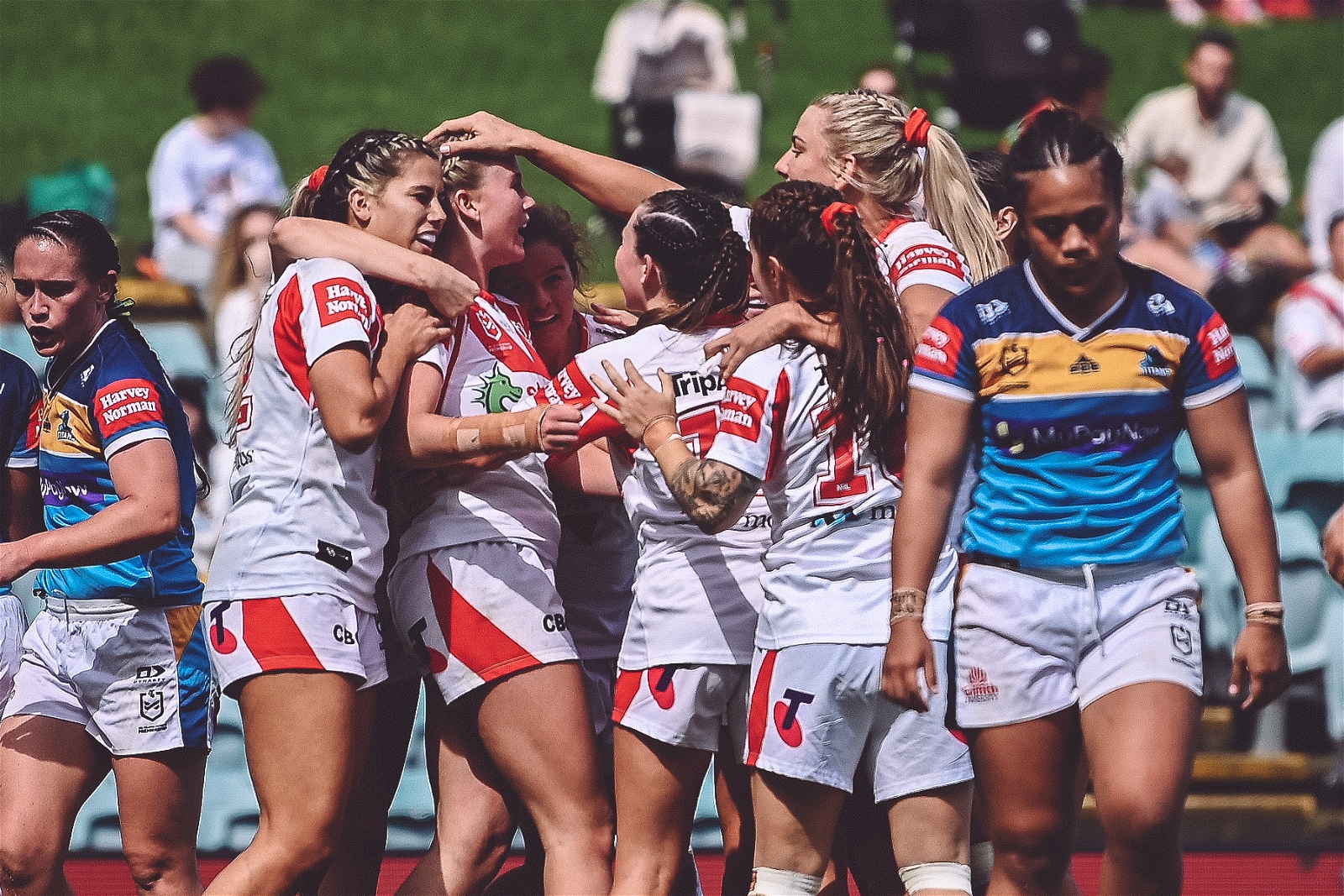 The Dragons were the first side through to the NRLW Grand Final, after taking down the Titans at Leichhardt Oval.

The Dragons were the first side through to the NRLW Grand Final, after taking down the Titans at Leichhardt Oval.

The Dragons have become the first team through to the NRLW Grand Final, after taking down the Titans 24-18.

A knock-on gave the Dragons a set with excellent field position early in the game, but some tough defence from the Titans, particularly Evania Pelite, prevented Teagan Berry from a linebreak.

However, an error from Berry on the other side of the field set the Titans back up for a scoring chance of their own. Steph Hancock took the position and broke through numerous tackles to get to the line.

The Titans continued their strong performance, with another scoring chance after a Dragons error, but a knock-on prevented them from grounding.

After some error-filled play from both sides, a dangerous tackle penalty for the Dragons set them up for the next score, as Madison Bartlet broke the line for a try, making her leading try scorer for this season.

The conversion was missed, but Emma Tonegato was next on the scoreboard, to give the Dragons the lead.

A linebreak and a dive over defence for Jaime Chapman was the next event on the scoreboard, to open the scoring for the second half.

Dragons coach Jamie Soward was impressed by Davis, both during this match and across the season.

“I love Keeley, she’s such a competitor," Soward said.

“I think at times she shows why she’s such a class player, and how she also shows how much more she has to go.

“She scores her first try and sets up another one and she’s such a vital piece to us at 21 years of age.”

However, the Titans weren’t going home without a fight, with two tries in the dying minutes. This reduced the deficit to just six with 20 seconds remaining.

This proved not to be enough, as the Dragons advanced to their second NRLW Grand Final.

Season not over for the Roosters after win over Eels

While this season was around his expectations, Titans coach Jamie Feeney was frustrated with the result.

“It’s huge for us, and i want them to be proud of the effort they put in.

Despite this result, Feeney was very impressed with how hard his players and other NRLW players work.

“They live a harder life than the boys, 100 per cent. They balance footy around their life - they don’t balance life around their footy. That’s the thing that no one gets.

“I’m constantly in awe of what they do, and amazed by it.”

Feeney also had high expectations for his squad in future seasons

“I think the second season will be great for us”

For the Dragons, however, all eyes turn to the Grand Final, where they will be taking on the Sydney Roosters.

Coach Jamie Soward admitted that this exceeded his expectations for this season.

“I expected to come in and make the finals - to win this game this week was a very proud moment for the club,” Soward said.

“I think with this game, having been here as a player, it’s so hard to prepare for because you know what's on either side, win or loss.”

Dragon’s Captain, Kezie Apps was also proud of the squad, and how tight they became over this season.

“We pushed through, we worked for each other and here we are going into the grand final.”