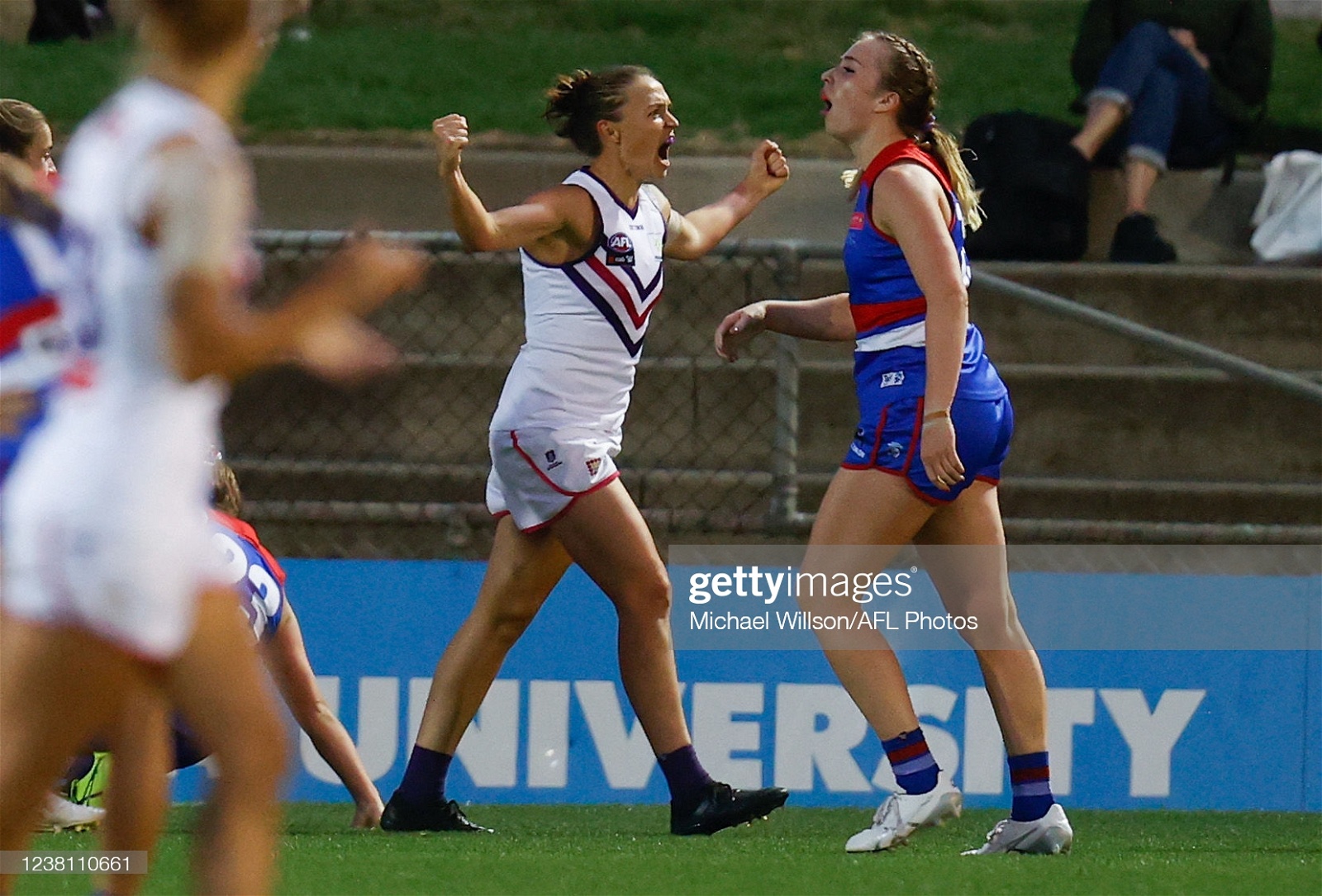 Ebony Antonio's match-winner keeps Fremantle undefeated and on top of the AFLW ladder after an intense, high-pressure scrap against the Western Bulldogs.

Ebony Antonio's match-winner keeps Fremantle undefeated and on top of the AFLW ladder after an intense, high-pressure scrap against the Western Bulldogs.

Fremantle has kept its perfect record and remain on top of the AFLW ladder after a scare from the Western Bulldogs at VU Whitten Oval on Tuesday.

All evening, it was a constant, tight, battle but Ebony Antonio’s class exhibited itself once again, kicking an impressive goal en route to defeating the Bulldogs 2.7 (19) to 3.7 (25).

It wasn’t pretty, or high scoring football, rather it was a tough contest from both sides with the Bulldogs silencing a key component of the Dockers' game.

The Dockers lead the competition in clearances, but the Bulldogs beat them at their own game, finishing 31-19 in that area.

However, their signature tackling pressure didn't waver and was noticeable in the first term. Fremantle dominated the count 74-44, with Kiara Bowers accounting for 12 of the tackles.

Fremantle controlled play in the first quarter, keeping the ball inside its attacking half while dominating and defending territory behind play. Despite this, no majors were scored, despite there being ample opportunity for the Dockers.

Debutant Amy Franklin opened the game’s scoring in the second stanza, kicking two rapid-fire goals. She handled the match’s pressure well, as each of her five possessions and two marks were contested.

But the Bulldogs halted the Dockers' scoring momentum, kicking two goals of their own, making a quick reply through Bonnie Toogood and Kirsty Lamb, who kicked the quarter’s final goal.

Bulldogs skipper Ellie Blackburn worked hard to give her side the edge at halftime but failed to convert two shots, levelling the score. At the main break, the scoreline read 16-all.

The second half became a desperate, high-intensity scrap between the sides. Goals were sprayed on both sides, due to the lack of aerial flow and pressure below the knees.

Bonnie Toogood, Kirsty Lamb, and Ellie Blackburn tried to take scoring matters into their own hands for the Western Bulldogs but couldn’t hit the target. Likewise with Fremantle’s Roxy Roux, Gemma Houghton, and Tiah Toth.

But in the match’s final few minutes, Ebony Antonio’s class shone through as she beat her opponent and used the wind to kick the game-sealing goal.

Kiara Bowers, Hayley Miller, and Gabby O’Sullivan continued their stellar seasons, while Emma O’Driscoll was strong under pressure down back.

On the other side, Celine Moody controlled a lot of the aerial battle with Elle Bennetts, threatening to carve up Fremantle along with Blackburn, Toogood, and Lamb.

Gemma Lagioia and Matilda Sergeant were helped off the ground with suspected concussions.

The Western Bulldogs will continue its search for its first win of the 2022 AFLW season at home against Richmond on Sunday, while Fremantle heads to Tasmania to face North Melbourne.