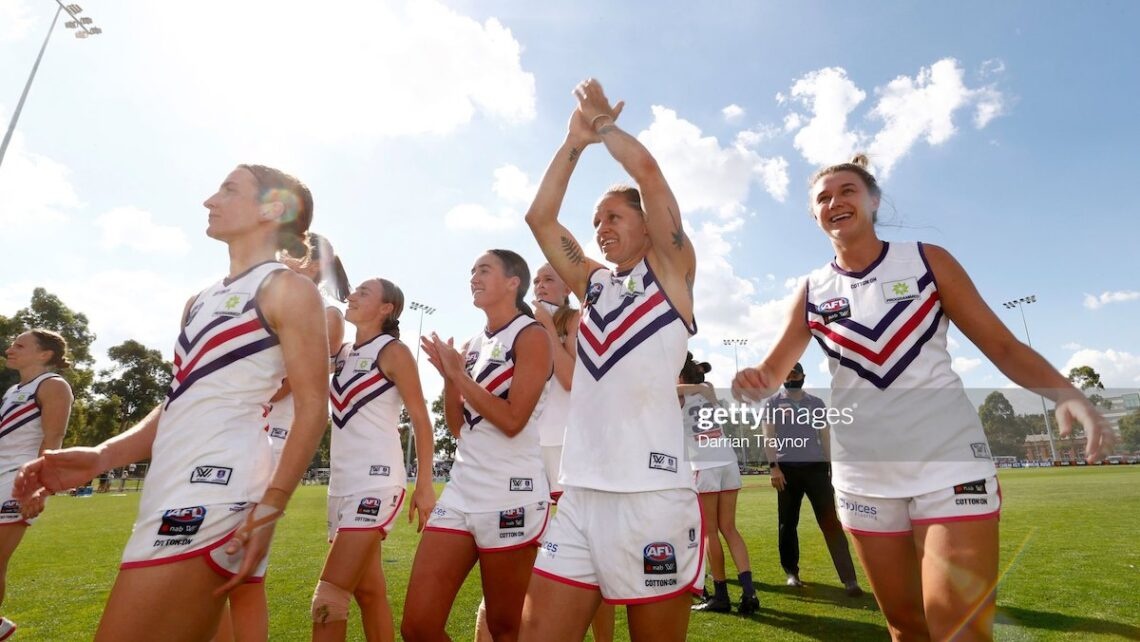 It was the Fremantle Dockers who dominated their qualifying final match up with the North Melbourne Tasmania Kangaroos to move through to the AFLW preliminary finals.

It was the Fremantle Dockers who dominated their qualifying final match up with the North Melbourne Tasmania Kangaroos to move through to the AFLW preliminary finals.

The Fremantle Dockers will move through in the AFLW finals series after a 38 point qualifying final win over the North Melbourne Tasmania Kangaroos.

In a battle of fourth against fifth, where the winner would move on to tackle the Adelaide Crows, it was the Dockers who dominated defensively and kept their forward structures for an impressive win over 2022 challengers the Kangaroos.

The Kangaroos finished fourth, above the Dockers, to earn the right to host their first final at Arden St, after hosting a semi-final at IKON Park in the abandoned 2020 season.

At selection, Fremantle made two changes, welcoming back All-Australian key defender Janelle Cuthbertson - who has spent time on the sidelines with a broken jaw - versatile midfielder Bianca Webb.

Ellie Gavalas kicked the opening goal for North Melbourne, a ridiculous goal thrown on the boot on the boundary line. The snap made it through the big sticks without being touched, an impressive effort!

Roxy Roux responded for the Dockers. Aine Tighe hit Roux up on the lead and the forward slotted her first for the day from short-range.

The Kangaroos were unable to capitalise on further chances in the opening term but held a three-point lead over the Dockers at the first break.

The Dockers lifted in the second term for a patch of really strong play, where Gabby O'Sullivan put the Dockers in front with a comfortable set shot goal.

Dana East added another, and it was clear the travelling side were well on top.

That surge was squashed, though, as the Kangaroos took control of the game again. Sophie Abbatangelo and then Tahlia Randall kicked truly to put their side back in front.

The contest was on heading towards half-time with another goal to the Dockers, through Gemma Houghton. Quick ball movement was key for the Dockers there, they pushed through before lowering the eyes to hit up Houghton.

Another brilliant passage of play, that saw O'Sullivan use her pace to burst through half-forward and hit up Hayley Miller, was finished off beautifully.

Miller took the mark exceptionally well, she's always so strong overhead, but this one was almost too far over the top, somehow the mid-turned-forward brought it down.

The late goal gave the Dockers a nine-point buffer going into the break.

Prepared for the momentum shifts, Fremantle wanted to use its strengths, especially its fitness, to surge the ball forward in the second half.

And they did so. Mikayla Hyde hit the scoreboard for the first major of the third quarter, before Webb's return to the side was made all the better with a goal off her own boot.

One more to the Dockers in the third, a coast-to-coast passage that Tighe got on the end of, and they had stretched out to a strong 25 point lead.

MELBOURNE AFL SEASON PREVIEW: CAN THEY BACK IT UP?

North Melbourne added just two behinds in the first third quarter, a disappointing term that they were quick to try and put behind them in the fourth.

Kim Rennie was ruled out of the game with a concussion as well in the third, putting the Kangaroos down a rotation for the last.

Cuthbertson's return was appreciated in the Dockers' side, she finished with 12 intercepts, an incredible individual effort as part of the team's dominant defence.

Captain Emma Kearney was thrown into the middle, after spending the year on half-back, to try and lift her side. It was do-or-die and they needed something to lift.

Her impact through the middle was immediate. Kearney took the ball into the forward 50 and hit up the target of Jasmine Garner.

Garner rushed her kick at goal, feeling the heat of this final term and the task ahead of North, but she still managed to put it through to bring the margin back to 19.

Fremantle hit back impressively through Kara Antonio, who got on the end of strong transition football. That margin only increased when Hyde got her hands on the footy with the goals in her sights, to slot a second for the day.

After Fremantle intercepted the footy in its forward 50, Kara Antonio found wife Ebony for an easy shot and certain goal.

The Dockers won by 38 points to book their place in their second AFLW preliminary final, but this time they'll actually get to play it after the 2020 finals series was cancelled at the beginning of the pandemic.

They'll be sweating on the fitness of Sarah Wielstra; her day ended in the second quarter with her boot off and ice on her ankle. Luck might be on Wielstra and Fremantle's side if the other qualifying final isn't played until next weekend, as an extra week before the preliminary finals would help her chance of playing.

With the loss, it's season over for North Melbourne, who have battled well this season for a 7-3 regular-season record and a third final's appearance in its four years in the competition.

The Fremantle Dockers will travel to South Australia to play the Adelaide Crows in a preliminary final, one win away from their first AFLW Grand Final appearance.